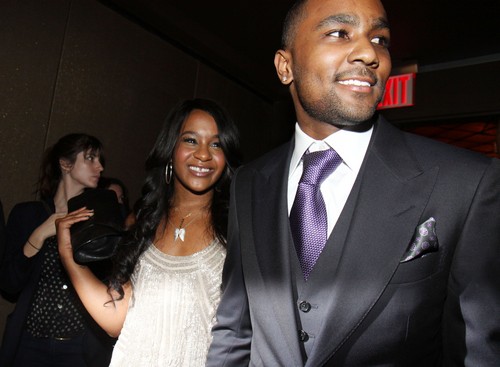 With so many conflicting reports on Bobbi Kristina Brown’s condition, it’s tough to know how well the 21-year-old daughter of Bobby Brown and the late Whitney Houston is actually doing. However, we do know that her connection to Nick Gordon was bad news. According to Radar Online, a man who went to school with Nick has kept in close touch over the years and has seen their chaotic relationship firsthand. The man didn’t want to be identified, but he recently gave a tell-all interview to The National Enquirer about the destructive path Nick put Bobbi Kristina on.

The close friend claims that both Nick and Bobbi Kristina have used drugs in the past. He noted one particular incident where Nick and Bobbi Kristina smoked crack at another friend’s birthday party. He also said the couple had been in a “self-destructive cycle for a long time.” With some news outlets reporting that police found drugs at Bobbi Kristina’s home after her recent incident, it’s no wonder that she was found unresponsive in a tubful of water.

However, there may be another issue that led to Bobbi Kristina’s current state. The close friend also says that Nick and Bobbi Kristina were having relationship troubles recently. He even claims that Nick and Bobbi Kristina had been sleeping in separate bedrooms because of their constant fighting. It’s also worth mentioning that police were called to their Roswell home on January 23 after a reported domestic dispute. No one was around by the time law enforcement arrived.

The man states that Bobbi Kristina had texted another mutual friend about the possibility of leaving Nick in the near future. Bobbi reportedly felt that things just weren’t working out. He says she had dreams of moving to California and fulfilling a lifelong dream of becoming a singer just like her mother, Whitney Houston. Since Bobbi Kristina remains in critical condition at Emory University Hospital in Atlanta, we’ll have to wait to find out if she still has a chance to make that dream a reality.