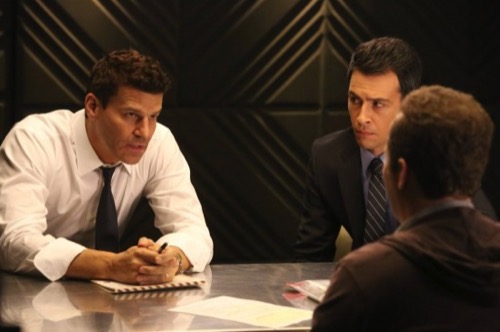 Tonight on FOX Bones airs with an all new Thursday October 15, season 11 episode 3 called, “The Donor in the Drink,” and we have your recap below. On tonight’s episode remains found at a fish farm coincide with Brennan (Emily Deschanel) and Booth (David Boreanaz) returning to their jobs at the Jeffersonian and the FBI, respectively, and it’s revealed that some of the victim’s organs were harvested before he was dumped in the water.

On the last episode, Booth was still missing, but the team learned that Agent Miller had hidden information about his whereabouts and physical state. Meanwhile, a digital forensic scientist helped Angela tried to decipher information pertaining to Booth’s location and the circumstances of his disappearance; and Arastoo made a decision that will change his and Cam’s personal and professional relationships. Did you watch the last episode? If you missed it, we have a full and detailed mid-season finale recap right here for you.

On tonight’s episode as per the FOX synopsis, “remains found at a fish farm coincide with Brennan and Booth returning to their jobs at the Jeffersonian and the FBI, respectively, and it’s revealed that some of the victim’s organs were harvested before he was dumped in the water. Meanwhile, Hodgins urges Angela to exhibit her photographs; Cam deals with her decision to choose work over romance; and Booth finds Aubrey in his old office.”

Tune in at 8PM EST on FOX to watch Season 11 Episode 3 of BONES. We’ll also be updating fans right here as the show airs so be sure to check back in with us. Brennan and Booth have had a long television run. Do you like that their characters mix up business with home life? Hit up the comments and tell us your thoughts about their tangled relationship!

Two women went out to their town’s nearby fish farm because they heard about the trout there. Trout are carnivorous and it’s known that they often eat dead skin right off the body. So the fish should have left the ladies’ feet feeling smooth like a fresh pedicure. However one of the ladies ended up her foot right through someone’s corpse.

The corpse belonged to Lloyd Nesbit. They were able to identify him thanks to his handlebar mustache and from all appearances their victim didn’t have an enemy in the world. Nesbit was an inventor but unfortunately his latest invention to take off was over twenty years ago. The Flexibox. It was a mailbox that couldn’t break and could easily bend. And for a while it brought in money until one day that was no longer the case. So Nesbit hadn’t earned a dime off anything else and the royalties for The Flexibox have longed dried up. Yet Hodge told his friends that he admired Nesbit for his gumption.

Nesbit never gave up despite all the setbacks. He continued to be an inventor to the very day he died and so Hodge felt Angela could learn a little something from their victim. She had recently gotten into photography and she’s good. Though for some reason Angela was hesitant about showing off her work so her husband went behind her back and booked a showing for her.

Angela wasn’t with him for doing that but she understood her husband just wanted to support her. So not only was she working on Nesbit’s case, she was also preparing for her first show. That she made Hodge promise would be small.

So Bones first day back on the job was same old same old. Angela and Hodge were caught up in their subplot and she got to clean skin off of bones again. But there wasn’t something missing from Nesbitt’s body. Several vital organs had been surgically removed.

Initially Bones and Cam thought the trout had gotten to the organs though that didn’t explain why only some of the organs were gone. Thus the mystery didn’t clear itself up until they found a fragment of the scalpel still inside of their victim. And that’s when they knew for sure that they were dealing with the illegal organ trade.

That’s when body parts are harvested and sold on the black market to people too desperate/critical to wait on the universal donor list and are willing to pay whatever fee is necessary.

And that’s the type of world that Booth had to investigate from his new desk. Apparently a lot has changed since went into retirement and came back again. His old office was given to Aubrey because his former protégé made a name for himself and so, while the bureau was getting another office ready for him, Booth had to work outside amongst the cubicles. Which wasn’t doing anything for already high stress levels.

Jared Booth’s ashes had been misplaced and the funeral home couldn’t find him. So Booth was going out of his mind to find his brother’s ashes and in the meantime he had to go down a rabbit hole to find out who had received Nesbitt’s organs. And he found a father that just so happens to work at the insurance company Nesbitt used and have a sick daughter.

However Rodney Dale denied murdering Nesbitt for his body parts. He had used the black market to buy his daughter her new organs. And he was refused to divulge a name seeing as his daughter was going to need a new pancreas at a later date.

So the agents new that Dale paid for the surgery and they knew who had originally sold the organs to the surgeon but they hadn’t known who the surgeon was until Hodge conducted an experiment back at the lab. The Trout had eaten parts off of Nesbit while he was in the water for what looked like 8 days and Hodge later found a way to make them regurgitate. That got them to hand back over some of Nesbitt’s bones but there were also cells from another dead body found on the bones.

And that’s what made Booth and Bones look at a Mortician. Mortuaries were still kind of a tough subject for Booth yet they eventually found the guy that was performing illegal surgeries. Only he too claimed not to have known about Nesbitt’s murder. As far as he was concerned Nesbitt had been hit by a car.

Though that didn’t really pan out. The angle in which their victim went down wouldn’t have made sense if he had been hit by a car. And yet that’s the story that several people honestly bought into. So the agents had to look outside their group of suspects.

And Bones helped by providing them everything they needed to know. Such as Nesbitt was not killed by a car but someone did use a car bumper that was covered in car polish to beat him to death.

The car polish had been found in a wound and that reminded Booth of when he ran into Nesbitt’s assistant. The same assistant that had created a special jewelry polish that he later tried to repurpose as a car polish when the man he called a mentor hated his first idea. And who patented the polish again as jewelry polish on the same day his boss allegedly went missing.

It was revealed the assistant had once sold his own kidney to fund his boss’s many projects and apparently he wanted support for his own project which Nesbitt never gave him. So they got in an argument and the assistant killed Nesbitt by accident and then sold his organs to the same woman that had bought his kidney.

He figured why should Nesbitt go to waste.

So Booth arrested the assistant for murder and, because he couldn’t find Jared’s ashes for Booth, Aubrey returned Booth’s old office to him. Though Booth did find out where Jared was. It seems he had been delivered to the house and Christine was using the box Jared was in to help her get in and out her little brother’s crib.

And when Booth saw that, all he could say was that he sure loves her brother so he didn’t want to take the box away from her.

But as for Angela’s show, only a handful people came and one of them had to be award winning photo-journalist who liked her work. So Hodge turned out to be right when he said his wife had talent. She did and tonight someone outside of family and friends validated that.