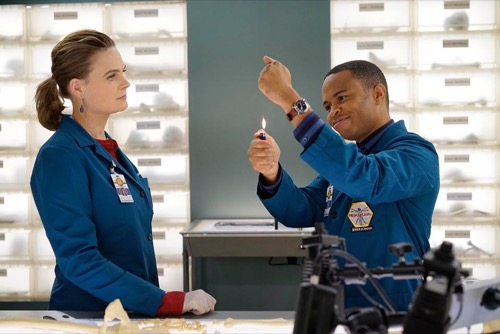 Tonight on FOX Bones airs with an all new Thursday November 12, season 11 episode 7 called, “The Promise in the Palace,” and we have your recap below. On tonight’s episode an escape artist’s body is found in the woods, and it’s revealed that he may have had enemies in the magic community

On the last episode, the body of a U.S. senator was found in a street sweeper by an unusual pair of sanitation workers. Meanwhile, Aubrey pursued a relationship with “squintern” Jessica, but he also secretly dug into her past to make sure there were no skeletons in her closet that could ruin his dreams of a political future. Did you watch the last episode? If you missed it, we have a full and detailed mid-season finale recap right here for you.

On tonight’s episode as per the FOX synopsis, “an escape artist’s body is found in the woods, and it’s revealed that he may have had enemies in the magic community. Meanwhile, Brennan and Booth ask their friends to opine on their tooth-fairy debate; and Angela continues to work on her photography with Sebastian Kohl.”

Tune in at 8PM EST on FOX to watch Season 11 Episode 7 of BONES. We’ll also be updating fans right here as the show airs so be sure to check back in with us. Brennan and Booth have had a long television run. Do you like that their characters mix up business with home life? Hit up the comments and tell us your thoughts about their tangled relationship!

It seems Bones and Booth are always bickering lately. And they were actually in the middle of a discussion about whether or not they should tell their daughter the tooth fairy story exist when they got another case.

The remains of an unidentified woman was found after a bicyclist accidentally drove on her. So not only did the Jeffersonian team had to sort through the injuries to see which ones were in fact caused by the bike, but they also do an internal investigation in order to state the cause of death. And unfortunately their victim had been literally covered in bruises.

Back at the lab, Cam and Edison went ahead with their investigation without Bones and they found out that the victim had suffered several broken arms, injured collar bones, and that she there had been a key lodged in her throat. And so their initial reaction was that someone must have done a number on her.

And once they were able to get a partial fingerprint, Angela identified the victim as Clarissa Mott who was originally from a small town called Silver Spring, Maryland. Although oddly no one had reported her missing. Not even her roommate.

So that’s where Aubrey and Booth decided to start their investigation. They wanted to know why Anna the roommate hadn’t filed a missing person’s report. And Anna’s answer was that she barely knew Clarissa. They had met online when the apartment was advertised and mostly kept to themselves when they began living together.

Though Anna did have some pertinent information. She had known that Clarissa was a professional escape artist. It seems Clarissa had gone by the stage name Clarissa Bilbao and she had worked at a place called the Magic Palace.

Later, Booth and Bones showed up at the palace and they met the owner the infamous Lenny J. Lenny was a magician in his own time but he eventually opened up a theatre/ museum that debuted new talent. And Clarissa was one of his more prominent stars.

According to Lenny, she was on the rise as an Escape Artist. He said it was like she had no bones in her body the way she could escape any lock. So that explained all the bruises that the Jeffersonian had found. Their victim had injured herself quite a few times because of her line of work.

And there were some that were jealous of Clarissa’s talent. Lenny told the guys that she had replaced his last act Big Phil Leeds and Phil ended up having a connection with fire. So the guys wanted to ask him if he was at fault for the 2nd degree burn marks they had found on Clarissa.

Butt, oddly enough Phil admitted to playing a practical “prank” on Clarissa a couple of weeks ago. He said that was how they basically communicated with each other. He would do something and then she would do something. And he said the last time shouldn’t have burned her.

Normally Clarissa would have known how not to get bunt by one of his pranks but the last time she had been distracted. Though he hadn’t known what could distract her.

So Booth and Aubrey checked out who had been sending Clarissa threatening emails and that was nothing. The young man involved was a kid who felt slighted. Apparently Lenny J’s son felt he should have been the next person to do “The Drunken Monkey”. A signature move that his father had come up with yet had given to Clarissa.

Only the kid did see Clarissa kissing some guy and that guy turned out to be Anna the roommate’s boyfriend. So suspicion again fell on Anna but she said she wouldn’t risk her career over doing something that stupid. She and her boyfriend had begun their own catering business and so she wasn’t going to break up their partnership even if she did catch them in the middle of it.

And she never did.

However it wasn’t her boyfriend that had sent Clarissa some flowers. Those flowers had come a Las Vegas Casino that wanted to congratulate Clarissa on taking a job with them. And that’s when everything fell into place for Booth.

Bones had gotten back to him about the murder weapon and she said they had seen for themselves at the Magic Palace. Clarissa it seems had been killed by the lock Lenny J once used for “The Drunken Monkey”. And it would make sense that he would use to kill Clarissa seeing as he gave her her first start and yet she was going to take all his moves to Vegas.

So technically Bones and Booth had pretended to have more evidence than they actually did but it got the job done. And Lenny confessed in the end. Yet after such day, like running after magic tricks, Bones didn’t need any further persuasion. She switched Christine’s tooth with a dollar and was going to tell her daughter that the tooth fairy came in the middle of the night.

And Angela’s friend, that famous photographer that liked her work was back in town to see if Cam would go out with him.

She initially said no but that was because she didn’t want to erase what she had with Arastoo. Though, she was interested in Sebastian.