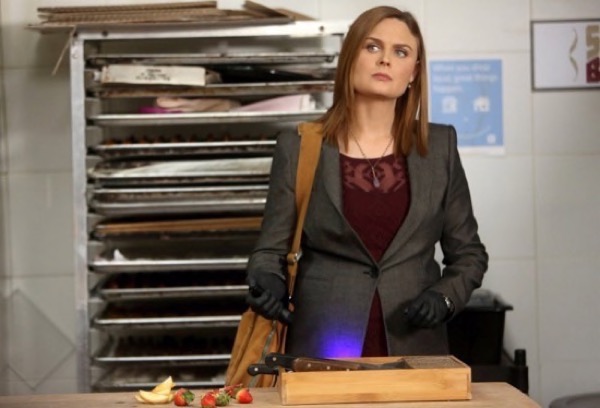 Tonight on FOX Bones returns with an all new Thursday April 9, season 10 episode 13 called, “The Baker in the Bits,” and we have your recap below. On tonight’s episode, the body of an ex-con is found in pieces, and the investigation leads to a local bakery known for hiring former felons, but clues point to a robbery gone awry and a list of suspects from the deceased’s past. Meanwhile, Arastoo mulls returning to Iran to visit his dying brother, which strains his relationship with Cam.

On the last episode, when an affluent school teacher was found dead in an abandoned bookstore, the teachers and students at her school became suspects in the case. Meanwhile, Brennan’s publisher encouraged her to join Twitter to help grow her fan base, and “squintern” Jessica Warren (guest star Laura Spencer) taught Brennan some tricks to master the Twitter-verse, skills Brennan enthusiastically put to use. Did you watch the last episode? If you missed it, we have a full and detailed mid-season finale recap right here for you.

On tonight’s episode as per the FOX synopsis, “when the body of an ex-con is found in pieces, the Jeffersonian team investigates a local bakery known for employing former felons. But they soon learn that the victim was involved in a robbery gone bad, and start targeting suspects from the ex-con’s past. Meanwhile, “squintern” Arastoo Vazirir (guest star Pej Vahdat) must decide whether to return to Iran to visit his dying brother, which causes friction between him and Cam.”

Tune in at 8PM EST on FOX to watch season 10 episode 13 of BONES. We’ll also be updating fans right here as the show airs so be sure to check back in with us. Brennan and Booth have had a long television run. Do you like that their characters mix up business with home life? Hit up the comments and tell us your thoughts about their tangled relationship!

Tonight’s episode of Bones kicks off with a man running through a contruction zone at night covered in blood – someone is chasing him. He jumps a fence and rolls down a hill next to railroad tracks. He laughs that he got away and then a stick of dynamite is thrown down next to him and he is blown up and his body parts scatter everywhere.

The next morning Bones heads to the kitchen and she finds Booth emptying out the garbage can. He explains that he emptied out of his wallet last night and he lost a picture – it meant a lot to him, it was one she sent him while he was in prison. Bones goes through the garbage for him and salvages the picture.

Bones heads to work and she and her team get to work trying to piece together the body parts from the dynamite blast. While Camille and Arastoo are working on the skull at their own table, he explains to her that he was up all night on the phone with his brother in Iran – he has brain cancer. Arastoo plans to risk his life, even though he was exiled, and go back home to see his dying brother. Camille pleads with him not to go – and tells him they will discuss it later.

Angela and Lance find a piece of a tattoo on the remains – they run samples on it and realize it wasn’t done at a tattoo parlor, but in prison. They get a match in the database and they ID the victim as Connor Friedman – he did five years in prison for attempted murder. After further investigating they realize that Connor was cut on his arm before the explosion – perfect incisions around the tattoo. Someone was trying to cut the tattoo off from his arm so that he couldn’t be ID’d before he was killed in the explosion.

Bones and Booth meet up for coffee and discuss their victim Connor. Bones discusses the prison gang that Connor was in, Booth gets upset and says that she is being judgmental of people that go to jail. Meanwhile, Aubrey visits Connor’s apartment and finds his girlfriend Sabrina there. She is devastated when she hears that he was murdered, Sabrina says that she didn’t report him missing because she isn’t want him to get in trouble with his parole officer. According to her, Connor was clean and was working full time at a bakery.

Booth and Bones head to the bakery where Connor worked – they learn that everyone that works there is ex-cons. They meet with the owner of the bakery, Mr. Flender, he explains that his father was an ex-con so he decided to continue his work and give ex-cons a second chance. He insists that Connor was clean – they meet some of his co-workers, Alex and Salt. Alex thinks that they should talk to a man named Pepperton – he was in prison with Connor and he used to show up at the bakery and threaten him.

Back in the lab Cam corners Arastoo and wants to talk about Iran – he tells her there is nothing to discuss, he has already made his decision, Cam is obviously upset. Arastoo changes the subject and briefs her on the progress he has made on Connor’s body, he found ligature marks that prove that someone stabbed Connor in the back before he was blow up by the dynamite.

Jason Pepperton is brought in to the FBI for questioning – he sits down with Booth and Aubrey. He insists that he had no idea that Connor was dead, but he isn’t upset about it because Connor shot his sister and that was why he was in prison. Jason rants that Connor left his sister bleeding on the floor and now she can’t walk. Jason admits that he was following Connor, but he had a camera – he was waiting for him to screw up so that he could get him arrested again for violating his parole.

In the lab Camille confides in Angela – she tells her that the reason she was fighting with Arastoo is because he is going back to Iran to see his brother. Cam says she doesn’t want to talk about it – she just wants to solve the case. Camille analyzed the tissues in Connor’s heart and he was exhausted, he had been running 30 minutes at top speed with high adrenaline. She also found traces of a drug in his system that should have knocked him out like a tranquilizer, but somehow it seemed to have the opposite effect on him. Camille found traces of several other drugs in his system – he had built up such a tolerance, that the tranquilizers had no effect on him. She meets up with Booth and fills him in on Connor’s drug use – apparently he wasn’t as clean as his girlfriend Sabrina said he was.

Aubrey brings in Connor’s girlfriend for questioning, she admits that she lied and Connor was using drugs again. She was fed up because he was blowing through all of their money. Sabrina insists that deep down Connor was a good person and he had a good heart, he didn’t deserve to die. Next Aubrey questions Connor’s co-worker Salt, he admits that he knew Connor was on drugs and everyone at work knew it – except for the owner who chose to be oblivious. Salt confesses that Connor planned to rob a store, it was going to be an inside job, but he told Connor that he wasn’t interested.
Angela pulls Connor’s bank card withdrawals – he was paying for parking meters at the same address everyday. They realize that he was staking out a check cashing place, and his girlfriend Sabrina worked there so she was his “inside man.” Aubrey heads back in to the interrogation room with Sabrina – she scoffs that she never agreed to help him rob the check cashing place. Connor asked her to leave the back door open and she refused. Sabrina says that Connor was working with one of the other guys from work at the bakery – they were planning to rob the store together.

In the lab Arastoo is still putting together Connor’s bones. He left his computer open and she seen that he printed out tickets to Iran. He tells her that he is still going and he believes that there is enough decency in the world to keep him alive while he is in Iran. Camilla tells him she loves him and kisses him – Hodges walks in and interrupts. He says that they found traces of glass in manganese in Connor’s wound from where he fell while he was being chased before he died.
Bones and Booth sit down with the owner of the bakery – they need a name and want to know which one of the employees that Connor was working with. He refuses to give them a name and says that he trusts all of his employees, he tells Booth to arrest him if he wants to, but he isn’t giving up the ex-cons he thinks they are good men.

Angela has reenacted the crime scene based on how long they think Connor ran and the traces of glass they found in his wound, she thinks that Connor was being held captive in an old abandoned building that used to be Coleman Iron Works. Booth and Aubrey rush to the building to investigate – inside they find restraints laying on the floor where Connor escaped. They also find tables covered in blood and an incinerator full of bones. There were three other victims already burnt, and they find the victim’s tattoos hanging on a clothesline drying after they were cut off from their bodies.
The bones and tattoos are rushed to the lab and Brennan and their team get to work – judging from the bodies and their deaths Bones announces that it is “spiritualistic based.” Angela ID’s the body, one is a priest that was reported three months ago, and Tad Whidmer was an ex-con who was in jail with Alex Rockwell – one of the guys who work at the bakery. Angela is still trying to ID the third victim.

Booth and Aubrey head to the bakery to pick up Rockwell, the owner says that Alex didn’t come in to work that day and he has been trying to get a hold of him all day. Bones runs a test on the knife marks on the victims – they were killed by an Afghan knife used in rituals, coincidentally Alex used to be stationed in Afghanistan.

Roger calls Booth and tells him that he found Alex, they are in a parking garage. Booth and Aubrey rush to the parking garage and Alex is attacking the bakery owner. Booth shoots Alex and saves Roger, afterwards they find the murder weapon in Alex’s car – it was the same one used to kill the three men at the factory, Alex was definitely the murderer and the person who chased Connor to the blast zone.