BY Kristine Francis on May 14, 2015 | Comments: one comment
Related : Bones, Recap, Television, TV 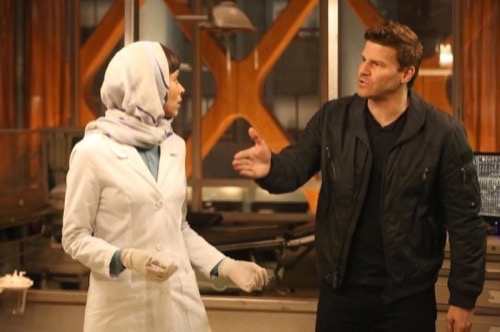 Tonight on FOX Bones returns with an all new Thursday May 14, mid-season finale season 10 episode 19 called, “The Murder in the Middle East,” and we have your recap below. On tonight’s episode Arastoo [Pej Vahdat]  is kidnapped by a member of the Iranian parliament to help him with a murder case, so Booth and Cam head to the Middle East to expose the killer before it’s too late. Meanwhile, Brennan [(Emily Deschanel] is concerned about Booth’s [David Boreanaz]  gambling habit, and asks Aubrey to protect her and Christine from her husband’s bookie.

On the last episode, when the remained of a private high school student are discovered in a ditch, Brennan and Booth surmise that bullying was a factor. When Brennan discovered similarities between her own teen years and the victim’s, it lead the team to question whether or not the girl’s death was, in fact, a murder. Then, with only 48 hours before the execution of serial killer Alex Rockwell, whom Brennan and Booth helped convict, the Jeffersonian team had to race against the clock to confirm Brennan’s new suspicion that Rockwell may not have been responsible for those crimes. Did you watch the last episode? If you missed it, we have a full and detailed mid-season finale recap right here for you.

On tonight’s episode as per the FOX synopsis, “when a powerful member of the Iranian parliament kidnaps Arastoo (guest star Pej Vahdat) to have him aid in a murder case, Booth and Cam head to Iran, and the rest of the Jeffersonian team must race against the clock to help expose the killer. Meanwhile, Brennan learns the truth about Booth’s growing gambling habit, and she turns to Aubrey for help to keep her and Christine safe from her husband’s menacing bookie.”

Tune in at 8PM EST on FOX to watch season 10 episode 19 of BONES. We’ll also be updating fans right here as the show airs so be sure to check back in with us. Brennan and Booth have had a long television run. Do you like that their characters mix up business with home life? Hit up the comments and tell us your thoughts about their tangled relationship!

Arastoo returned to Iran because his brother needed him. Now he wasn’t supposed to go back and there was even danger awaiting him if he went back. Yet with a sick brother, Arastoo felt like he had no other choice. So he boarded a plane, against the advice of his girlfriend, and for a while he was able to help him brother without suffering any consequences.

But that all changed when Iranian parliament member Majid Namazi chose to snatch Arastoo off the streets. Apparently someone had murdered his son Darius and because of that he needed an expert in Forensic Anthropology in order to get justice. And, unfortunately, Arastoo was the only one around.

Arastoo isn’t alone though. He was in fact on the phone with his girlfriend back in the states when he was grabbed. So despite the need for secrecy, Namazi’s secret project was brought to light. And as an acting federal agent, Booth had a few things to say.

Booth and Cam flew out to Iran in order to collect Arastoo but Namazi said he wasn’t going to let the young man go until he had answers. Thus the Americans came to an agreement. They agreed to work the case for Namazi with Arastoo and afterwards all three were allowed to return home. To the States.

However Namazi didn’t just want to know if his son had been murdered. He wanted to know who killed his son. And the idea is that he doesn’t want a name for an official case.

He most likely wants to deal out justice himself.

Hence, the part of the Jeffersonian team that was still back in the states, truly began to worry. Their friends and loved ones were wrapped up in a case that was off the books and anything could happened to them overseas. Yet what had Bones scared the most was that a bookie had showed up at her house, with Booth away, demanding thirty thousand dollars.

It didn’t take her long to realize that her husband had fallen back into bad habits but the bookie had come across as threatening. And so she knew her daughter needed to go somewhere safe. Like staying with Bones’s dad and her grandfather Max for a few days.

Max may have been a former fugitive but he tends to come in handy when there’s random people arriving at Bones door demanding something.

Although when it came time to be open with someone, Bones didn’t choose her dad or Angela. Instead she leaned on Aubrey. Aubrey was the one that said Booth going in undercover was a bad idea. And he was the only one that believed there would be repercussions.

So Bones knew he would understand when she told him he was right. And on his part, he promised he would help Booth with this bookie.

Meanwhile in Iran, Darius was turning out to be not so much of a golden boy. Everything his father believed about him was wrong. Darius drank which is illegal in Iran. And Darius “fornicated” which again was illegal unless he was married.

Thus Darius’s fa5ther ultimately felt like his son didn’t deserve justice. And he came close to ending the case before it could be solved. Because in his eyes, his son had embarrassed him enough.

But Arastoo and his friends convinced him to keep looking. They said his son deserved that much and even if he wasn’t the son his father wanted – that doesn’t make him less. However by continuing with their investigation, the Americans came to the General’s notice.

Meaning if they didn’t solve the case in the next hour and make a run for it – they could all be imprisoned.

Luckily Bones and Angela were able to work fast and determine that the killer was a close friend of the family and Darius’s boss. Apparently Darius had been compiling evidence against him for embezzling and so liberal Iranian was quieted before the authorities could find out what he knew. And it was his boss that told the authorities about the Americans investigating a case on foreign soil.

So this was when Booth’s contacts in the country came in handy.

The friend got Booth and his friends out of harm’s way. And Mr. Namazi was grateful in the end. After he stopped being angry, he realized he still loved his son and was going to mourn him anyway.

Yet Booth found some unwelcome news waiting for him back home. His wife had confronted him about his gambling and when he tried to downplay how in debt he was – she threw him out of the house. She said she couldn’t trust him anymore.

Aubrey may have cleared up Booth’s debt but unless he admits to having a problem then Booth is just going to keep on gambling.