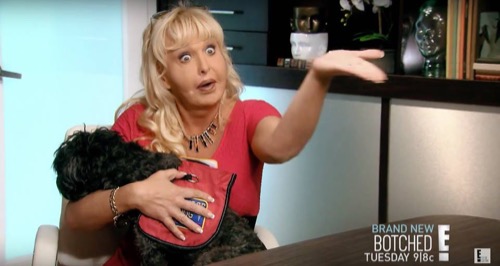 Botched continues tonight with an all new Sunday, October 13 season 2 episode 14 called, “Dr. Nassif Saved My Life,” and we’ve got your recap down below! On tonight’s episode, Paul Nassif saves a woman’s life and then fixes her nose, while Terry repairs a DJ’s oversized chest.

On the last episode in part 1 of 2, Paul followed a hunch when he ordered more tests for a woman with a severely botched nose, which lead to a shocking discovery. Also: The doctors worked in tandem to return two “bunnies” to centerfold shape. Did you watch the episode? If you missed it we have a full and detailed recap, right here for you.

On tonight’s episode as  per the E! synopsis, “Paul saves a woman’s life and then fixes her nose, while Terry repairs a DJ’s oversized chest. Together the doctors meet a woman with anxiety issues and help her find a solution to terrible treatments she had done in Tijuana.”

Tonight is going to be another crazy episode that you won’t want to miss, so be sure to tune in for our live coverage of E!’s “Botched” tonight at 9PM EST! Meanwhile, while you wait for our recap, hit the comments and let us know how excited you are about this show?

Luci is backed tonight. Last week she sat down for a consultation with Paul and Terry and she asked Paul whether or not he could fix her nose. And at the time Paul was optimistic.

He knew that rebuilding Luci’s nose from scratch was going to be one of the toughest things he ever had to do. But on a personal level he felt for Luci and he wanted her to feel in confident about her looks again. Luci as some of us may recall had a nasty motorcycle accident in Italy on vacation which left her face severally damaged.

So Paul said he was going to give her a new nose yet he also wanted to run a few tests beforehand as kind of a precaution. Luci had said she had clear liquid coming out of her nose and the guys feared the liquid could be coming from the brain. And so Paul ordered a scan.

And the scan revealed that she had not one but two brain aneurysms. So Paul recommended a good neurosurgeon to first get the life-threatening aneurysms treated and his parting words to Luci had been to come back once she received her all-clear. And that’s what Luci did.

Her neurosurgeon said she was good for surgery and so Luci went back to Paul and Terry. She wanted to know if she could still get her nose done and Paul believed he could. Yet Terry wanted to warn Luci. He said that there was a chance she could end up with a nose that’s even worse off than one she has. And Luci said that was a risk she was willing to take.

Though, fortunately, Leslie had an easier problem for the guys. It seems she became big-busted overnight so she had to deal with the sagging issue. And when she went to a doctor, he advised her to put in an implant but without a lift.

And Terry said that’s a common mistake. An implant alone couldn’t reduce the sagging. Nevertheless a lift can general get the job done. So he asked Leslie what it is that she wanted. Did she just wanted to remove the sagging or would she prefer to get a reduction as well?

Leslie decided to go with both. She was already big but the implant made her too big. So she told Terry that she wanted to go from a double D to a C. And that she wasn’t going to mind the scarring if she could wear shirts again without left being uncomfortable.

Meanwhile Luci’s surgery had only one minor complication. She had bled a little more than what was expected. But, with the first surgery out of the way, Luci had to gear up for her second surgery because the flap eventually had to be removed.

Paul had given Luci a nasal flap to help rebuild her nose. It helps give the nose structure and allows the nose to get used to its new positon. However it’s not appealing to look at so Luci had a right to be concerned when she first saw it.

But the guys said it was ok and that within three weeks Paul would go back in to remove the flap leaving Luci with a nose.

So Luci was going to have everything wanted while Tuesday didn’t get off so lucky. Tuesday had begun with cosmetic surgery after a divorce. Apparently she needed something to feel good about herself so she thought a touch-up would do the trick. Yet she went down to Tijuana to get her work done.

The doctor was supposed to do a simply face-lift and he ended up injecting her face with silicone amongst other procedures. So Tuesday was left with a face that was in fact sagging and sadly no doctor wanted to touch her. They said they didn’t know what else had been done and didn’t want to take the risk.

And that left Tuesday with one option – a return trip to Tijuana.

She went back to the doctor that had botched the first time and asked him to remove the silicone from her face. And he did get some of it out. But he also messed with two of her mortar nerves and now she can’t move one side of her face like she can with the other.

Though that wasn’t the worst of it. The worst part was that Terry and Paul told her she couldn’t get a surgical fix. They offered other things she could do to regain some healthiness in her face such as noninvasive treatments but they couldn’t fix her with a scalpel. And so Tuesday still received help from the doctors at the end of her consultation.

And Leslie got to wear the bikini top that she wanted after Terry gave her a wonderful new chest.

As for Luci, on the other hand, she got to enjoy her new nose and even invited Dr. Nassif to the party. There he met her whole family and they thanked him for what he did. For he didn’t just give Luci a nose, he also saved her life.