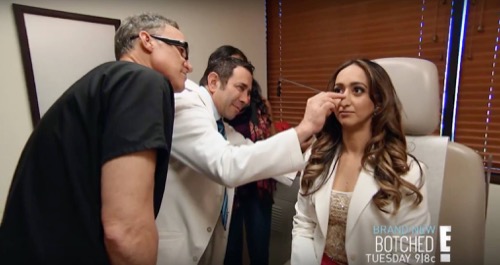 Botched continues tonight with an all new Tuesday, October 20 season 2 episode 15 called, “Boner Free Zone,” and we’ve got your recap down below! On tonight’s episode, Dr. Dubrow transforms a woman’s “boner-free zone.”

On the last episode Paul saved a woman’s life and then fixed her nose, while Terry repaired a DJ’s oversized chest. Together the doctors met a woman with anxiety issues and helped her find a solution to terrible treatments she had done in Tijuana. Did you watch the episode? If you missed it we have a full and detailed recap, right here for you.

On tonight’s episode as  per the E! synopsis “Dr. Dubrow transforms a woman’s “boner-free zone”; at the same time, Dr. Nassif fixes the nose of a patient who had rhinoplasty done by her dentist; and both doctors meet with a mother who had extensive plastic surgery in order to look exactly like her daughter.”

Every now and then the doctors on “Botched” come across an odd one. And on tonight’s episode that’s Janet.

At 56, Janet wants to fix a botched job that was done on her eyes from a surgery a little over ten years ago. Which isn’t unusual. However her first round of surgeries was ordered to make her look like her now 35 year old daughter. And that’s a red flag.

So despite Janet’s real issue, for instance her eyes have become incredibly sensitive since her eye lift, there was a real chance that Terry wouldn’t touch her. Both he and Paul have a policy when it comes to plastic surgery. And neither of them will touch a patient that they feel is an unsecure risk.

That’s why Terry was even hesitant about taking Marla’s case. Marla had gone through three breast augmentations and Terry didn’t know if her body could sustain a Double-D cup. Especially, after she had already had a run-in with staph infections.

Marla you see had grown up flat-chested so her mom had helped her one day to pay for a B cup. But Marla just couldn’t be happy with her new size. Not when she wanted more. So she decided to go up even higher in size and went back to her doctor. Though what she asked for wasn’t bigger, she literally asked for the biggest size they could put in.

And afterwards she was left pleased with the results of her second surgery. She went from small B to a Double-D cup and she would have been happy with remaining at the size. Yet she had a little accident a couple of years down the line.

She had been walking up some wooden stairs and she fell. And the way she fell caused her to get a scar under her breast implant which the doctor later believed to be dangerous. So at the time she was advised to take the implants out.

Then, when she was fully healed, she went back in to get her breast. And that was when she had developed an infection that ultimately led to her breast and nipples collapsing onto itself. So since then Marla has had to go through everyday life without the breast she’s always dreamed of as well as some unpleasant scarring following her infection.

And that’s why Marla wants Terry to put implants back in. But she wants him to go up the Double-D range again and he had to tell that would be nearly impossible. Her skin had tighten over time and though she was fortunate not to have too much tissue scarring – there was only so much left of her original pocket.

So Terry first did a test. He gave her something like an air implant and that’s when he fill her breast pocket with air to see how much CC he could fit in. And the results of that was 375CC when she wanted something more in the range of 500 to 800CC.

Now the 375CC is still a pretty good C cup, well it’s just at the tip of being a C, but Marla had pin a lot of hopes on the way her surgery was going to go. She felt bigger breast would make her feel confident again and even increase her sex drive. So in her mind she had attached bigger breast with her sexuality. And she was disappointed to find out about her new size.

However her husband helped changed her mind. He saw her new chest at her check-up and he had given her thumbs-up. So hopefully he’ll help her adjust to being a C.

But as for Janet, the doctors advised her against more surgery. They said the eye was tricky to begin with but that it still showed good mobility so there was no reason for them to touch it. And once they had gotten that out of the way, both men told her that she was attractive just the way she was. She didn’t have to keep trying to look like her daughter.

The poor woman was embarrassed enough as it is. So the guys really did a Jane a favor by talking to her mother.

And after the doctors were finished with Janet and Jane, Paul helped a young woman named Elmira. Elmira had been at her dentist when he told her he could fix her breathing problem by performing plastic surgery. So she didn’t even doubt him. She went ahead with his plane and he ended up worsening her breathing problems on top of making her nose look like it was botched.

Thus she went to Paul and Paul knew exactly what to do. Even when he had to check something during surgery with her family, he still knew that he was going to do everything possible to fix her nose. And that’s what he did.

He gave her nose that she now breathe from and he made sure that her nose didn’t lose any of her cultural heritage.