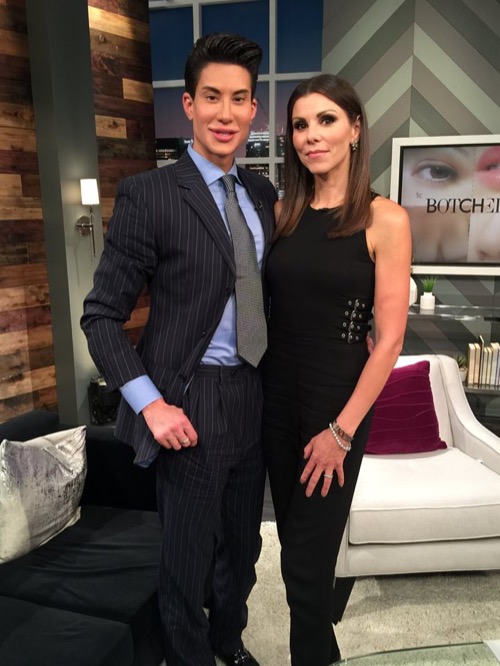 Botched continues tonight with an all new Tuesday, October 27 season 2 episode 16 called, “Breast Greedy,” and we’ve got your recap down below! On tonight’s episode, a woman who had her first nose job at the age of 12 undergoes rhinoplasty.

On the last episode, Dr. Dubrow transformed a woman’s “boner-free zone”; at the same time, Dr. Nassif fixed the nose of a patient who had rhinoplasty done by her dentist; and both doctors met with a mother who had extensive plastic surgery in order to look exactly like her daughter. Did you watch the episode? If you missed it we have a full and detailed recap, right here for you.

On tonight’s episode as  per the E! synopsis “a woman who had her first nose job at the age of 12 undergoes rhinoplasty; at the same time, Dr. Dubrow helps a patient who wants to retire her enormous breasts; and the docs are left speechless by a very unique individual.”

Tonight is going to be another crazy episode that you won’t want to miss, so be sure to tune in for our live coverage of E!’s “Botched” tonight at 9PM EST! Meanwhile, while you wait for our recap, hit the comments and let us know how excited you are about this new season?

Lanique is sixty-six. Though when she was in her thirties, she was convinced to get her first breast implants and it’s safe to say she didn’t like the results from that. So she went in to get another procedure done albeit with a different doctor. And sadly he too ran into some complications.

The second doctor botched her surgery and surprisingly Lanique decided to give that particular doctor a second chance. And then he went on to botch that surgery as well. So Lanique was left with what she calls Frankenstein Breast.

She had a Double Bubble because of scarring and that’s left her a bit self-conscious though that last part is hardly noticeable. Lanique has what you would call a lot of personality. She walked into her consultation ready to crack jokes and for a while she had completely dumbfounded Terry. But he when he saw her chest for himself, he felt for her.

Lanique had been left disfigured by surgery. And Terry said that everything that could go wrong was exactly what happened to Lanique. Therefore her procedure was tough one for Terry.

Though meeting Elle proved to be a delight for Terry and Paul. Elle had gotten her breast implants nearly twenty years ago and it was botched from the start. Her doctor did not did a post-procedure check-up and he had actually told her to remove her own drain tubes.

Which also went for her stitches. It hadn’t been the doctor that removed them. It had been Elle’s boyfriend at the time and luckily he did a pretty good job. But the surgery had left her implants too high on her chest and that in turn made her nipples appears as if they were dragging.

So Terry assessed her and he didn’t see any problems with fixing her implants. Yet he knew he couldn’t give Elle the same size she wanted which was the Pamela Anderson look. He said that it would be too big once it was right positon and that he couldn’t willingly allow her to look comical.

But that was the size Elle wanted and so she was breast greedy. That’s when the woman is told her chest could handle so much but still wants to go bigger.

Elle was not the first person to want that including on the show and she won’t be the last. Though she should serve as a warning. She wanted to go big the first time around and the only doctor that would so such a thing turned out to be incompetent. So it pays to listen to the wiser and more experienced doctors.

But moving on, Lanique’s surgery turned out to be just as quirky as her personality. Terry went in believing that he would be dealing with scarring and what he found was free-floating silicone. And there was just no reason for a doctor to put that in Lanique’s breast.

They didn’t add to her size and truthfully they’re used more in rhinoplasty than in any other surgery. So the doctor had simply put those in for no reason whatsoever. And luckily they hadn’t effected what Terry did.

Terry ended up giving both Lanique and Elle smaller sizes than what they came in with. And he fixed the botched parts left over from their last surgery. Elle’s breast were placed more in alignment so she wasn’t lopsided anymore. Meanwhile Lanique’s breast weren’t so vastly separated anymore from each other and Terry reduced her remaining scarring.

And following surgery, Elle was definitely thinking about sending a picture of her next chest to Paul. She had a crush on him and the flirting during her consultation didn’t seem to faze him. So who knows? Maybe she will try to pursue him.

However there was one other patient that needed help and Paul had to tell her that could fix A,B, and C but he couldn’t give her everything.

Candace had come in to fix her nose. She had a rhinoplasty when she was twelve and, though he gave her a lot, she was left with a bumpy nose that only worsened as she grew older. Which she later found out was pretty common and the number one reason why doctors shouldn’t generally perform plastic on someone so young.

Apparently her nose hadn’t finished growing so that played a part in how it eventually looked. And Paul for one was shocked when she revealed her reasons for why went in for surgery the first time. She said she had been bullied at school and Paul felt that no doctor should have performed surgery based on that excuse alone.

He felt what Candace needed at the time was to be assured she was beautiful and not that she needed fixing. Although he later did his best to fix the mistakes. He removed the stitches the last doctor had left in and he smoothed out her nose.

So now she doesn’t have the bumpiness from before and Candace finally felt beautiful enough to feel comfortable in front of the camera.