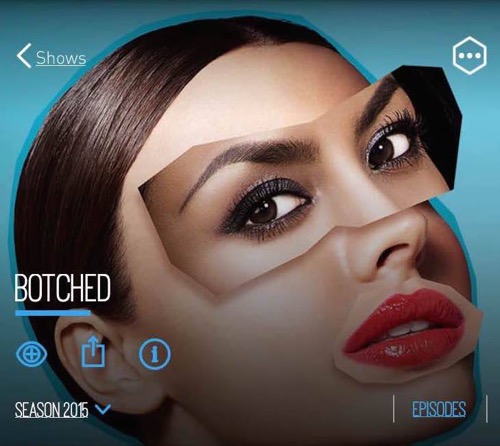 Botched continues tonight with an all new Tuesday, November 24 season 2 finale called, “Stitched Up Sisters,” and we’ve got your recap down below! On tonight’s episode, in the season 2 finale, Dr. Dubrow keeps it all in the family when he performs full-body work on a pair of codependent sisters.

On the last episode Dr. Dubrow operated on a transgender woman’s uniboob; Dr. Nassif fixed a 24-year-old crater on a woman’s nose; and the docs met a potential patient who aspired to be a plastic doll. Did you watch the episode? If you missed it we have a full and detailed recap, right here for you.

On tonight’s episode as  per the E! synopsis “in the Season 2 finale, Dr. Dubrow keeps it all in the family when he performs full-body work on a pair of codependent sisters. Meanwhile, Dr. Nassif operates on a large man with an even larger nose; and the doctors meet a corset-wearing YouTube star.”

Tonight is going to be another crazy episode that you won’t want to miss, so be sure to tune in for our live coverage of E!’s “Botched” tonight at 9PM EST! Meanwhile, while you wait for our recap, hit the comments and let us know how excited you are about this season 2 finale?

#Botched begins with YouTube star Penny who does corset training. There’s a guy with a huge nose and a pair of codependent sisters who do everything together including gastric bypass. Stephanie and Tiffany are first. They lost 300 pounds together. They talk about their family all having weight struggles. They both went to nursing school and they bought a house together and got married at the same time.

Tiffany says her weight got out of control after she had her son. She decided to have gastric and lost 100 pounds so then a year later, Stephanie had gastric too. She talks about all the excess skin hanging on her. Tiffany got a body lift from her gastric doctor but says then she got pregnant, had a c-section and it tore her stomach apart. She says it’s so odd. Stephanie also did surgery and says everything fell.

She says she went through a divorce and was sad and lonely. Tiffany says it was hard on all of them. They still live together with Tiffany’s husband and they’re raising their kids together. Tiffany and Stephanie tell the kids they’re going to have surgery. Stephanie says her body is holding her back from a relationship. Tiffany says this will complete their transformation.

The kids tell them to do what makes them feel beautiful. They want to do it together. Tiffany’s husband Darnell is also supportive. They go for their consultation. They meet Dr Dubrow and Dr Nassif. They tell him about their gastric bypass and weight loss. Dubrow says a pregnancy can mess up plastic surgery then says using a general surgeon for post-weight loss surgery is crazy.

Dubrow says it’s FUPA (fat upper pubic area). Stephanie says her breasts are messed up too and are long. She says there is no intimacy at all. Tiffany says her sister meets guys who like her but if it gets to taking off her clothes, she dumps them. She says her sister will never leave the house because she won’t have sex with them.

They check out the bodies of each of them. Tiffany has breast webbing from excess skin due to weight loss. Now it’s Stephanie’s turn and Dubrow tells her how they can deal with her abdomen. He then checks her breasts and says this is a lot of work to do. He says they can do this. Next is the nose guy. His name is Michael and he has broken his nose three times and has two failed surgeries behind him.

He says in 7th grade he was playing football and the guy’s head struck his nose and his nose was lying on the side of his face and the doctors said they had to wait before they did surgery. He says then as he grew, his nose got bigger and bigger then he couldn’t breathe. He says he went to try and get corrections to breathe. He says the first surgery was crazy and it was swollen and horrible.

He says the doctor told him he has to live with it. His wife Samantha is with him and he says he’s ready to redo the house that his dad built. He says he and his dad were very close and he died of a heart condition that he didn’t tell them about. They inherited the house and his dad’s nose. Michael is worried about his health and an inherited heart condition. He says his granddad died young too.

Samantha says they never really talk about his nose and he says it affects his sleeping and everything he does. He says they’re both active and like to do outdoors stuff and he wants to be the best partner for her. Michael says it’s scary and he’s nervous – almost as much as when they got married. Dubrow tells Nassif he used leeches for a facial.

You put leeches on your stomach and when they’re full of your blood, you put it on your face. Nassif mocks him. Samantha and Michael come in for his consultation. Michael tells them his story about how his nose was injured initially. He says he had a first surgery at 17 and they go check it out. One nostril has no cartilage at all. They call it rhinophyma.

Nassif says they have to reconstruct it and need to add cartilage all over. His wife is scared he won’t survive the surgery and says she knows it’s irrational but that’s how she feels. Next is Penny Brown who is from Australia and says she was always awkward and weird and was bullied and beat up. She does videos on corseting and says she wants more YouTube notoriety.

She says she adores making a living doing fun things. She says corsets are body modification and says it’s an art form. Her husband is in the Air Force and says she was depressed when he got deployed and she put on a corset and took photos for him. She says she fell in love with corsets. She got her first breast surgery at 23. She wanted more surgery and says she told the doctor to go crazy.

She had 2500 CCs and says she had scars. She wants the doctors to fix her scars. Dubrow is ready to do surgery on Tiffany and Stephanie. He says this will be fun. They both cry before they go in. Dubrow says normally you leave family outside but this is a special case. The women agree they’re co-dependent. Once Stephanie is loopy on anesthesia she tells Dubrow he’s handsome and he laughs.

Dubrow talks about the challenge of a breast reduction in saggy large breasts being such a challenge. He’s trying to undo what the other doctors did. Dubrow is done with one sister and moves on to the next. Tiffany kisses her sister and her surgery starts. He starts with her breasts and does a lift and puts in a small pair of implants. He moves on to her tummy and does some lipo.

Now he goes looking for defects and finds a hernia like weakness. He gets done and says both surgeries went well and no more FUPA. Now Penny meets with the doctors. Dubrow says she has the highest breast to waist ratio he’s ever seen. Nassif says he doesn’t like waist training and the complications it can cause. Penny says you have to change your diet and cut out carbonated things and spicy foods.

She says if you obey the rules, you can be okay. Dubrow says it’s okay if you’re conservative. He thinks she’s gone too far and may have organ displacement. He asks what would happen if she let it go for three days what would happen. She says her waist would go back to a 32. She says a corset felt like a hug and Nassif is surprised. She says she’s had two breast surgeries.

She says she scars easily and the anesthetist told her she was going to have big ropy scars and she cried but the surgeon told her it would be okay. Dubrow says large implants can cause scarring. Dubrow wants to see her out of the corset since his wife bought one. Dubrow tells her how they could reduce her areolas but says they have to reduce the implants to reduce the tension.

He says her implants could pop open. Dubrow says they can do it but she says she’ll live with the scars to keep her implants. Dubrow begs her not to let another doctor reduce her areolas without reducing the implants. Dubrow wants to try on her corset and asks her to show him how to wear it. He puts it on Nassif who wants to put one on Dubrow’s neck to shut him up.

Michael’s surgery day is here. Nassif is doing it and Samantha is hoping it goes well. He’s using some rib cartilage to build it up. He digs into it and finds a lot of scar tissue and says he can’t tell where scar ends and cartilage starts. His septum is calcified and there is scar tissue from the original trauma. He says the previous surgery was more deconstructive than constructive.

He finds his septum is torn apart and it fell apart when he went into it. He says this is work he usually doesn’t have to do. He says it was much more difficult than he thought it would be. He says this won’t be a home run cosmetically because of all the damage. Dubrow decided to go see Tiffany and Stephanie at home and finds them resting in bed side by side.

He says they are close so he’s not surprised to find them there. He has a nurse and Stephanie is thrilled with her breasts then she sees her belly button and says it’s so cute. Then they move on to Tiffany and he says her case was harder because of her hernia and breast webbing. He says there are still risks so they need to heal and think positive. He says it went well.

Michael does the big reveal of his new news to his family. He says he’s a whole new person now that he can breathe and be active. He comes out and his mom Margret checks him out. It’s still big but it looks much more normal. He says Nassif gave him the nose he would have had without the accident so that’s great. He’s happy that he can breathe like he was meant to. He says this is so positive.

Now Tiffany and Stephanie are ready for their reveal to friends and family. They do look so much better and they get applause from their loved ones. Stephanie says this is a perfect end to her chapter. Tiffany says she can’t wait to show off her body.