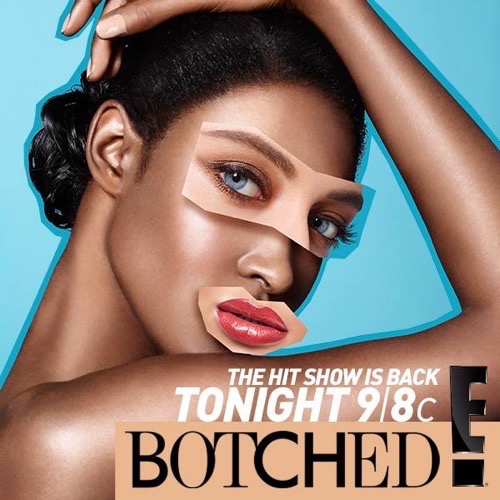 On the last episode in the Season 1 finale, a transgender pop star needed her pixie ears fixed before shooting a music video; and a model went under the knife to correct under-eye bags. Also: Paul provided the finishing touched for a patient born with a birth defect. Did you watch the episode? If you missed it we have a full and detailed recap, right here for you.

On tonight’s episode per say the E! synopsis “Season 2 begins with reality star Tiffany “New York” Pollard asking the doctors to fix her botched boobs. Also: They meet with a transgender woman whose face was filled with cement; and Paul reconstructs a severely burned chin.”

Tonight’s episode of Botched kicks off tonight with a reality TV star we all remember from Flava Flav’s dating show – Tiffany Pollard, AKA New York. She says that she is the “original queen of reality TV.” When she first appeared on Flava Flav, she was flat chested and she hated watching herself. So before she began her new TV show “I Love New York,” she went to a plastic surgeon who said that he could make her breasts are big as she wanted. The breast job was botched, her breasts are too large and lop-sided and uneven.

Rajee is a 47 year old from Florida with a “concrete smile. Rajee was born a man, but desperately wanted to be Cinderella. In Rajee’s mid-twenties he started taking hormone shots and buying women’s clothing. But, that wasn’t enough – he wanted to look more feminine so he went to see a black market doctor that put injections in his face and breasts. For a year he looked great – but then he woke up with huge boils on his face. He was looking in the mirror and the sores on his face started oozing “green liquid like lava.”

Tiffany heads in for her consultation with Dr. Nassif and Dr. Dubrow – she explains that she needs her breasts fixed and she has had three surgeries now. They have her get undressed and measure her chest, her breasts are hanging 11 centimeters lower than they are supposed to be. Dr. Dubrow can’t believe how much work he is going to have to do because the implants are too large, deformed, and her areolas were scarred. Tiffany complains that she wants the Dr. Nassif to look at her nose because “it won’t stop dripping.” He takes a quick look and realizes that the reason she has trouble with her nose is because she has a deviated septum. Dr. Nassif says it won’t be a problem to fix her nose while she is under anesthesia getting her breasts fixed by Dr. Dubrow.

The next patient up tonight is Christina, who has dubbed herself “Mrs. Potato Head.” When she was 10 years old, she and her little brother were playing with matches around kerosene, she was severely burnt and scarred. Since then Christina has had 10 plastic surgeries to reconstruct her face. The doctor that she seen in New York put a chin implant in her face that is way more square than it was supposed to be – so now her chin is a flat line across the bottom of her face.

Christina heads in for her consultation with Dr. Dubrow and Dr. Nassif – she explains that she has had 10 operations to fix her face since she was ten years old. Dr. Dubrow is shocked that it looks like she is wearing a helmet with a chin strap. Christina’s father tags along with her to meet the doctors, he just wants to make sure that she is going to be okay. Dr. Dubrow takes Christina in to the exam room to see how much work it is going to take. He explains that he is going to make incisions on her scars and shave down some of the fat on her chin to make it look more natural.

Rajee heads out to lunch to meet up with her cousin. She waits 20 years for her cousin Tanya to meet up with her – but she is a no show. Rajee feels uncomfortable sitting in the café because she thinks that people are staring at her cheeks. She calls her mom on her cellphone to tell her that she is going to the doctor for a consultation to see if they can fix her face.

Meanwhile, Tiffany heads in for her operation and Dr. Dubrow and Dr. Nassif scrub in while she is put under anesthesia. Dr. Nassif plans to use extra cartilage from under her breasts to rebuild her nose. Once Dr. Nassif gets Tiffany’s chest open he realizes that he can’t use her cartilage from that incision because it is calcified. There are complications and Dr. Dubrow begins freaking out because he realizes that he is not going to have enough time to do her breast surgery too. Tiffany has already bene under anesthesia for too long. When she wakes up they are going to have to break the news to her that they were only able to fix her nose, and she is going to have to have a separate surgery to fix her breasts.

Christina heads in for her surgery, her dad and step-mom are nervous wrecks in the waiting room. Christina goes under anesthesia while Dr. Dubrow and Dr. Nassif scrub in. They plan to divide her chin strap in to three sections, the two sections on the outside they are going to try and make tighter along her jawline to give her a more defined chin. They begin the surgery and have to start off by removing the scar tissue, Dr. Dubrow is a little nervous that they aren’t going to be able to pull it off – but the surgery goes off without a hitch. Dr. Nassif raves that they nailed Christina’s chin.

Rajee heads in for her consultation with the doctors, Dr. Dubrow laughs that she is like a lovable teddy bear when he meets her. Rajee explains that she is a transgender, when she was younger she went to someone’s house for a “pumping party.” She reveals that she had cement injected in to her cheeks in 2003. Rajee heads in to the exam room Dr. Nassif takes a look at her cheeks – Dr. Dubrow is nervous that if they remove one of the lumps in her cheek it could do nerve damage. After looking at her breasts, Dr. Dubrow thinks that their best plan of attack would be to totally remove Rajee’s breasts – she says that is not an option. They convince Rajee that operating on her could cause some serious problems with nerve damage and scar tissue. Rajee breaks down in tears when she realizes that there isn’t anything that they can do for her – but they tell her to call them ASAP if she begins to have any problems with her cheek injections or breasts.

Dr. Nassif and Dr. Dubrow pay Tiffany a visit while she is still on her pain medications and they break the news to her that they didn’t have time to fix her breasts. They explain that her nose took longer than they expected, and they didn’t want ot leave her under anesthesia that long. Dr. Dubrow says that Tiffany will have to wait a few weeks for her nose to heal, and then he will bring her back in for surgery and do her boob job.

Six weeks after her surgery, it is time for Christina to debut her new chin to them. They all gather at the park to wait for Christina to arrive. When Christina arrives her parents and siblings all cheer when they see her new face. Christina breaks down in tears and thanks them for all of the support over the years as she underwent all of her reconstruction surgeries. She gushes that now she can finally move on with her life and put the past in the past. Now it is time for Tiffany’s big debut – she has a party with a couple dozen of her closest friends, everyone cheers and Tiffany squeals “The Next Beyonce Is Back In The Building.” She brags to her friends that now she isn’t a 10, she is more like a 12.