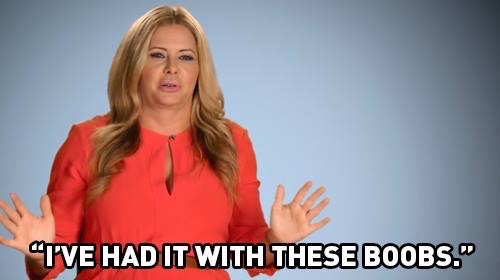 Botched continues with an all new Tuesday April 21, season 2 episode 2 called, “Boob-Watch,” and we have your weekly recap below. On tonight’s episode, Nicole Eggert wants smaller breasts after her last surgeon went too big.

On the last episode, season 2 began with reality star Tiffany “New York” Pollard asking the doctors to fix her botched boobs. Also: they met with a transgender woman whose face was filled with cement; and Paul reconstructed a severely burned chin. Did you watch the episode? If you missed it we have a full and detailed recap, right here for you.

On tonight’s episode per say the E! synopsis “Nicole Eggert wants smaller breasts after her last surgeon went too big; Terry tries to reconstruct a woman who survived a flesh-eating bacteria; and an international flight attendant meets with the doctors.”

A young mother is suffering from a condition commonly known as alien tummy on tonight’s all new episode of “Botched”. Meaning she lost her bellybutton all because of a botched surgery. However, while it would have been bad enough for her to lose that, her doctor ended up compounding the mistake by also leaving two gaping holes in Katina’s stomach.

Eventually the holes covered up though for more than a year she had two gigantic open sores. So now that the area has healed somewhat – she wants to fix her stomach. And this time hopefully get it right.

The last time she went to a plastic surgeon, she went in for a routine tummy tuck. Apparently her pregnancies had caused her to gain a lot of weight and once she noticed that it was effecting her health – she exercised until she was able to lose it all herself. And so she approached her doctor just so that she could get rid of all of the excess skin.

But, unfortunately, she picked up a flesh eating virus not long after her initial surgery and so the second surgery to heal that was what left with the holes. So, now, she’s looking to Terry to help her. And while he’s pretty sure he can do so – he had to warn her about the risks beforehand.

Through no fault of her own, her body had already been through enough and going back might under put added and unnecessary stress in the body. Katina, though, believed the surgery would be worth it. And she wants a stomach and some of her old mobility back.

Her condition now is holding her back from fully interacting with her children.

Next case is Rodrigo and Rodrigo is admittedly obsessed with surgery. He’s had so many procedures done that often people that don’t find him beautiful will tell him he looks like a freak. Yet is that slowing down Rodrigo? No, sir!

He has a Peter Pan complex and doesn’t see anything wrong with that? He believes he’s improving upon perfection!

Last case, on the other hand is Nicole and she doesn’t like her body’s current state. See a few years ago she had her breast done. And she explicitly told her doctor that she didn’t want to go too big. Her exact words were “no bigger than a C” and yet she woke up to a triple D.

So there was some definite miscommunication!

And Nicole didn’t wake up happy. So fast forwards a few years and she took the risk to go and see Terry. And he was able to downgrade her size a little but now she wants to go even further. As in she wants a B cup when her body has adapted to a D.

If she were to get her B then she would look flat-chested and the doctor would have to manipulate her breast tissue into shrinking. And that’s something neither of the doctors think she’ll be happy with in the long run. Thus they’re going to downsize her but not to the level she think she wants.

Meanwhile, there was a few moments during Katina’s surgery when one of our favorite doctors honestly thought he had cut into an organ. Thankfully, however the yellow substance wasn’t a misplaced organ but was in fact “bellybutton cheese”. So Terry ended up finding remnants of Katina’s bellybutton and instead of making an entirely new one – he simply worked with what he had.

Which is what he was going to do for Nicole as well but she did put up a fight in wanting to reduce her breast to the smallest size possible. Plus she also brought up just removing everything. As in cutting it off.

So she was convinced to stick to downsizing and in the end Terry gave her what she really wanted. And the Baywatch alumni looked good. The reduction made her look like she lost weight which made her happy and she figure if she starts working out – she could go back to her former swimsuit days.

And speaking of swimsuits, Katina felt so proud about finally wearing one after so long that she chose to celebrate her new bellybutton/corrected stomach with her husband in the hot tub.

As for Peter Pan, because he too wanted work done, it seems Paul wasn’t able to help him.

He wanted to re-do his nose. But seeing as he had so many rhino procedures done, the bridge of his nose had collapsed and Paul didn’t believe he could go in and mess with a fragile area. And, truthfully, no one was going to be able to give Rodrigo the nose he wanted anyways.

Rodrigo is just one of those guys that would have constantly tried to improve on it until ultimately the nose collapsed in on itself. And then it would have been of no use.