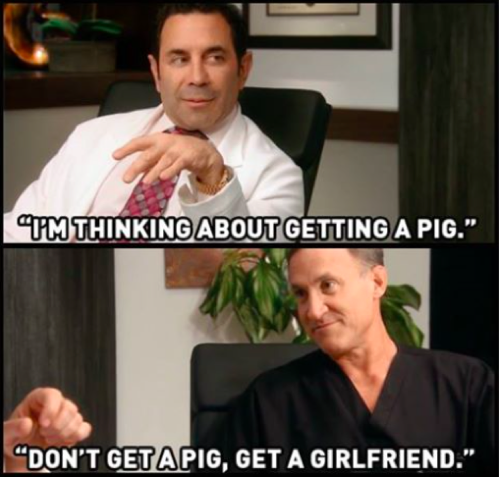 Botched continues tonight with an all new Tuesday, April 28 season 2 episode 3 called, “The Bacon Bra,” and we have your weekly recap below. On tonight’s episode, the docs help a female bodybuilder who wants to appear more feminine.

On the last episode, Nicole Eggert wanted smaller breasts after her last surgeon went too big; Terry tried to reconstruct a woman who survived a flesh-eating bacteria; and an international flight attendant met with the doctors. Did you watch the episode? If you missed it we have a full and detailed recap, right here for you.

On tonight’s episode per say the E! synopsis “the docs help a female bodybuilder who wants to appear more feminine; Paul performs surgery on a woman who is self-conscious about her nostrils; and a patient is obsessed with looking like a blow-up doll.”

Lauren Powers is a professional body builder but after years, and multiple surgeries, she now wants to come across as softer in her appearance. Or in her own words a little more feminine. And so on tonight’s episode of Botched, Terry and Paul have to figure out how to accomplish that on a patient that has been taking growth hormone for years.

But, here’s the thing, neither Terry or Paul believe Lauren is being honest with them when she says she’s only taken the hormones. And so they have to take the risk and perform a surgery on someone that could very well be lying to them.

And speaking of risks, the doctors have a new patient that might be taking her reassignment surgeries too far.

For all intent and purposes, Katella wants to be like a blow-up doll. And though you would automatically think she meant she wanted to be perfect like the sex doll – she actually wants to look as fake and plastic as the doll. So in truth she wants an exaggerated look and she’s hoping the doctors will provide it for her.

However, they’re doctors and not manufacturers. When they work on a patient, they want him or her to look as normal as possible.

Thus when another patient, Barri, comes into their office with a botched nose job – they want help her. Anyone can see that Barri’s original doctor had fixed the tip of her nose and ended up causing a near Miss Piggy event. So Paul wants to go back in to fix his patient’s nostrils so that the fact she had surgery done is not broadcasted.

But Katella, she’s something else. And despite getting her reassignment, she just doesn’t want to be happy as a mere woman. She kind of wants to cause a stir.

And in that respect, she did. Because Paul initially thought she was a joke. He was literally sitting there waiting for Terry to make a big reveal but, unfortunately for him, it never happened. And their patient really did want to be plastic.

So the doctors were worried about her. And they wanted her to seek any kind of help that would make her stop these “plastic enhancements”.

However, they had another problem to deal and that was Katella actually being botched. See, she has a double bubble with her breast implants and frankly the implant in her nose was too big to begin with. So that now runs the risk of it popping through her skin.

Hence the guys knew she needed their help but they still tried talking her out of being a doll.

As for Lauren, her surgery was a success and, you know what, it happened despite her lies in the beginning. For she did use steroids up to two months ago. And she only mentioned that to her doctor in the lead up to her surgery. So, really, she had a lucky escape. Although Barri’s surgery didn’t go as smoothly.

Barri’s nose had started show some discoloration in surgery so Paul ended up having to do some last minute maneuvers. And afterwards, he had to be kept up to date on any changes in case he needed to go back in.

Though, the nose did turn out beautifully. And Barri was happy with the results. So whatever happened in surgery simply must have been a fluke.