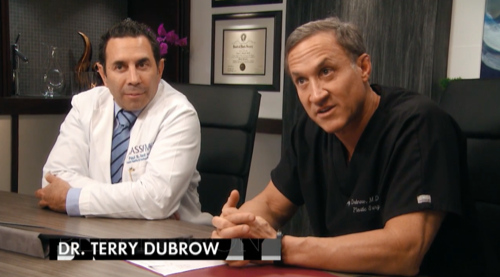 Botched continues with an all new Tuesday May 12, season 2 episode 5 called, “Mo’ Steroids Mo’ Problems.” and we have your weekly recap below. On tonight’s episode, patients include a former model who has breast implants in her butt and a U.K. man who got his lips injected, but is now leaking filler.

On the last episode Dwight Eubanks said goodbye to his nose; a woman had left her with a mysterious bubble. Did you watch the episode? If you missed it we have a full and detailed recap, right here for you.

On tonight’s episode per say the E! synopsis “Patients include a former model who has breast implants in her butt and a U.K. man who got his lips injected, but is now leaking filler. Also: A rapper with a case of “man boobs” receives help from Terry.”

Being a model is actual very competitive work. And unfortunately Jana chose to one up the competition by getting some cosmetic work done.

The first time she went under was for her breast implants. And that was a success. They came out looking natural. However, Jana just didn’t stop there. She also did her butt implants and for some reason she chose to do it down in Mexico.

Plastic surgery is cheaper in Mexico but at the same time it carries more risk. So, please, to all the viewers at home – never go the cheaper route. Quality work comes with a hefty price tag. Plus, hatchet jobs are one of plastic surgeons’ biggest peeves.

When Terry and Paul found out where Jana had gotten her work done, they were so disappointed in her. And admittedly they were then quite intrigued. Because Jana didn’t just get a bad butt job. The doctor in Mexico put breast implants into her butt.

And that’s simply not done!

Now in order to remove the implants, Jana was warned that they might have to remove excess skin. Although that part didn’t faze her. In fact she was kind of glad she was going to be removing a tattoo she now regrets.

Speaking of regrets, though, Mo Thugs rapper Guillermo “Big Caz” Eiland is currently dealing with fall out of his past steroid usage. See steroids can bulk you up but there’s reason why people are warned away. And one of those reasons happens to be boobs. Guillermo took the drug and now he has male breast.

It was embarrassing for him so he did do a surgery but ultimately that only made his chest look worst. So in order for him to be fixed – the doctors told him he was going to need a breast reduction. And that would mean he’d have scars for the rest of his life.

With women, it’s different. They can wear bras and it’s rare they would go topless on beach. Yet Guillermo is already apprehensive about removing his shirt as it is. So scars could give him even more of a reason to feel uncomfortable.

And then there was Jordan. Jordan is from Manchester, London and he came to Terry and Paul because his lips are leaking filler.

See, Jordan does things to the extreme. His lips are huge and his face is so filled with filler that he can’t really move it at times. So the doctors want to help him but they know they can’t perform surgery on him.

Jordan is addicted to surgery. He loves all the attention he receives because of it and so he won’t be stopped. However the guys did at least try to slow him down. Paula and Terry pointed out all the things that could go wrong if he had more work done and that left Jordan with a lot to think about.

So chances are that’ll be enough to keep him from going too far.

And as for Jana, Terry found a lot of fluid had built up over time. Apparently one of the hazards of putting a breast implant into a butt is that eventually the butt tries to resist what it considers forge in. So inside allegedly looked like sea floor.

Yet Terry was able to clean all of that out and remove that implants that luckily hadn’t exploded. There was actually a slim chance that it could have. Partially as breast implant weren’t made to be sit on.

Thus Jana got rid of a regrettable tattoo and she stopped being pancake butt to her friends and family. And it was nice to see her confident again.

Guillermo though chose to celebrate his own successful surgery by wearing a biker’s vest and taking his wife out on a romantic motorcycle ride. So you know who’s going to being going topless at the beach.

And it looks like his wife is going to be enjoying the fruits of that surgery as well.