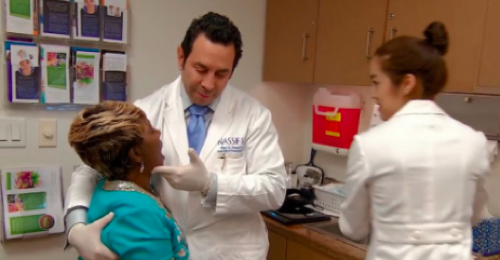 Tonight Botched continues with an all new Tuesday, May 5 season 2 episode 4 called, “Four Leeches and a Funeral,” and we have your weekly recap below. On tonight’s episode, Dwight Eubanks says goodbye to his nose.

On the last episode the docs helped a female bodybuilder who wanted to appear more feminine; Paul performed surgery on a woman who was self-conscious about her nostrils; and a patient was obsessed with looking like a blow-up doll. Did you watch the episode? If you missed it we have a full and detailed recap, right here for you.

On tonight’s episode per say the E! synopsis “Dwight Eubanks says goodbye to his nose; a woman has left her with a mysterious bubble.”

On tonight’s all new episode of “Botched”, we once again see a very familiar face to reality TV. Now everyone knows who Dwight Eubanks is. He’s been on “Married to Medicine”, “The Real Housewives of Atlanta”, and is generally known around town in Atlanta. And as anyone that has ever seen him can tell you, he’s had some work done on his face.

But, unfortunately, it seems his last nose job was botched.

Dwight, as it turns out, had already gotten his slimmer nose. He was born with a nose that he wasn’t comfortable with and so he had it done. However, vanity eventually convinced him that he could go even smaller. And by attempting to go smaller, he’s now unable to breathe through nostrils.

In fact Paul didn’t even need Dwight to tell him about his problem. He saw how small the other man’s nostrils were and was actually able to figure out for himself. So Paul knows how to help his patient but Dwight might not like what he has to do.

Apparently, before he could do anything else, Paul has to widen Dwight’s nostrils again. And so Dwight had to go back to the shape he originally wanted to fix. As for the process, that in itself was painful but it was important that Dwight started breathe normal again.

And speaking of important, there was a woman that came in because she believed her breast implants were a botched job.

Connie had done her breast when she was in her twenties. And at the time, she felt like she was the only small one in her family so she made the decision, against parent advice, to get her breast done. But since then she’s noticed that she’s had a bubble in one of her breast.

The doctors had told her it was fine and later when she began having problems with one of her nipples – they told her the same thing.

Though the bubble is worrisome. Connie’s mother was diagnosed with breast cancer when she was 36 and Connie’s biggest fear is that one day she too will develop the disease. So Terry is going to be doing more than just fixing her breast on tonight’s episode. He also has to check for pre-cancerous cells.

Yet there’s a problem with the implants. On one of the breast, Connie’s skin appears to be tissue thin. And that means Terry has to take special care when he goes in else he might end up costing Connie a nipple.

So with Connie’s surgery, Terry paid special attention to what was happening with that one breast. And removing the older implants didn’t turn out to be a problem. Nor was there any cancerous cells to be found. But Connie was right when she said her breast were botched.

One implant had flipped into the wrong position which explains why she was able to feel it through her breast. And her original doctor had also cut her muscle in half before he gave her the implants. So Terry did have to fix some things while he was in there.

And after Paul had widen Dwight’s nostrils, he was finally able to perform surgery. However he grew concerned when he got in there to take a peek for himself. For it looks like Dwight’s last doctor had barely left him anything work with.

Luckily Paul was still able to reshape a nose and functioning one at that but he later ran into another problem in post-recovery. See, Dwight had brought along his mother to help him during this time. And Queenie got queasy while she was watching Paul removed the bandages and clean up.

So Paul actually came to the rescue and prevented the older woman from passing out. And Dwight, who was in a lot of pain, found a reason to laugh again when he saw his mother “wussing out”.

Though, Dwight’s nose was a success; not everyone that comes into the doctor’s office can get the help they need. And unfortunately that’s what happened with Susan. Susan is known for a big breast. She had 2,000 CC in each of them and she created a name for herself by smashing things with her overly large bust size.

Yet when she went to go see the doctors – it wasn’t about her breasts. Instead she wanted to do something about her stomach.

Susan had gotten liposuction a few years ago and since then her stomach has kind of a hump. But after looking at it, Terry told her they couldn’t help. It seems her liposuction was aggressive back then. Hence her problems now. And Terry warned her that a tummy tuck wouldn’t be able to hold up under the constant weight of her breasts. He said her bust would apply too much pressure to the area and because Susan didn’t want to do a thing about her chest – she had to walk away from doing surgery.

And as for Connie, her nipple once again proved to be an issue in post-op.

There was some discoloration in the tricky nipple so Terry brought out leeches to help. And they were helpful. Despite their reputation, the leeches surprisingly returned Connie’s breast to normal color after a few minutes.

So, afterwards, Connie chose to celebrate her recovery with her husband over an intimate dinner.

Meanwhile, Dwight celebrated his recovery by hosting a funeral for his former nose. He invited friends and family. And then for the finale he took a deep breath through his nose.