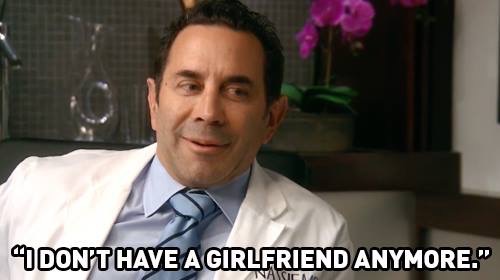 Botched continues with an all new Tuesday, May 19 season 2 episode 6 called, “Dolly’D Up.” On tonight’s episode, a celebrity impersonator wants to fix her saggy skin.

On the last episode patients included a former model who had breast implanted in her butt and a U.K. man who got his lips injected, but was now leaking filler. Also: A rapper with a case of “man boobs” received help from Terry. Did you watch the episode? If you missed it we have a full and detailed recap, right here for you.

On tonight’s episode per say the E! synopsis “a celebrity impersonator wants to fix her saggy skin; Paul helps a woman with a potentially unfixable nose; and a patient requests a convertible implant for both a male and female option.”

Rhonda has a dilemma on tonight’s episode of “Botched”. She appears to have some excess skin left over from her gastric bypass as well as having scars from a botch surgery when she initially attempted to remove said skin. So after some years had passed and she still felt uncomfortable in her skin – she went to Terry and Paul with her husband at her side and she’s asked them to try and fix her.

See, Rhonda started out small. Her high school photos show that she was a little thing. Yet that all changed when she began gaining weight after her first child was born. Apparently she jumped on the bandwagon of let’s eat anything and the weight simply didn’t shrug off as easy as it was putting it on.

And then with two consecutive miscarriages that followed, Rhonda reverted more and more until she got to the point where she was nearly three hundred pounds. So that made her own father worry about her. And after he got sick, he made his daughter promise that if he got healthy then so would she.

Thus she got her bypass and then she took her doctor’s recommendation on who to see for the excess skin. Though instead of a professional in that area, she was given a newbie that was more familiar with other kinds of surgery. So not only will the doctors have to deal with the extra skin she still has but they’ll also have to figure out how to deal with the last doctor’s mistakes.

But as for Margo, she inherited what she wanted to fix.

Margo has quite a large nose and she doesn’t want button on the barely there nose. She just wants something smaller than what she has. For it looks like she’s been dealing with it her whole life and now she’s gotten to the point where she realizes that it keeps dropping down the older she gets.

So she wants to fix it but Paul doesn’t know for sure if he can. He can help yet restructuring a nose is actually a lost harder than it sounds. And she would also be dealing with the excess skin surrounding it. Thus all he could do was promise to do his best.

Though it’s a good thing he underestimated his best. Paul was able to handle the thick skin surround the nose and after a few weeks there was significant improvement in Margo’s appearance. So much so that when she did heal from surgery – she couldn’t wait to show off her new nose.

Before, Margo would do everything she could to stay in the background but now she’s feels more assured. And she believes her new confidence will help her be a better mother to her children.

Then there was Rhonda’s surgery and despite Terry’s skepticism it was just as much a success as Margo’s. Terry had feared he wouldn’t be able to remove enough skin. And with the idea that removing everything was too risky, the good doctor thought he would get about a good two thirds before he was forced to stop in order not to risk his patient.

Although, the previous doctor complete ineptness had luckily come in handy on this one. It seems that guy only covered a half of the areas that he was supposed to have worked on. Hence Terry didn’t have to worry about putting his patient under for too long.

And in the end Terry did help Rhonda, the former Dolly Parton impersonator, pull off a high cut shirt. Which was what she wanted because Rhonda was finally able to celebrate her new figure by burning all of her girdles. Plus as another form of celebration, she gave her husband back the duct tape she would use in order to tape herself into those girdles.

But occasionally the doctors can’t help everyone and tonight they couldn’t help Daniella. Who as it turned out was an unusual case with a very special demand. Technically, Daniella doesn’t generally want to identify as either a man or a woman. Sometimes she wants to be a she and at other time she wants to be a he. Yet there is one little problem with having it both ways and that’s Daniella’s chest.

Daniella once put in breast implants and then because it made her feel like she couldn’t transition back into a man – she eventually had them removed. But because of that surgery, there’s still some scaring around her chest. And her nipples have been wonky ever since.

So Daniella asked the doctors if she could get a chest implant that would help with her nipples but that could also be pushed up into a bra. And sadly technology hasn’t come up with her vision. The guys couldn’t give her what she asked.

Though they did promise to keep in touch in case an implant like Daniella was talking about does eventually come out.