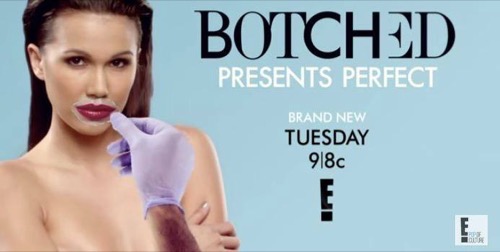 Botched continues tonight with an all new Tuesday, May 26 season 2 episode 7 called, “Perfect,” and we have your weekly recap below. On tonight’s episode, stories of people who are obsessed with looking like the perfect superhero.

On the last episode a celebrity impersonator wanted to fix her saggy skin; Paul helped a woman with a potentially unfixable nose; and a patient requested a convertible implant for both a male and female option. Did you watch the episode? If you missed it we have a full and detailed recap, right here for you.

On tonight’s episode per say the E! synopsis “stories of people who are obsessed with looking like the perfect superhero, living caricature and celebrity are featured.”

Tonight’s episode of Botched features “the perfects”. See the perfects are seen by everyday people as an exaggeration of what a normal person should look like. Meaning they’re the ones that spend upwards of a hundred thousand dollars on plastic surgery which leaves the rest of the world, with people like myself, wondering what could have possibly been so wrong that they just couldn’t stop after the first procedure.

Yet ask any one of these people and they’ll say they’re not unhappy. They’re merely seeking perfection and are willing to do almost anything to do it.

Take Justin. He’s known as “The Perfect Living Doll” and, despite already spending a quarter of a million, he still feels like he can improve upon his “perfection”. Thus he’s gearing up for an upcoming surgery to put in custom implants into his back and while he’s under he also wants to remove veins from his forehead.

The veins aren’t a big deal and as he said himself many celebrities have them. But Justin wants them removed so bad that he went to every doctor he could until eventually one agreed to perform this risky procedure on him.

And with Justin willing to risk blood clots in order to get what he wants, it was no surprise that British expat Krystina has spent about 170,000 dollars just so she can be “The Perfect Caricature”. Apparently the idea to look like a cartoon came to her one day when a local artist decided to make a drawing of her and it inspired her to leave her old tom boy ways behind.

But since then, she’s carried around that photo and has used it as a reference. She’s gotten her boobs done so that they look like two balloons. And recently she’s gotten two giant tattoos of hearts to cover her nipples. Why you may ask? Well, she believes that’s what a caricature would have.

The original artist drew hearts around the picture like a decoration and she merely wanted to carry that aspect over to reality.

So there’s a doll, a cartoon and then there’s Sofie who wants to be “The Perfect Celebrity”. Starting out, Sofie was simply transgender. She transitioned from a classified male to a woman yet, as it turns out, that could be a costly experience. Hence she spent about a hundred thousand dollars in order to match her outsides to her insides.

Although Sofie didn’t just want to be a woman. She also wanted to be a celebrity and for right the reasons. Thus far she created a name for herself by reportedly being the woman that came between Casper Smart and J.Lo so that’s something she wants to change. She wants to be a celebrity much like J.Lo because of her own accomplishments. And that’s why she figured constant “updating” will help keep up her looks.

But the lengths these people go to are too much!

Krystina constantly risks cancer by going to a tanning booth everyday. She says her caricature would always have a tan. And Justin is asking doctors to perform surgeries that have never been done before. So in order to be perfect, are these people willing to die to attain it?

Sofie gets colonics right before she has photo-shoots. She says it helps her lose weight fast and apparently dieting or maintaining an already impressive figure aren’t feasible options. Not at least when you want to become a celebrity.

As for other get quick schemes, Krystina later went to a salon in order to have her lips permanently tattooed in. That way she doesn’t have to spend minutes everyday of her life filling in her lips with ton of lipstick and lip gloss. Plus, even when she’s fifty, her lips will always look like a caricature.

And Krystina did all of this because she wanted to get a second caricature of herself. This time having real life matching what she saw. So it was a good thing that the second picture didn’t disappoint. Otherwise were would she be?

Luckily for Justin, his surgery went well. The doctor, that was somehow convinced to take his case, did remove the veins in Justin’s forehead and now he’s going to laser the scars such a procedure left behind. And as for his back, it looks like it’s swollen but Justin seems to like his look.

And is reconciling himself to it.

So that’s that. Everyone knows he’s not going to stop with procedures and if Krystina believes her caricature needs updating then she’s going to do whatever it takes to match the new image. Thus the only one is probably the least likely to go overboard is Sofie. Thankfully she knows that celebrities have to occasionally look human.