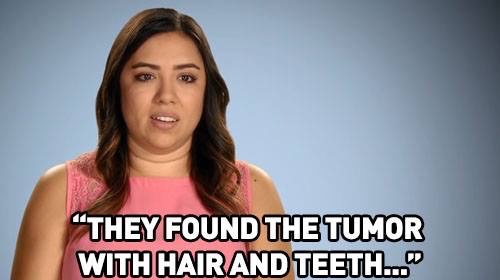 Botched continues with an all new Tuesday, June 7 season 2 episode 8 called, “House of Horrors.” got your recap down below! On tonight’s episode, a patient wants to fix a nose job she received at a “house of horrors” facility.

On the last episode stories of people who are obsessed with looking like the perfect superhero, living caricature and celebrity are featured. Did you watch the episode? If you missed it we have a full and detailed recap, right here for you.

On tonight’s episode per say the E! synopsis “a patient wants to fix a nose job she received at a “house of horrors” facility; a mother asks the doctors to remove a scar that reminds her of her unborn twin; and a woman who calls herself the “human Barbie” shows up seeking eternal youth.”

Sarah Burge is known as the Human Barbie. To date, she’s had over a hundred procedures and currently she’s been trying to get her own seven year old daughter interested in one day having surgery. But if you think this woman will eventually slow down with her own procedures then you must not have heard of her.

On tonight’s all new episode of “Botched”, we got a little insight into Sarah and even though she didn’t start having surgery until there was an actual need – Sarah is now intent on finding eternal youth by any means possible.

See, growing up, Sarah was always a pretty girl and for the most part she traded on her good looks to get ahead in life. She wanted to meet rich men so she got a job at the Playboy Club by lying about her age. Then once she did meet a man that would take care of her – she got bored and left him. And on and on this pattern of hers continued. However, after running into the very worst man she could, she was then beaten within an inch of her life.

Sarah managed to survive the assault but her face was never the same again. So not long after that, Sarah finally started to use something besides her looks. She went back to school and got her nursing degree. And unfortunately that’s when she became interested in plastic surgery.

Initially it was just to fix her face. Yet she soon became addicted. Sarah and her husband Tony are both addicts. And so they don’t see anything wrong with introducing their daughter to their “lifestyle”.

They gotten her gift certificates for future surgery and on their trip to see Paul and Terry – they took the little girl with them!

But, unlike those two, the people that do come in to see Terry and Paul do so because there’s an actual problem. Take Tanya. Tanya had an ovarian tumor and after the doctors went in – they left a scar that continued to worsen as she aged. So now Tanya wants to remove that scar and have a regular stomach like everyone else.

Tanya’s story is a sad one. It seems she suffered from middle child syndrome and then when she heard that her tumor had hair and teeth – she was constantly plagued by “what ifs” as in what if she had her identical twin with her all along. Though Terry and Paul told her that the tumor wasn’t a twin. Because of its location on her ovary, there was no way that tumor could be a twin. Thus Tanya was able to put that to rest but she still needed the surgery to remove the scar.

Apparently, the previous doctors didn’t even think about scarring. So she was left with a lot of internal injuries. Her muscles had separated and there was inner scarring all along her abdomen.

Technically, it was a mess.

Terry, though, was lucky enough to have seen worse so Tanya’s stomach didn’t appear to bother him. He went in with a plan and he was able to follow through without running into any hindrances. But his next patient wasn’t as fortunate.

What happened to Denise was a crime. She had gone to a place that’s now known as the House of Horrors and because of what they did to her there – Paul and Terry actually doubted whether or not they could help. And so it was going to take a miracle to repair the damage.

Back then, Denise had gone in for a simple and yet (with no disrespect) there was a couple of things that seemed off that should have served as a warning.

There wasn’t an anesthesiologist present. Instead she was given a lot of pills with no one there to watch over her while she took them. And before she passed out, she noticed that the operating room was dirty when she knew that such a place had to be kept clean in case of infection.

So, in all honesty, she did get the memo but then she chose to ignore it. And when she did wake up, she found herself tied to the bed and alone.

And that’s why ladies and gentlemen, Denise’s story is textbook for one of the worst things that could happen with plastic surgery. Especially when there’s no background information done on the doctor beforehand. She ignored everything else and then had to spend years living with her mistake.

Hence, when both Terry and Paul went in to go work on her botched nose and breast implants, they found mostly scar tissue. They then did the best they could but Paul could only offer her 85- 90 percent improvement over what she had before. And as it turns out, those numbers ended up doing a world of good.

Denise was happy with the results of her surgery. And she felt more confident in her looks. She now has a straight nose and her breast are on even level. Before she had one pointing up and other down but now they’re not cross-eyed.

And Tanya received the same good news. Her stomach is no longer doubled over and having a flat stomach gave the confidence to wear a cut-out/shear dress. In probably the first time since she had the surgery.

But, oddly, do you know what helped her the most? It was when she was told the “twin” wasn’t a twin. It seemed she had built most of her life around that. And now, without that feeling of loss, she’s stopped pushing her actual sisters away.

So, all in all, the only person who didn’t get what they wanted was Sarah. Sarah wanted a face lift and instead she was warned away. With all the work she’s had done, if she does anymore then she’ll begin to look pinch.

And to be fair to Sarah, she took the news well. Rather than get upset, she simply took out her needles and was prepared to do a touch-up job with Botox herself.