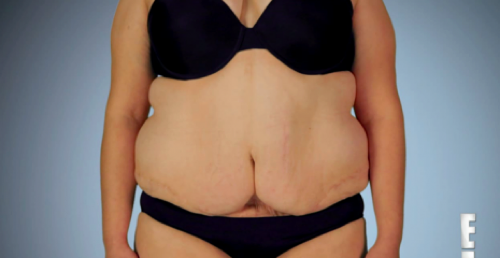 Botched continues with an all new Sunday, July 5 season 2 episode 12 called, “Say Yes to the Breasts.” We’ve got your recap down below! On tonight’s episode, the doctors help a former actress who lost her breasts to a flesh-eating disease; Dr. Dubrow gives hope to a spiritual woman who has a butt on her belly.

On the last episode Dr. Dubrow took on the biggest breast case of his career, while Dr. Nassif tackled a soldier’s botched nose. Also: Both doctors met with a man whose life goal was to look like a superhero. Did you watch the episode? If you missed it we have a full and detailed recap, right here for you.

On tonight’s episode as  per the E! synopsis “the doctors help a former actress who lost her breasts to a flesh-eating disease; Dr. Dubrow gives hope to a spiritual woman who has a butt on her belly; and Dr. Nassif tries to remove a thumbprint left on a man’s nose by another surgeon.”

On tonight’s episode of” Botched” we meet Heather. Heather is suffering from what she calls zombie boobs.

Unfortunately, Heather’s story is a very familiar one. She came out to LA when she was younger in order to pursue actin and, eventually, while she was out there she realized she needed more of an edge on the other girls. So Heather ended up going through her first boob job.

And at first, it was great. The surgery was a success and soon after Heather started to profit from the results. She went on to receive plenty of steady work on sitcoms. Though, thanks to her new figure, she was mostly casted as the drop dead blonde bombshell and usually was asked to wear barely there clothing.

But, you know what, it kept her happy. All she had in way of competition was Pamela Anderson yet she didn’t let that bother her. At least not at that time.

Though, after some years had passed, Heather began to have second thoughts about what she did. Thus she felt like maybe she had instead gone overboard with her chest size. And so there came a point for her where she knew something had to give.

Heather later consulted a doctor and, after he had convinced her of his competence, she decided to go through with the surgery to reduce her chest. However that proved to be her first out of two botched surgeries. Because once it became clear that he had made her breast lopsided, Heather allowed this same doctor to go back in and drill screws into her ribcage.

The doctor had said it was a new procedure but he had also reassured her that it was going to work. And sadly the exact opposite was the result. Heather developed a nasty infection that nearly killed her. Plus, the doctor had left behind massive scarring.

So, in the end, both implants had to be removed and Heather was left with flappy skin rather than actual breast.

But Terry said he could help. He devised of a plan where he was going to go in and inflate Heather’s chest just enough for an implant. And what has Terry feeling more confident about this surgery is that he has a patient who is realistic about surgery.

Heather doesn’t want big breast. She simply wants breast. So Terry, at most, could work with that.

Later, the doctors met Evelyn and she’s suffering from a fanny pack stomach. Meaning her stomach kind of looks like a butt.

Though really she has only herself to blame.

Evelyn had had two kids and was in need of a mommy makeover. Yet this makeover had to be done on a budget. So what Evelyn did was go to Mexico.

Everyone knows that surgery could be done on the cheap in Mexico but there is a reason why good surgical doctors warned their patients away from such places. Because, much like Evelyn, people go down there and they end up scarred.

Not only was she scarred but Evelyn also woke up during surgery. And that meant she wasn’t under actual anesthesia. They probably gave her something less potent to numb her.

So when Terry went in to fix the great mistake, he had to give his patient Liposuction in order to reduce the swelling around the initial cut. And he had to follow that up by tightening her muscles just so she could have that flat stomach she was originally going for.

And as for Heather, Terry realized he could give Heather bigger breast than planned once he cleared up all the scarring.

Thus Heather was given 450 CCs and now has a decent size. To both give her confidence and hopefully pave her way back into the industry. And, really, that’s all thanks to the pieces of cadaver skin Terry had earlier used.

Apparently, doctors can rely on it even if the concept does sound weird.

And it also came in handy during difficult jobs like Jacob’s surgery. After four surgeries, all with the same doctor, Jacob had an Ahi Tuna Nose. It had been worked on so much that it was seemingly close to collapsing.

Paul had to recreate an entire nose for Jacob after he once let another doctor continue to work on him because at the time it was free. And though Paul did use the skin of a corpse, it was hardly recognizable after the surgery. In fact Jacob looked like a whole new person afterwards.

He had a new nose and it made him stand straighter.

And, thankfully, the same went for Evelyn. She did a complete 180 post surgery and her husband will clearly be benefiting from it. For it seems that she had been hiding herself away since they met and now he wants to finally go on a honeymoon with his wife.