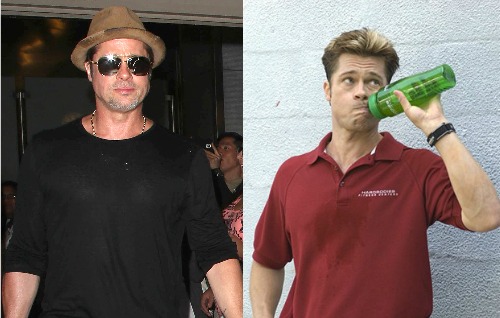 Is Brad Pitt really planning to host on “Saturday Night Live?” The “Fury” actor has been turning down a hosting spot on “SNL” for years. Now it looks like Pitt might have had a change of heart and will be stepping up to give his first ever monologue.

Nobody really knows why Pitt won’t use the NBC powerhouse when promoting his films but there’s no doubt that a Saturday night with Brad would be a huge hit. Some think Brad Pitt just takes himself way too seriously and that doing a sketch show like “Saturday Night Live” is beneath him.

Others have suggested that Brad just isn’t that funny and doesn’t want to be exposed. That can’t be further from the truth though. Remember the episode of “Friends” that Brad Pitt made a cameo in? It was brilliant. Pitt’s role of Chad Feldheimer in “Burn After Reading” was pretty funny too. When he let’s loose, Brad Pitt can be a really funny guy.

There is a claim in the current issue of OK! Magazine that Brad Pitt has finally given in and will be hosting an upcoming episode. There isn’t a date set yet for the Hollywood icon’s visit to Rockefeller Plaza but sources say that Pitt’s appearance on the late night comedy show is coming.

Apparently Brad Pitt’s sons, Maddox and Pax are huge “Saturday Night Live” fans and want to see their dad on the show. Now that Brad has soften on his stance about the appearance, he really can’t back out. If Pitt changed his mind and decided not to be a host of “SNL,” his sons would be devastated.

News that Brad Pitt will be hosting “Saturday Night Live” at some point in the near future has his fans really excited. They can’t wait to see Brad take part in the skits that poke fun of parts of his life. Pitt reportedly is on board for whatever the crew throws at him, whether it be his relationship with Angelina or his brood of six kids. The jokes and skits could be endless as long as Brad Pitt is a willing participant.

There are claims that Brad Pitt is not going to be hosting “Saturday Night Live” and that he never will. However, no one from NBC has commented on Pitt being a host and Brad Pitt’s camp has not made an official statement. So far, Pitt has eluded the popular comedy show but that doesn’t mean he always will. Let’s hope that Brad really did agree to appear because that would be a really great show.