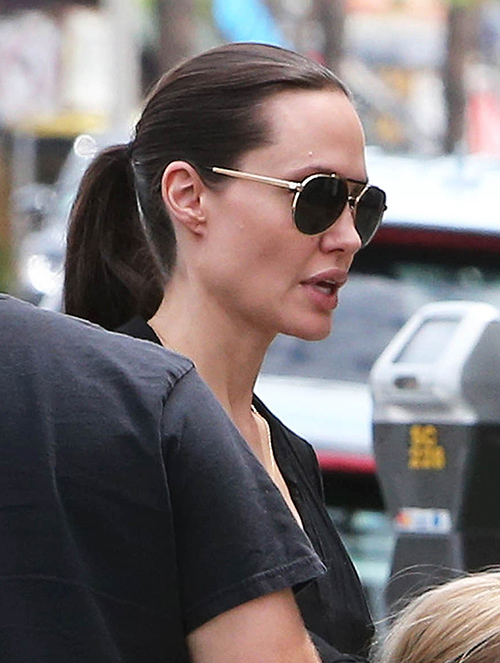 Is it true that Angelina Jolie and Brad Pitt are headed for divorce? Rumors have been circulating about the A-list couple for years now and the most recent stories about Brad and Angelina don’t really sound new.

According to a brand new report from In Touch, Angelina Jolie and Brad Pitt are going through such a rough patch that they’re barely talking at all. As Angie got ready for a recent flight from London to Cambodia, the gossip mag reported that Jolie and Pitt barely even said goodbye together. Their source said that Angie and Brad’s goodbye to each other was anything but lovey dovey.

They went on to say that as Angelina packed up and got ready to head out, it was like both of them were relieved to be apart. So much so that Angie has been throwing herself into her work and has several projects lined up for her production company.

Brad Pitt is also slammed with work. He is currently working on “War Machine” and getting ready to start filing “World War Z 2.” Rumor has it that Pitt is doing anything and everything that he can to not argue with Angelina but it just isn’t working.

It certainly doesn’t help Angelina and Brad that there are some pretty vicious rumors that Brad can’t get his mind off the female lead in a new movie that he is producing. Sienna Miller is looking better than ever on the set of “The Lost City of Z.”

According to an early report, Angelina Jolie is going insane over the possibility that Brad might be interested in Miller. Jolie has forbid her husband from spending time on the movie set even though he is producing it. Angie’s jealousy is so bad that Sienna Miller admitted in a recent interview that she’s only met Brad Pitt twice and he is never on set.

Breakup rumors have plagued Angelina and Brad before they were even married but it looks like the honeymoon was over on their marriage before it even started. Brad and Angie finally got married last year in a very low key ceremony. They spent their honeymoon on the set of “By The Sea” and from the sound of it, there was a lot of tension and arguing between Jolie and Pitt while they were making the film together.

After the most recent argument when Angie was headed to Cambodia, the In Touch source said the fighting wasn’t as passionate as usual. It’s like Brad and Angie have already checked out and don’t even care enough about their relationship to fight anymore.

When Angie got on the plane to go scout locations for her latest project, Brad felt bad about the way things went down. Instead of letting the argument go, Pitt decided to pack up the family and follow Angelina. It really looks like Brad Pitt is the one trying to keep his family together and Angelina might be over it all.

Some have predicted that Brad Pitt and Angelina Jolie won’t last through the end of the year. Our guess is that they will stay married and the divorce rumors will keep raging on. Brad and Angie have already endured 10 years of break up rumors and yet they are still together.