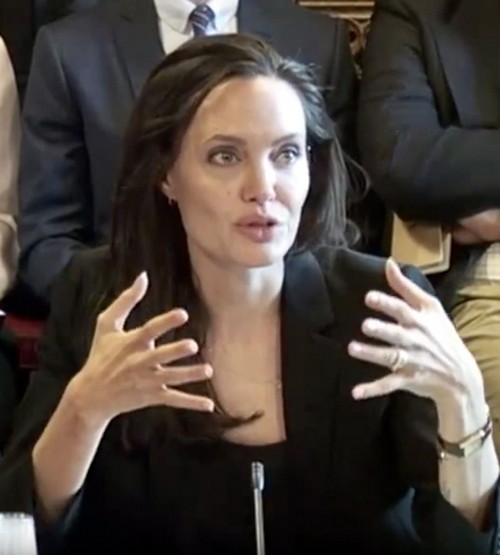 Is Angelina Jolie cheating on Brad Pitt with their kids’ nanny? After Jennifer Garner learned the hard way what happens when you hire super hot nannies to hang out with your kids and hubby, women all over Hollywood began freaking out. But, it turns out if your wife is bisexual, like Angelina Jolie then husbands have just as much to worry about as wives. Is Angelina Jolie the female version of Ben Affleck?

According to an all new report in this week’s edition of GLOBE Magazine, Angelina has gotten VERY close to her kids’ nanny Lena Gould – Angie was recently spotted in London with Lena and the kids, and she was holding hands with her nanny!

GLOBE explains, “The Maleficient star acknowledged she had bonded with Lena in recent months, spending long nights talking and massaging each other’s bodies,” after her husband Brad Pitt demanded to know what was going on between them. Despite the fact that Angelina and Lena are inseparable, Jolie insisted that she and her nanny just shared an “emotional connection,” and reassured Brad he had nothing to worry about.

Should Brad Pitt be worried though? Angelina Jolie is openly bisexual, so it is not out of the realm of possibility for her to hook up with Lena Gould. And, it is no secret that Angie and Brad have been on the verge of a divorce for months – maybe Angelina has turned to Lena to fill a void that Brad no longer fills? Or, for all we know Lena and Angelina’s alleged affair could be the reason that she began pulling away from her husband to begin with.

What do you guys think? Is Angelina really cheating on Brad with their nanny Lena? If you were Brad – how would you react? Let us know what you think in the comments below!