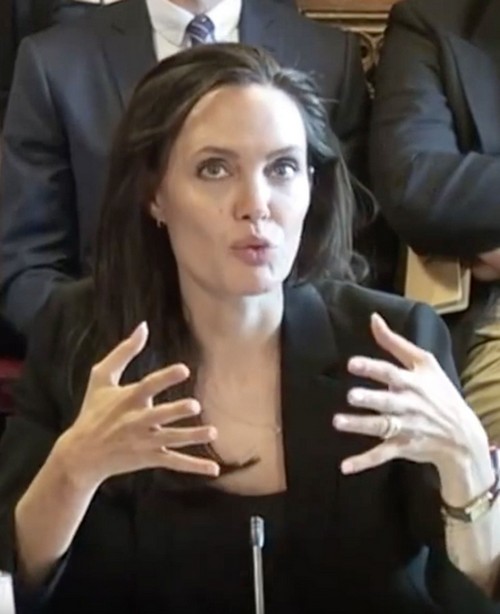 Angelina Jolie may have been the temptress who busted the Hollywood It couple, but Jolie was furious after discovering secret text messages Brad Pitt sent to Jennifer Aniston. Pitt was attempting to console his ex-wife as her marriage to Justin Theroux crumbles.

Rumors claim Angelina was “innocently” using Brad’s phone to send herself some pictures Brad had taken of their children. But, Jolie noticed messages from a “weird number” and investigated, according to Life and Style. As Angie snooped through the messages, she quickly discovered the secret text messages were from Jennifer Aniston.

Seething, Angelina confronted Brad by storming into their bedroom and slamming the door. How the magazine knew the details of what happened behind the closed doors wasn’t revealed, but the report goes on to note that Jolie was so livid, she was talking through clenched-teeth as she confronted him about talking to his ex-wife.

Brad Pitt immediately went on the defense to explain that Jennifer had texted him to let him know about her wedding to Justin Theroux. Jen has publicly stated that she and Brad still talk occasionally, but it’s typically superficial well-wishes. However, Aniston and Pitt’s conversation went deeper than a chat about Jennifer’s wedding. Jennifer Aniston reportedly told Brad Pitt about her plans to adopt a baby girl and then revealed she and Justin were already fighting, almost non-stop. Basically, Jennifer is nervous that her marriage is already crumbling.

Angelina Jolie remained furious, and feels Brad went behind her back to keep in contact with Jennifer. The secrecy worried Jolie, who is “always looking over her shoulder” according to the magazine. The fight didn’t end there. Brad offered to cut off all communication with Aniston, but threw the fact that Jolie still talks with her exes – Jonny Lee Miller and Billy Bob Thornton – back in Angelina’s face. Brad can’t stand the jealousy and hates feeling spied on.

It might be hard to believe Brad Pitt would cut off all communications with Jennifer Aniston. Contradicting reports have claimed that Pitt views Aniston as a dear friend who he is happy to be there for. It’s likely Brad and Angelina have had this fight before, and doesn’t keep Jen in his contact list because of Jolie’s snooping and jealousy issues.

What do you think of Brad Pitt and Jennifer Aniston’s continued friendship? Is Jen trying to manipulate Brad’s affections? Does Angelina Jolie need to worry about her husband’s relationship with his ex? Let us know what you think in the comment section below.

Angelia Jolie gives evidence at the House Of Lords in London, England on September 8, 2015. Angelina spoke about ISIS, who is using rape as a weapon of terror “beyond what we have seen before. It is a violent, brutal terrorizing weapon.” FameFlynet