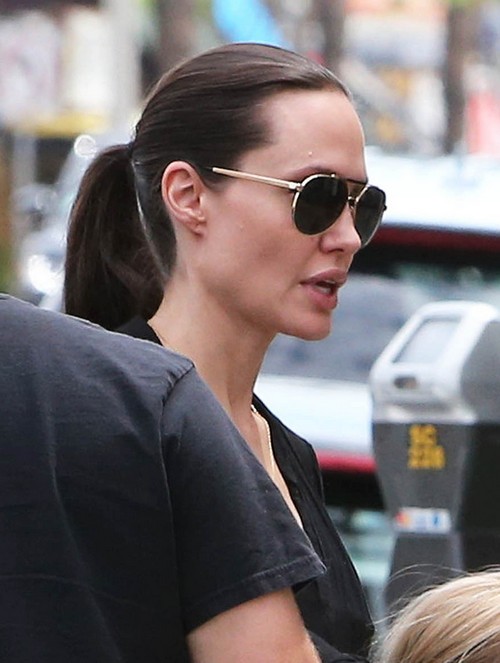 Brad Pitt and Angelina Jolie’s marriage is on the rocks and divorce is looming. Jennifer Aniston has to be laughing her yoga-toned butt off right now. She just said her I do’s with long-time boyfriend Justin Theroux just as news is breaking that her ex Brad and nemesis Jolie might be breaking up. In a recent interview with the Director’s Guild of America about her new movie By the Sea, Jolie herself admits that her marriage with Pitt has some serious cracks and that she’s largely to blame for their troubles.

The movie is about an unhappy couple and Angelina is directing while she and Brad star as the miserable marrieds. During scripted arguments, Angelina says they channelled angst and frustration from real-life arguments in their marriage to make the scenes seem real. As a result, it brought old angers and annoyances that they had gotten past back to the surface and reminded each other of all the things they don’t like about one another.

While Brad Pitt may have ruled the roost when he was married to Jennifer Aniston, we know Angelina Jolie wears the slim slacks in the Jolie-Pitt household. All of that came out when she was directing them and she reportedly humiliated Brad in front of cast and crew with her bossy and demanding ways on set. This then led to Pitt hitting the bottle off set which Angelina didn’t like. She thought he was over-indulging and argued with him about it.

That was too much for Brad to take since he doesn’t think Angelina has any room to talk about vices since she continues to smoke heavily despite her known cancer risks and surgeries to remove her ovaries and breast tissue. He’s been on her to quit for years and doesn’t understand why she would have surgeries to fight her genetic cancer risk but would still continue to smoke – particularly since her mom died of cancer. Angelina’s lighting up is an ongoing source of arguments between the star couple.

Angelina is also hogging all the work time and leaving Brad stuck with their six kids. They had originally promised to alternate projects so that one of them would always be available to the kids, but she has been booking project after project which means Brad can’t take on projects that he wants to do because she commits and he has to take a back seat. Despite admitting to all the on-set arguments Angelina insists that they are better than ever, but says she wouldn’t repeat the experience.

But with six kids and a decade together, it’s not likely that we’re going to see a Brad Pitt-Angelina Jolie split anytime soon. It’s far more likely that the Jennifer Aniston-Justin Theroux union will fall apart first. And wouldn’t that be ironic?