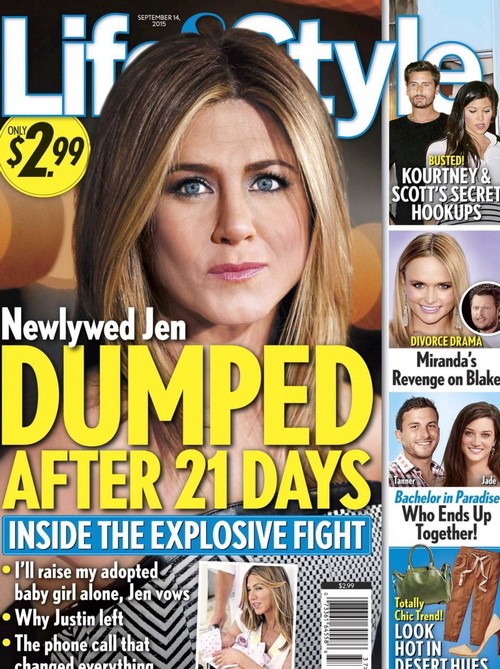 Jennifer Aniston had good cause to look mopey on the red carpet of the August 19 premiere of her new flick She’s Funny That Way. Turns out her new hubby Justin Theroux was nowhere in sight and Jennifer Aniston is worried she’s been dumped just three weeks into their new marriage, according to Life & Style Magazine.

And what’s worse – after years of trying to get knocked up the good old fashioned way with no luck, Jennifer Aniston and Justin Theroux had started the process of adopting a little girl and now it looks like she’ll be a two-time loser at marriage and a single mom to boot. Jennifer is blaming herself for the marriage mess she’s in and she may be right.

Jen is questioning whether she got their marriage off to a rocky start when she invited a pile of pals along on their Bora Bora honeymoon. Turns out they spent what should have been a romantic week in the tropics fighting like cats and dogs in front of famous friends including Jason Bateman, Tobey Maguire. Joel Silver, Jimmy Kimmel and others.

Photos of the newlyweds at the Polynesian Four Seasons resort showed them looking tight-lipped and grim. Now Jennifer Aniston is questioning her decision to wed Justin Theroux at all. Insiders say the duo made and canceled wedding plans numerous plans during their three year engagement then married this time on the spur of the moment once they decided to adopt.

Justin has always made work a priority over his life with Jennifer and she was hoping that pregnancy and marriage would get him to settle down and focus. When she couldn’t get pregnant, she settled for marriage, but it seemed like Justin was ready to take off again right away and now sources say Jennifer is full of regret over saying I do, but still wants the baby.

Jennifer is determined to be a mom and doesn’t mind the idea of doing it alone – she’s seen how well her best pal Courtney Cox has managed as a single mom and is certain she can manage just fine without Justin. Apparently, Justin bailed on the group honeymoon and headed off to work early – back to the set of his HBO show The Leftovers which films in Austin, Texas – far away from his new wife.

Jennifer Aniston then headed solo from Bora Bora to her movie premiere then to Atlanta where she started her new film Mother’s Day (funny). Jen’s upset that they’re newlyweds and trying to start a family while Justin seems intent on keeping distance from her. Justin feels like Jennifer is being clingy and doesn’t respect his work – he’s still building his career while she’s at the peak of hers.

The duo have reportedly been Skype fighting since they went their separate ways after the honeymoon. Only time will tell if they can iron out their differences or if Jennifer Aniston will be a single mom like so many of her famous friends and Justin Theroux will be just another of her famous exes. Doesn’t it seems like Jen has some serious timing issues?

For now, Aniston is reportedly decorating a nursery, focusing on a future baby and hoping for the best with Theroux. Wouldn’t it be a cruel twist of fate if Justin walks off when Jennifer adopting after Brad Pitt walked off to take up with Angelina Jolie just as she was adopting? The irony can’t be lost on Jen.