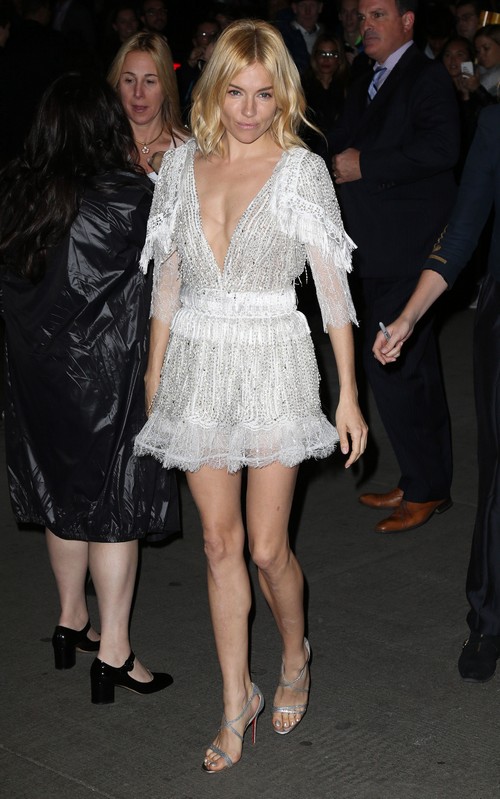 Is Sienna Miller hooking up with Brad Pitt, is Angelina Jolie worried about cheating? The “Lost City of Z” actress has denied allegations of an on set hook up during a radio interview with Sway In The Morning on the Sirius XM station Shade 45. According to multiple reports, Angelina Jolie is “consumed with jealousy” over the possibility that her hubby Brad Pitt might consider cheating with Sienna.

When Sway asked Sienna about rumors that she was getting pretty flirty with Brad Pitt, she responded, “The brilliant thing about that rumour is that yeah I haven’t really read too much about it.” Sienna doesn’t seem to worried that it is her reputation that has other women trying to keep their men away from her.

Celeb Dirty Laundry reported just days ago that Angelina Jolie is scared to death that Brad is going to cheat on her with Sienna. Brad and Angelina have reportedly been fighting over her fear that Brad will step out with Miller and she has every right to be afraid. Sienna is a known cheater, having stepped out on Jude Law when they were together a decade ago.

Then there was Sienna’s romp with Balthazar Getty while he was still married and his wife was pregnant. Getty ended up splitting with his wife Rosetta while he pursued a relationship with Miller. Then the actor turned around and reunited with his wife when the side romance fizzled out.

Sienna has earned herself a reputation as a ‘man-stealer’ in Hollywood, according to many reports, and some of the actors and directors she works with have wives and girlfriends who might worry about their men working with Sienna Miller. Now Angie is worried about Brad Pitt stepping out and with good reason. There have been rumors that Brad and Sienna are very flirty on set.

On top of that, Brad seems to really be smitten with the “American Sniper” actress. Rumor has it that Brad brings up Sienna Miller at least once a day and Angelina Jolie has heard enough.

As far as spending time with Sienna, she claims that Brad Pitt has not visited the movie set even though he is the producer of “Lost City of Z.” Miller went on to throw a little shade at Brad by claiming that she’s only met the actor and producer twice, which is odd considering his role in the making of her movie.

Given that Brad Pitt and Sienna Miller have a history of stepping out on their famous partners, maybe Angelina has every reason to fear for the worst. Brad did begin his relationship with Jolie by cheating on Jennifer Aniston after all. Do you think Pitt might cheat on Angelina with Sienna Miller or should Jolie drop the insecure act? Is this karma for Angelina Jolie who stole a very married Brad Pitt from Jennifer Aniston during the filming of ‘The Smiths?’