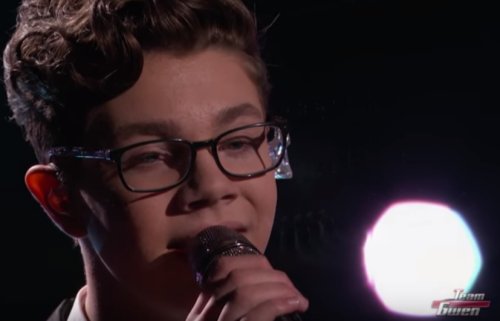 What sent the teen crooner out of the singing show? Likely song choice. Rather than go with a popular song, Braiden chose ancient hymn “Amazing Grace” for his semi-final number. Was this a smart idea? It seems like Coach Gwen Stefani was NOT on board with the song selection.

Unfortunately, in the semi-finals, it’s all down to artist song choice and Braiden seemed insistent that this song was meant for him in this moment. Looks like it was not the wisest move for the high school freshman who has held his own as the youngest on the show up until now.

Will Braiden Sunshine go back to playing in his high school band with his buddies now that he’s been eliminated from The Voice? Or will he follow his singing dreams and try to score a recording contract based on his momentum from the reality singing show?

Braiden has been a solid fan favorite until very recently and his semi-finals “Amazing Grace” landed on the number seven spot on iTunes overnight, behind five other artists from the show. Only Zach Seabaugh, Shelby Brown and Barrett Baber were lower on the iTunes charts.

Those three came in at number 9, 10 and 18 while Braiden was solidly in the top 10 but it was not enough to keep him in the game and Braiden was voted off The Voice. Gwen came into the finals show reveal with Jeffery Austin and Braiden Sunshine.

And now with Braiden gone, is there a chance that the first female coach that could have won The Voice will not? Braiden Sunshine will be missed by fans, but it seems like poor choice of song are to blame for his untimely elimination. Braiden, you’ll be missed!