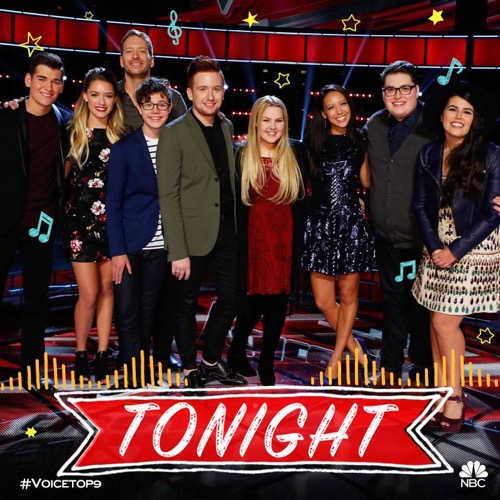 Tonight on NBC the Emmy award winning music competition The Voice continues with an all new Monday December 7, season 9 episode 24 called, “Live Semi-Final Performances,” and we have your weekly recap below. On tonight’s episode the semifinal round opens with the top 9 artists performing.s.

On the last episode, the results were in and there was another elimination; Korin Bukowski  was sent home even though Gwen said she was a  deep human and came out of her shell and deserved to be there. Did you watch the last episode? If you missed it we have you covered with a full and detailed recap right here for you.

Tonight’s season 9 episode 24 is going to be exciting and we’ll be blogging it right here for you. In the meantime hit up the comments section and tell us your thoughts on season 9 of The Voice. We’re now down to the top 9 contestants, who do you think has what it takes to become The Voice?

#TheVoice semi-finals starts now. Barrett Baber is up first and Blake congratulates him on his top five iTunes song. Tonight, he’s doing pop hit Ghost by Ella Henderson. The crowd loves the countrified version of the song and Pharrell says wow. He tells Barrett that shared his emotions in a pure way. (VIDEO HERE)

He calls it a great performance. Gwen says she knows it’s a big dream for him to be there and she’s glad to see him enjoying it. Adam says he knew he would still be here at this point but didn’t know it would be like this. Blake says he saw him kick in the door to the finale and says no one gives more to this.

Team Adam’s Shelby Brown is next. She’s doing Even God Must Get the Blues by Joe Dee Messina. The crowd digs the beautiful number. Comments start with Blake who says she sounded amazing and says it was perfect, wow. Pharrell says he sees confidence and says she connected to the moment well. (VIDEO HERE)

Gwen says she was so calm and it’s her favorite performance of Shelby’s in its understatement. She says it’s warm and she’s a really good singer. Adam says Shelby has driven him crazy and she says it’s mutual. Blake stands to applaud that. Then Adam says she deserves to go to the finale and says he’s beyond proud.

Team Gwen’s Jeffery Austin is next. He’s doing Cher’s Believe. He slows it down and it’s absolutely amazing. Blake says he hopes all three of his artists make it through but says he proved he deserves to be there. Blake says he thinks it could be number one on iTunes and calls it so cool. (VIDEO HERE)

Gwen says he’s so awesome and says he needs to go to the final because he’s ridiculously talented. She says vote for Jefferey right now. She’s gushing, Blake is gushing. The other two judges don’t get a chance to make any remarks.

Ellie Goulding is there and does On My Mind. She kills it as always then it’s back to #TheVoiceTop9. Next up is Team Gwen’s Braiden Sunshine. He’s chosen Amazing Grace. The crowd applauds the hymn and Adam says his journey has been unique and says he’s grown so much with Gwen as a coach. (VIDEO HERE)

Pharrell says at his age, doing what he’s doing inspires a lot of kids and is shining a light for others. Coach Gwen says wow then adds, he was so convinced it was the right song and says it’s spiritual and beautiful and he should stay on the show.

Next up is Zach Seabaugh from Team Blake. He’s singing Miley Cyrus’ The Climb. His soulful performance earns raves from the crowd. Gwen says she wishes she was still in high school to have a locker near him. She says that’s a favorite song of hers and she’s scared he’s going to the finals for sure. (VIDEO HERE)

Adam says he’s proud of all of them and they’ve all improved so much. Adam says it was great. Blake says the song lyrics reflect how cool this has been for him. Blake says that was his best performance of the season.

Next up is Team Pharrell’s last artist Madi Davis. She’s singing Big Girls Don’t Cry by The Four Seasons. The arrangement is almost unrecognizable and cool. Adam says he liked the café set and calls this unexpected. Blake says it was like he was watching a Disney movie and says it was perfect. (VIDEO HERE)

He adds – it was too perfect to be live. He says it will be his three in the finale and her. Pharrell says she was like an actress and it was insane. He says the crazy thing is that she made her dad cry and says America needs to vote Madi through.

Emily takes the stage and by the time she’s done tearing it up, Pharrell and Blake are both on their feet. Gwen says she likes her kooky side and wants to see more of it. Blake says if he owned a record label, he would be calling around trying to get her signed.

He says she’s going to make somebody so much money. Blake says she has to be going to the finale and calls it ridiculous. It was flawless – really everyone has been amazing tonight. The next artist is Team Adam’s Amy Vachal. She’s chosen Bob Dylan’s To Make You Feel My Love. (VIDEO HERE)

Most people haven’t heard Dylan sing it and will know the Garth Brooks or Adele cover. It’s very understated but gorgeous. Pharrell says it was nice and her voice seems to be made of what beautiful clouds are made of. He says it was light, beautiful and with the crazy things in the world, they need this.

Coach Adam says she did what she wanted to do and says the room froze and focused on her. He says they wanted to create a different type of moment and says she’s so refreshingly raw and honest. He says he’’ so proud of her.

The last artist of the night is Team Adam’s Jordan Smith who is singing Queen’s Somebody to Love. He’s got a whole choir just like on the studio original from Queen. Freddie Mercury is big shoes to fill. Jordan kills it and massacres the high notes. (VIDEO HERE)

Adam is on his feet cheering as fireworks spark. All the judges are on their feet cheering along with the crowd. Adam runs to hug him and the crowd won’t stop cheering. Adam drops the mic for him. He says he just had to.

Adam shakes his head and says he doesn’t need to say anything because that’s one of the best things he’s seen in his entire life. Voting is open – use the App or go to NBC.com to vote.