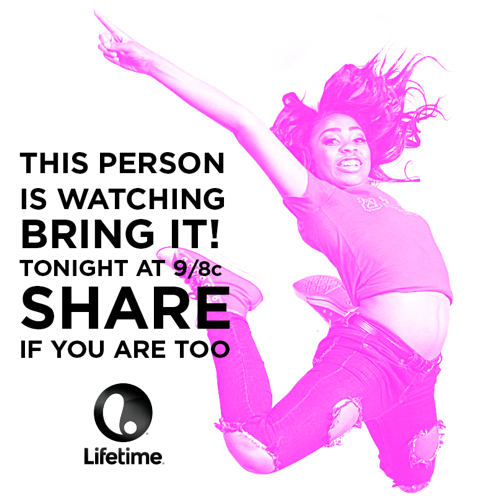 On Lifetime tonight Bring It! airs with an all new Friday January 23, season 2 premiere called “Miami Heat is Back,” and we have your weekly recap below. On tonight’s episode, it’s a brand new competition season and Miss D is determined to whip the Dancing Dolls into an unstoppable dance machine!

“Bring It!,” produced by Pilgrim Studios, shines a spotlight on the elite world of hip-hop majorette competitions. Coach Dianna Williams (aka “Miss D”) and her Dancing Dolls troupe refuse to lose, pushing themselves to the limit each week in the relentless pursuit of victory. Every pump, thrust and high kick on “Bring It!” highlights the triumphs and struggles of intense competition, where errors aren’t tolerated, mediocrity isn’t excused and only a win is acceptable.

On tonight’s episode as per the Lifetime synopsis, “it’s a brand new competition season and Miss D is determined to whip the Dancing Dolls into an unstoppable dance machine! Talented new rival, the YCDT Supastarz of Miami, FL, return to Jackson to prove their victory over the Dolls last season was more than just beginner’s luck and Dianna creates an elaborate routine designed to mock their coach, Tracy. Meanwhile, new Dancing Doll parent, Tawantza, wastes no time before butting heads with Coach D after her daughter, Zatia, gets cut.”

Last competition season, The Dancing Dolls lost a lot more times than Miss D was actually comfortable with. So this upcoming season, the coach is going to put her dancers through the ringer. She has them running up and down steps like Rocky. And that’s because her sole intent this season is beating the Miami Dance team, YCDT Supastarz. The same group that previously and technically had wiped the floor with them.

As for YCDT Supastarz, they are just as focused on winning as The Dancing Dolls. And they even brought in a secret weapon to help them win – guys. No one has ever seen a stance dance with guys so they’re introducing a whole new level to the competition.

Meanwhile, Miss D, has been teaching her dancers new stances to keep up with the Miami team. However a recent Baby Dancing Doll that had graduated to the older class hasn’t turned as well as Diana was hoping. Zatia wasn’t quick enough in learning the new dance steps that she ended up getting cut the moment Diana took out her infamous clipboard.

And though her mother watched her practice from the window – she still took umbrage when her daughter was cut. So much so that she started to bag on the window and that unfortunately caught Diana’s attention.

Miss D came out and to see who was banging on the window and what she found was an irate Tawantza. For Tawantza refuses to see why her daughter Zatia was cut and when she tried to fight with Diana about her the decision – Diana kicked Zatia off the team. Which wasn’t fair to Zatia but even after she was asked to leave – Tawantza still thought her daughter had a future as one of The Dancing Dolls. So a firm kick was what she needed.

Later, though, Diana still had to deal with people getting in her face. Because the team from Miami decided to “drop by” all of sudden and use scare tactics to trip up her team. And, well, Miss D didn’t give Tracey what she was looking for. Rather than fight with her or show how upset she was, the Miami team was kindly asked to leave seeing as they were still practicing.

Yet, Tracy never found out what they were dancing. For it seems Diana created a whole new dance just to make fun of Tracy. So, really, they both have tactics to undermine the other.

But Diana hadn’t gone to someone else studio on the day before competition!

When the competition did roll around, Diana and Tracy ran into each other again. And at the time Diana had told her fellow competitor that it was not personal. Yet both of them had lied.

This competition was as personal as it got. And everyone knew it when the stand battle went down. The two team taunted each other throughout all of their dances and Tracy’s team built a human pyramid that sent around on edge.

The poor girl that had to climb that pyramid had wobbled and even though The Dancing Dolls hadn’t wanted Tracy to win – no one wanted a child to be hurt in the process. Thankfully, the girl hadn’t fallen hard enough to get injured but it was close call and the judges most likely caught it. And will take that into account when they start

As for the dance was purposely targeted towards mocking Tracy, after she kind of had it coming by the way, that was a Grace Jones extravaganza. No really there was a Grace Jones/Tracy dancer that got run over by a baby dancing doll driving a toy car. Diana had included the baby dolls and the little girls brought in a cuteness factor. While the older girls stayed on point with their routine.

And in the end, The Dancing Dolls won the competition but Tracy swore YCDT Supastarz will be back. They had a fall and she said all dancers eventually experience one – that’s not what matters. What should be counted is how they’ll get back up from this setback.