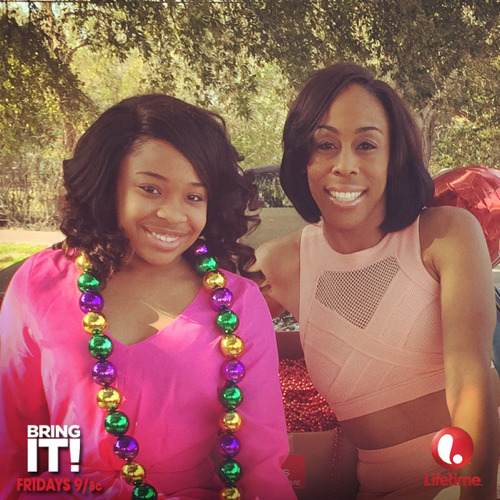 On Lifetime tonight Bring It! airs with an all new Friday February 27, season 2 episode 6 called “No Stopping Kayla,” and we have your weekly recap below. On tonight’s episode, the Dancing Dolls head deep into enemy territory to challenge Mobile, Alabama’s number one dance squad, the Diamondettes, on their own home turf.

On the last episode, Miss D and the girls prepared for a big battle in the Big Easy when a trash-talking old rival reemerges to challenge the Dancing Dolls in New Orleans, Louisiana. Meanwhile, Tina and Rittany rain on Selena’s paraded after her twin daughters, Star and Sky, make cuts for the pom-pom routine.

On tonight’s episode as per the Lifetime synopsis, “The Dancing Dolls head deep into enemy territory to challenge Mobile, Alabama’s number one dance squad, the Diamondettes, on their own home turf. Meanwhile, Miss D confronts Kayla about her recent weight gain as she prepares for a high stakes solo performance and Star, Sky and ZaTia try their best to crush it in their very first Field Show.”

The Dancing Dolls are heading to Mobile, Alabama for the “Shut Up & Dance” competition and on tonight’s all new episode they’ll be facing some strong opposition from the Diamondettes. The Diamondettes, you see, are not only actually from those parts but even Miss. D. has referred to them as fierce. So, while they’re still somewhat new to the game; the Diamondettes have made a name for themselves. And now it’s up the Dancing Dolls to bring it!

For this upcoming competition, Dianna has her girls doing the Captain Solo, the Field Show, and Stands. So she’s asking quite a lot from them this week. Field Show is notoriously tiring and under the best circumstances there have been cases of girls wobbling towards the end.

Hence, endurance is the name of the game. Dianna has to ensure her team can keep up momentum throughout their dance and as she was watching she noticed that her team captain was slower than usual. Kayla it seems has gained some weight and she doesn’t appear to know how to stay fit (not skinny, just fit) even as she does so.

Gaining weight is not a problem. The girls can still dance if they gain here or there. But if they refuse to exercise or do any kind of cardio then they’re allowing the extra pounds to literally weigh them down!

And for someone that used to be the fastest on the floor, Dianna was actually concerned when she saw Kayla forced to catch her breath. So she later pulled her captain to the side for a discussion. Because, ultimately, Dianna wanted Kayla to understand that this was her last year with the team and that a lot was riding on the line.

Sure, she could have made the weight issue about herself or the team but that’s not what the coach did. She simply told her captain “how will you like to be remembered?”

Selena, primarily known as merely Sunjai’s mom, is first and foremost a Dance mom. And so when her younger twins began to express an interest in dancing – Selena knew what her legacy was going to be. Plus, she’s super excited to have all three of her daughters dance on stage for the first time.

Sunjai, Star, and Sky are her darlings! So, in other words, Selena has been getting overexcited and it gotten to be too much for the other mothers. They had to keep telling her to calm down whenever she had a burst of over excessive pride. And, frankly, her bragging was also getting kind of annoying.

And in other mom news, Tawantza even had her crazy moment when she snuck in backstage to have a chat with her Zatia.

Dianna doesn’t generally allow moms to much say in the dressing rooms but Tawantza wanted felt it was her duty to push her daughter into doing great. And she did that by going off on a tangent telling Zatia she has to go out onstage and be Beyoncé. Yet you know what’s funny. Zatia it seems knows her mom can go a little bit overboard (or borderline)and so for the most part she ignores her advice and chooses to listen to her coach instead.

But the competition itself wasn’t as bad as everyone thought it would be. The Field Show was just as tiring as expected and Dianna was nervous when she saw Kayla slowing down on stage. Yet, the Dancing Dolls did manage to complete it and there weren’t any overt mistakes that the judges could pick apart.

And the same goes for the Captain Solo. Kayla brought it when she needed to and by the end of her dance she had left her mom in tears.

So the Dancing Dolls and the Diamondettes were neck and neck all the way to Stands. While the Diamondettes were simple and clean, Dianna felt her girls brought something more to the floor. Her girls were quicker and their steps were more intricate, but all the the same, it was the other team that were the hometown favorites.

And though the Dancing Dolls would go on to win Captain Solo and Stands – they’re not going to be forgetting anytime soon that they lost to the Diamondettes in Field Show!

Dianna has promised her girls will be back because of that!