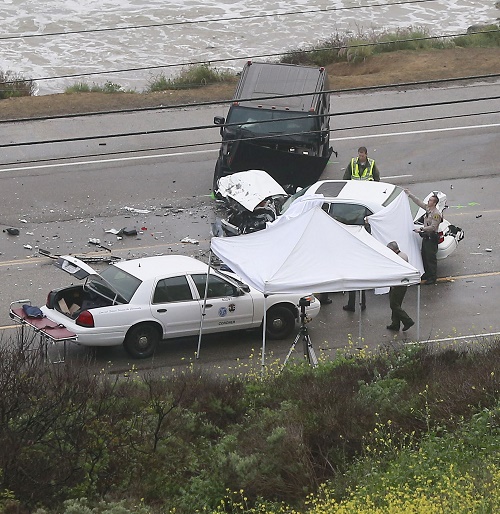 It was reported this weekend that Bruce Jenner was responsible for causing a massive three-car accident on Saturday, leading to several injuries and the tragic death of a woman. The details of what actually happened are still vague, but at the time, it was understood that Bruce was speeding and crashed into the car in front of him, causing that car to drift into the middle of several lanes of traffic. The woman driving that car – a white Lexus – died on impact when a Hummer smashed into her car.

Bruce has already released a statement saying, “My heartfelt and deepest sympathies go out to the family and loved ones, and to all of those who were involved or injured in this terrible accident. It is a devastating tragedy and I cannot pretend to imagine what this family is going through at this time. I am praying for them. I will continue to cooperate in every way possible.”

However, it looks as though the accident might not have been his fault. A TMZ update claims that the police investigation into the crash is ongoing, but apparently, there was another car – a Prius – leading the pack. Apparently, this Prius might have been taking an illegal U-turn, but either way, was the first car to come to a sudden stop. Then, the Lexus slammed into the Prius, which Bruce tried to avoid by swerving. Unfortunately, he could reportedly not stop his car on time, which then led to him crashing into the Lexus and the Lexus drifting into oncoming traffic.

Now, the Prius driver has reportedly been vague in her answers, and this is obviously all hear-say. The police don’t know for sure if the Lexus driver was responsible, but if the incident played out the way the way they assume it did, then there is no criminal liability on Bruce Jenner’s part. Civil liability, possibly, but not criminal liability.

What do you guys think about Bruce Jenner not being responsible for this woman’s death? For all the rumors about his hormones, his texting, and his smoking having caused the speeding – and hence, the accident – it seems like he’s been vindicated now, no? What do you make of all the news surrounding the rumored Bruce Jenner sex change operation, which has supposedly been confirmed by his mother, Esther Jenner?