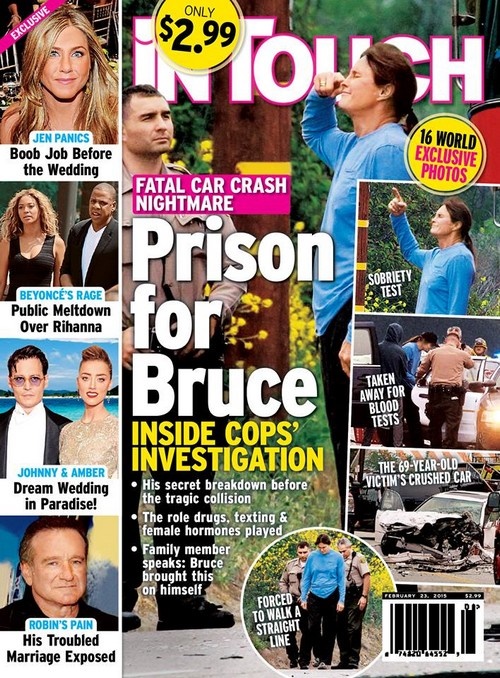 Bruce Jenner was involved in a fatal car crash over the weekend that resulted in the death of a woman, and it’s still unclear exactly how much responsibility Bruce bears for causing the accident. Right now, there are varying and conflicting reports about whether Bruce was texting, whether he was taking drugs, and how much the female hormones that he was taking impaired his driving ability. We do know that he was speeding – or at least, not driving as slow as he should have been – and we know that he did bump into the white car ahead of him, causing it to drive into oncoming traffic and get crushed. However, there are some reports suggesting that another car caused the accident, since it came to a sudden stop before the traffic light, and Bruce actually swerved to avoid it – unintentionally causing the accident.

Regardless of who actually caused the accident, Bruce is obviously taking the brunt of the blame from the media. He did pass a sobriety test, and at the scene of the accident, was forced to prove that he wasn’t drunk or otherwise physically/mentally impaired. However, there is still some concern over all of the other substances he’s taking right now, and what is responsible for his reckless driving. After all, this isn’t just some minor traffic accident – it was a multi-car pileup that led to a death.

In Touch Weekly’s cover touches upon this, among other topics. Apparently, Beyonce also had a massive public meltdown over Rihanna’s rumored affair with Jay-Z, and Jennifer Aniston is reportedly getting a boob job before her wedding to Justin Theroux. Plus, Amber Heard and Johnny Depp finally had their paradise wedding, and they made sure the whole world knew about it.

What do you guys think about Bruce Jenner’s culpability regarding the fatal car crash? Do you think he’s to blame, or was it just a tragic accident caused by many unforeseen circumstances? Let us know your thoughts in the comments below. What do you make of all the news surrounding the Bruce Jenner sex change?