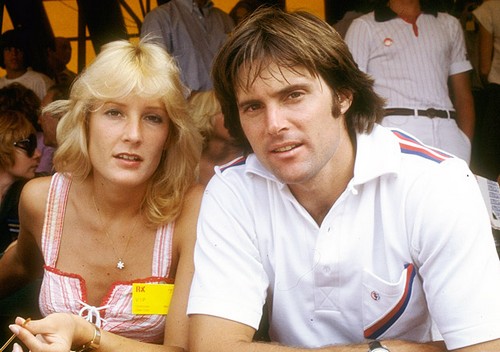 Bruce Jenner’s entire family is coming out of the woodwork right now, including the ex-wives and other children that everybody forgot ever existed. Bruce’s first wife, Chrystie Crownover, is one such family member who’s suddenly come to the forefront of the media after Bruce’s ground-breaking interview about being transgender on Diane Sawyer. Chrystie spoke to Good Morning America on Monday and opened up about her thoughts on Bruce’s transition and his pain during the Diane Sawyer interview.

Chrystie first mentioned that Bruce Jenner sometimes appeared to be in ‘pain’ during the interview, adding, “He was tearful at times and it broke my heart. It broke my heart for him… I think it was cathartic to watch it together. It was pretty intense.”

Maybe it’s the cynic in me, but I’m always wondering whether these women – and by extension, Bruce’s entire family – is genuinely happy for him and for the transgender community, or whether they’re just saying these things to receive positive media coverage. I mean, why give interviews at all, especially to high-profile media organizations? Bruce Jenner said his piece, and if his family wanted to congratulate him, they could always pick up the phone and do so, no? But instead, they’ve made it almost a theater, with interview after interview, soundbite after soundbite, to the extent that it’s all playing out as a massive pre-planned teaser for Bruce’s E! documentary.

At the end of the day, Bruce Jenner was very brave for doing what he did – especially knowing that his life would be scrutinized from top to bottom. But he did it anyway, and he should be commended for it. And while his family should also be commended for sticking by him, Chrystie Crownover and others like her should be careful about what they say in public and what context they say it in – otherwise, they might open themselves to a firestorm of media criticism.