Carrie Ann Inaba and Julianne Hough Fighting to be Number One DWTS Judge: Dancing With The Stars Feud 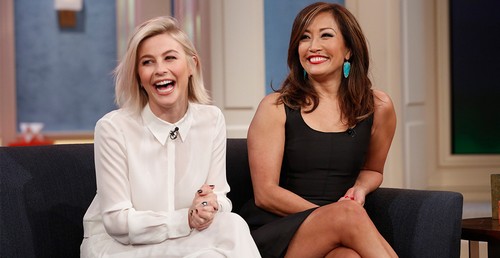 Dancing With The Stars judges Carrie Ann Inaba and Julianne Hough are fighting for ascendancy on the set of the ABC dancing competition. All eyes have been on the competition between the season 21 cast, but according to a new report – there has been quite a bit of competition on the judges’ panel as well.

Carrie Ann has been the only woman on the DWTS judges’ panel since day one, so she wasn’t exactly thrilled when she had to share the spotlight with former pro dancer Hough.

This week’s edition of Life & Style Magazine reveals that the tension between Carrie Ann and Julianne has become unbearable on the set of Dancing With The Stars. A source dished to the magazine, “Each not only tries to dress better than the other, but they try to outdo each other with their outrageous comments. And the pursed lips and eye rolls when the other one speaks are out of control. Julianne may be younger and perkier, but Carrie Ann isn’t letting her rule the roost!”

Julianne Hough has rubbed a lot of people the wrong way since she was appointed to the Dancing With The Stars judges’ panel. Since Len Goodman retired, reports have hinted that Julianne has let her promotion go to her head a bit. But, Carrie Ann and Julianne are both in for a bit of a surprise, because spoilers indicate that ABC is working out a deal with fan favorite Len Goodman to return halfway through Season 21. If Len does come back, then he will return to his role as head judge.

So far Season 21 of Dancing With The Stars has been an eventful one, we are only a few weeks in and tensions are already flying between the judges. Do you think that Julianne Hough and Carrie Ann Inaba’s feud could reach a new level and they could wind up arguing on television? Or will they be able to keep themselves in check? Let us know what you think in the comments below!