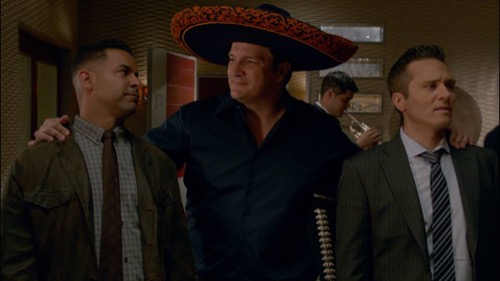 Tonight on ABC Castle starring Nathan Fillion continues with an all new Monday October 12, season 8 episode 4 called “What Lies Beneath” and we have your weekly recap below. On tonight’s episode a hermit-like author idolized by Castle  (Nathan Fillion) is killed, and Castle resolves to solve the murder.

On the last episode, Castle went undercover as a professor after a college fraternity student was killed in a grisly manner. During the investigation, he and Beckett unearth some sinister secrets the university wanted to keep suppressed. Did you watch the last episode? If you missed it, we have a full and detailed recap right here for you.

On tonight’s episode as per ABC’s synopsis, “when Castle’s idol, a famously reclusive author, turns up dead, Castle is determined to solve his hero’s murder. But as he and Beckett dig deeper, they discover that truth is stranger than fiction.”

Tonight’s episode is going to be great so be sure to tune in to CASTLE on ABC at 10PM EST. We’ll be blogging all the action, be sure to hit up the comments and tell us how excited you are for the season 8 episode 4. While you wait for the recap, check out a sneak peek of tonight’s episode below!

Tonight’s episode of Castle kicks off with a man in a church praying. He kneels on his knees and says “Oh Lord give me a sign,” then a gun shot rings out and the stained glass is shattered – he drops dead with a bullet wound in his chest.
Martha pays Kate a visit at the office, she wants to talk about Castle. She tells Kate that Castle was going to try to win her back. Kate doesn’t want to talk about it, she says that she is not getting a divorce. Martha reminds her that Castle is always someone she will be able to trust. She needs to be honest with herself – and then be honest with her husband.

Ryan and Esposito arrive at the crime scene, Ryan is ranting that he is broke because his wife’s second bun in the oven. Esposito has a plan – he thinks that they should take the seargents exam so that they can get raises. They head in to the church and learn that the victim’s name is Dave Johnson, and he was killed between 8:00-11:00 PM. The pastor says that Dave was a devoted parishioner and a family man. He also is one of the best novelists of the past 50 years, he wrote under a pen name, “PJ Moffet.”

Castle is devastated when he hears that his favorite author PJ is dead. Then, he is thrilled when he hears that he died in Kate’s jurisdiction. He thinks that this may be the case that he and Kate could get closer solving together. Castle tracks down Dave’s wife Wendy Johnson, and convinces her to hire him as a PI, he takes her to the police station to meet Kate and give a statement.

Wendy reveals that Dave is rich and owns a ranch in Wyoming, but they were living in Brooklyn and he was working as a janitor because he was doing research for a new book he was writing about the mafia. Wendy says that something happened earlier that morning, and it had PJ really upset, she thinks it had something to with his research in to the mafia.

Ryan and Esposito track down a mobster named Milton Sicero, he had met with PJ that morning, they bring him in for questioning. Milton laughs when they show him a picture of PJ and tell him that he was a famous novelist. He says they must be mistaken, the guy in the photo’s name is Jimmy “Two Guns” O’Malley – and he is an Irish mobster, he is famous for ratting out his entire crew in the 1980’s. Apparently, the mob still has a hit out on Jimmy “Two Guns” and Milton called and tipped them off. Meanwhile, Kate gets a phone call from PJ Moffet’s publisher – apparently Dave Johnson was lying, he is not PJ Moffett, and PJ Moffett is still very much alive.

Ryan and Esposito get a tip on a hit man for the Russian mob named Billy O’Rourke is in town – they head over to his hotel to bring him in and question him. When they arrive, Castle is already there having tea with him. He reveals that Billy came to town to kill Dave, but then he realized that he didn’t look anything like Tommy “Two Guns.” Dave revealed he had been lying about his name for research on his new book. He and Billy wound up hitting it off, he even autographed his book for him. Billy does have some info though, he says that when he dropped Dave/PJ off at his house, a guy was waiting outside for him and threatened him to “come through with what he promised.”

Ryan and Esposito get to work trying to track down the mystery man that was threatening him – his name is Eric Logan, he is a convicted con artist with assault charges. They trace his cell phone number so that they can go pick him up. Meanwhile, Kate is sneaking around behind her team’s back and trying to trace the heroine that was ceased during the Wilkinson case.

Ryan and Esposito head to Eric Logan’s car – instead they find Castle snooping around and they nearly shoot him. They are furious when they realize that Castle has put tracking devices on them – and he has been using his cell phone to track them to every crime scene. While they are arguing, Eric Logan shows up, they follow him in to a support meeting for pathological liars. They realize that Dave wasn’t a con man, he was a pathological liar – and that was why he told people he was an author and in the mafia.

Eric Logan comes in for questioning – he says he wasn’t threatening Dave, he was trying to get him to come to a liars’ meeting because he had fallen off the wagon and he had begun lying again. Eric says that Dave’s lying had gotten him in to a huge mess and he was scared to go to the police – and he didn’t tell Eric what the “huge mess” was.

Later that night, Castle invites Esposito and Ryan over to his house for a party. He is trying to bribe them to let him in on the case so that he can win Kate back. Meanwhile, Esposito sees Ryan’s phone and realizes that he signed up for the seargants exam without him – and there aren’t anywhere slots available to take the test. Esposito is furious and he storms out of the party. Castle overhears them arguing, and says that he can help Ryan out with his money problems – he offers him $500 a week to spy on Kate and give him in for about what is going on at the precinct.

The next morning Kate sends Esposito and Ryan to the city hall – apparently Dave was a janitor there and he had some sort of confrontation with an employee there. Esposito still isn’t speaking to Ryan, but he goes along with him. They learn that Dave had broke in to the accounting office at the mayor’s office – when he got caught, he told them that he was on a “mission from God.” Ryan calls Castle and updates him on what they learned.

Castle heads to the Church and tracks down Dave’s priest – when he confronts him, the blind Priest runs away and starts bumping in to people down the street. Castle loses him, he is certain that he is faking being blind. Ryan and Esposito pick up the priest and bring him in for questioning. He is quite a con man too – he couldn’t pay the church’s dues to the city because he had “mismanaged the money.” So, he sent Dave in to the office to hack in to the computer and change it to say that the church’s dues had been paid. But, Dave discovered that someone at the mayor’s office had stolen $10 Million when he was going through the accounting – and the priest thinks that they killed him to keep it a secret.

Kate knows that there is only one person that could help them – Castle. He is close with the mayor and did research at their office for a book. She video chats with Kate, and he says that their main suspect is comptroller Reed. They decide to set Reed up. They send the priest to warn Reed that there is evidence of the $10 Million slush fund – he tells Reed to come pick up the files at the church in exchange for writing off the church’s debt. Later that night, Esposito, Ryan, and Castle are sitting in the church – waiting to see if Reed shows up. They know that if he shows up, then he is the killer and is trying to get his files to cover his tracks.

They catch Reed with the files, and bring him in to custody – Reed says that he didn’t kill Dave Johnson, he has an alibi, he was playing poker with the police commissioner when Dave was killed. So, they are back to square one. Castle thinks that the worst lie one can tell, is a lie in marriage. They decided to bring Dave’s wife in for questioning again. She cracks and confesses that she killed Dave because he ruined her life – she married him because she thought that he was a millionaire, and PJ Moffett.

After they close the case, Kate informs Ryan and Esposito that she pulled some strings for them and got them both a slot at the sergeants exam – she wishes them luck before they head home. Kate is surprised to see Castle still at the precinct, he surprises her with some celebratory coffee for solving the case. She jokes that no one can make coffee like he does, so she will always need him around.