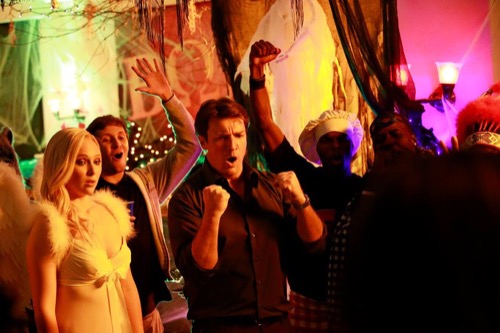 Tonight on ABC Castle starring Nathan Fillion continues with an all new Monday October 5, season 8 episode 3 called “PhDead” and we have your weekly recap below. On tonight’s episode Castle (Nathan Fillion) goes undercover as a professor after a college fraternity student is killed in a grisly manner.

On the last episode, in part two of last week’s Season 8 premiere, Beckett’s side of her abrupt disappearance was revealed. After receiving a mysterious tip from her past, Beckett was launched into a fight for her life, with a team of mercenaries hot on her trail. While Castle investigated why his wife was on the run, Beckett had to figure out who wanted her dead, before they can finish the job. Did you watch the last episode? If you missed it, we have a full and detailed recap right here for you.

On tonight’s episode as per ABC’s synopsis, “Castle goes undercover as a professor after a college fraternity student is killed in a grisly manner. During the investigation, he and Beckett unearth some sinister secrets the university wants to keep suppressed.”

Tonight’s episode of Castle kicks off with a man running through the woods at night in an orange jumpsuit. Someone catches him and spears him to a tree and kills him. Castle jumps out of bed and appears to be dreaming – he realizes he got a package in the mail. It’s a robotic home operating system. He turns it on and it asks him how his day is going. He repies, “Not so good, my wife just left me.” Meanwhile, Kate is training with Vikram. She warns him that she just blew out her marriage to avenge Rachel and the other team. She is worried that Castle will figure out what she is really doing and put a stop to it.

Kate, Ryan, and Espinoza arrive in the woods where the man in the orange jumpsuit has been speared to a tree. They think he escaped from Ryker’s Island – but they can’t find his fingerprints in the system. The time of death is between 1:00 AM and midnight, Lanie takes Kate aside and asks her how she is doing with the break-up. She reassures Kate that Castle loves her. Meanwhile, Castle is on a mission –he is determined to win Kate back. He tells his mother and Alexis that he is going to win Kate back by helping her solve her case of the convict in the park. He topped by the morgue and noticed a devil tattoo on the victim’s shoulder – he just has to trace it and find out what it means.

Meanwhile, Kate and her team is two steps ahead of Castle. The victi is not an inmate, he was wearing a customer. He wasn’t a inmate – he was a college student named Peter Garber and he was majoring in marketing. The tattoo on his shoulder was actually his college’s mascot. Kate heads to the college to meet with the dean – she is shocked when Castle is already in her office and meeting with her. Kate is not happy, she tells Castle she needs to talk to him in private, she knows that he is trying to work her case. Castle insists that he just came to the college to work as a guest professor. Kate snarks that she can’t do this right now and storms off – she tells the dean that Peter Garber was murdered. The dean is baffled, Peter was a model student, she agrees to give Kate her files on him and access to his teachers.

Kate heads outside – Ryan and Espinoza have information. Apparently, Peter was a pledge master, and he turned in his brother Scott Powell for hazing the pledges. Scott’s dad is the district attorney and they know he isn’t going to talk to the police – Ryan and Espinoza decided to go undercover as college students. It doesn’t go well, Scott can tell that they are cops and laughs that they look like they are 40 years old. He doesn’t give them any information. Castle watches Ryan and Espinoza fail miserably at talking to Scott. He says that he has a “secret weapon.” Scott heads to class, and Castle is his teacher – Alexis sits down next to

Scott and introduces herself as a student named Farrah. Scott and Castle get in to an argument and Scott storms out of class – Alexis chases him. They have a chat and she learns that Peter had a secret apartment in student housing.

Alexis, Castle, Ryan, and Espinoza head to the secret apartment – he obviously wasn’t using it for studying. It looks like a sex dungeon, Alexis jokes that Peter was obviously a fan of 50 Shades of Grey. They find a note written on the mirror in red lipstick, it looks like a threat and says, “I say when it is over Peter.” They decide that the best way to find out what Peter was up to in his secret apartment is to talk to Peter’s frat brothers.
Alexis heads to a frat party that night undercover, and Castle, Ryan, and Espinoza are waiting outside in the van. Ryan says that it is very brave of Castle to send his daughter in to a frat house full of drunken college guys, dressed as a slutty angel. Castle freaks out and goes in to the party, he challenges the guys to a round of peer pong. While he is playing, he learns that Peter was dating a professor named Dr. Lillstrom. Kate arrives at the party and she is not happy that Castle is there – she tells him to go home because he is drunk. After Castle leaves, Kate receives an emergency phone call from Vikram – he found the guys she was looking for.
Kate rushes to the park to meet up with the guy, she needs his help. He helped her get cleared for a murder before. He pleads with Kate to “let it go” and says he has a good life now and a woman that loves him. Kate refuses to let it go. He gives Kate a tip, he tells her that the drug trade didn’t end with Wilkinson’s death – she needs to find a fingerprint and pick up the trail.

In the morning Castle is hung over, his mom warns him that he is getting too old to party like that. Alexis found Peter’s girlfriend – Dr. Lillstrom is the head of the psych department, and she has been out of work all week. Alexis tracked her cell phone, it last pinged at an abandoned warehouse four blocks away from where Peter was killed. Castle and Alexis head to the abandoned warehouse to check it out. They hear a man screaing inside – they find what appears to be a makeshift prison. There are prison cells, men in jumpsuits, and women walking around dressed as police officers. Two men catch them, ID them, and throw them in one of the jail cells.

Alexis is freaking out, she demands to know what kind of a prison it is. Castle thinks that they are all university students doing a reenactment of the Stamford Prison experiment. Peter was obviously part of the experiment, but he escaped. A girl in the cell next to them hears them talking about Peter, she says that one day she woke up and Peter was gone – but they thought that the guards were probably messing with their heads. The girls cry that she wants to go home, but there is no panic button. Peter was the head warden, but she was too nice to the inmates – so he got demoted to prisoner. Lillstrom is the warden, she tortures them every day and flashes lights in their eyes and tries to learn their deepest and darkest secrets.

Castle makes the guard take him to Dr. Lillstrom, he arrests her and marches her to the police station. Kate is confused, Castle insists that it was just a citizen’s arrest. He tries to tell her about the underground prison. Castle takes Ryan and Espinoza back to the underground prison but all of the guards are gone – the office has been completely cleared out. Dr. Lillstrom must have had a contingency plan. Castle is devastated that he was so busy trying to impress Kate, that he left the evidence and now it is all gone.

Kate is questioning Dr. Lillstrom – she insists that she wasn’t sleeping with Peter and she didn’t kill him. She has an alibi, she was at her apartment and a pipe burst – the doorman can place her at home. Lillstrom agrees to cooperate, she says that knows who he was sleeping with – it’s actually Dean Fellers. She confirms they were having an affair, she says that Peter kept standing her up. The night he was killed, he called her freaking out and asked her to meet him at the park. Dean Fellers says that Peter never showed up though.

Castle doesn’t think Dean Fellers is the killer though, he convinces Kate to go back to where Peter started the night he was murdered – in the prison cell. They head to the prison and Castle locks them inside of Peter’s cell. While they are locked in the cell, they notice an air vent – Castle gives Kate a boost and she lifts herself in to the ceiling. She crawls through the vent and gets out and lets Castle free. They realize that there is no way that Peter could have escaped by himself – the girl Emily that Castle met in the prison must have helped him.

They bring Emily in for questioning, she cracks and admits that she escaped with Peter – but she wasn’t herself, she stabbed him with the tree branch because the prison had messed with her mind. Then, she ran back to the prison and got back in her cell – she thought it was the perfect alibi.

Castle heads home after the case is closed, and has a drink of Scotch with Alexis. He tells her that when he was at the prison, he and Kate had a “moment.” He thinks that his plan is working. Castle decides that they are going to stars a tradition – every time they solve a case together they are goig to drink Scotch together and blow bubbles out of fake cigars.