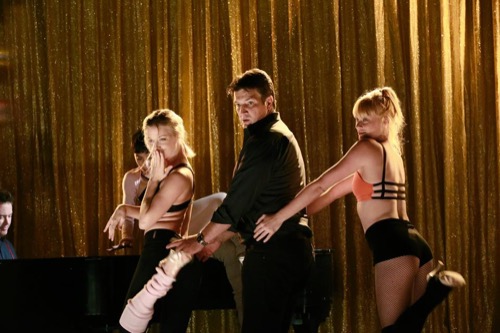 Tonight on ABC Castle starring Nathan Fillion continues with an all new Monday November 23, season 8 fall finale called “Mr. & Mrs. Castle” and we have your weekly recap below. On tonight’s episode an entertainer on a cruise ship is killed.

On the last episode, a seductive con man was killed, and the investigation had Castle and Beckett questioning New York City’s upper crust. Meanwhile, Castle had a surprise in store for his and Beckett’s one-year anniversary as husband and wife. Did you watch the last episode? If you missed it, we have a full and detailed recap right here for you.

On tonight’s episode as per ABC’s synopsis, “an entertainer on a cruise ship is killed, and Castle and Beckett investigate while trapped on the ship with the murderer.”

Tonight’s episode is going to be great so be sure to tune in to CASTLE on ABC at 10PM EST. We’ll be blogging all the action, be sure to hit up the comments and tell us how excited you are for season 8 episode 8. While you wait for the recap, check out a sneak peek of tonight’s episode below!

The body of a Jane Doe was found floating out by the docks. Apparently the victim had been wearing a flapper costume when she died so that that led to Ryan and Espoitio to joke around about her being an Al Capone’s victim but M.E. Perlmutter was thankfully all work.

He knew their victim’s outfit meant she was probably an Iconic cruise line worker. And it turns out he was right, she was and the cruise line was able to idenitify her. The victim’s name was Laura Madden and she had given up her job as an ecowarrior in order to go work on a ship because her family had been dire financial straits.

So that sort of situation might have also explained why, when she was found, there had an 8 ball full of drugs found tied to her back molar.

Laura hadn’t been known for drugs before her change in circumstances but the drugs could have easily have come about thanks to her new job. For as it turns out, cruise ships are notorious for drugs and that’s because they provide the perfect opportunity. Half the people involved in a drug deal will never see each other after a couple of weeks and most of the time the ship itself is in his international waters. Where no one country had jurisdiction over it.

And so Laura probably came across the thirty thousand dollars worth of pure uncut heroin during her line of work. Though admittedly she was just a chorus dancer and that meant she didn’t exactly get to socialize at night.

However what was stranger than a backup dancer getting mixed up in the drug scene was the fact the drugs proved to be help. The drugs itself were later traced back to Vulcan Simmons. A once former friend of Senator Bracken’s. And so Beckett and Vikram felt like they finally had a lead.

But, while they were coming close to getting somewhere, Castle you see had hired Hayley to investigate the text he saw from Vikram to Beckett.

Vickram had sent Beckett a text on the night she was supposed to be celebrating her anniversary with Castle. And it was only afterwards that Beckett found out the text had been sent as a way to distance her from her husband. Vikram admitted in the end that he didn’t want Beckett to get sidetracked but she told him that she wanted to return to her marriage when all was said and done.

But by then, it had already been too late. Castle had Hayley looking into their private affairs and in the interim he decided to follow Beckett onto the cruise ship in order to work alongside her as they investigate Laura’s murder.

However the cruise ship that she had been working on didn’t seem too keen on wanting to help and that point was driven home when they set sail with Beckett and Castle still onboard. So Beckett had a lot of questions that only the captain could answer. And he fed her line about how he had been order into avoiding scandal at any cost.

Thus he made sure that neither Kate or her “partner” could get ahead with their investigation into Laura. He tricked them into only having an hour before another ship was going to stop in order to take them back to New York. And he had told his staff that no one was allowed to speak to them.

Only proved to a problem that both Castle and Beckett were able to overcome. Castle went on to join the dance troop and Beckettt simply asked a couple of nice old ladies about the drug scene. And though Beckett didn’t get anywhere, Castle found out that the shiphands usually hide things on the ship so that no one else could take it.

Robbery being one of cruises’ biggest problems.

And so husband and wife were able to find Laura’s hiding place. But they had counted on her shooting footage of an apparent drug drop.

Laura had taken the job on the cruise to document the trash they were dumping out in the sea when one day she noticed that there was something else in the trash that was being dumped. So Laura took evidence from the scene and she was going to use it as proof for when she went to the cops. But sadly that had never happened.

Laura had been murdered and someone had still be using trash as the perfect cover. So, once they were back on dry land, Beckett took what she knew to Vikram and together they tried to trace the trash back to the pipeline they were investigating. Yet it wasn’t long before Vikram realized they had been hacked and that it was Castle behind it.

So rather than hand over information, Vikram nuked his entire system. Which is merely told Castle and Hayley that their theories about Beckett were right.

And so Beckett and Castle’s collapsed relationship had basically taken over. He had accused her of liking the fact that she’s broken and he told her he couldn’t keep waiting for her to fight another battle. So Castle came very close to pulling the plug on their marriage.

But Beckett didn’t let him.

She had found the man she had been looking for. The same man that knew more about the pipeline than anyone else. Yet rather than getting consumed as she normally would have done, Beckett decided to ask Castle for his help in bringing in ADA Brown.

That way she’s no longer shutting him out.