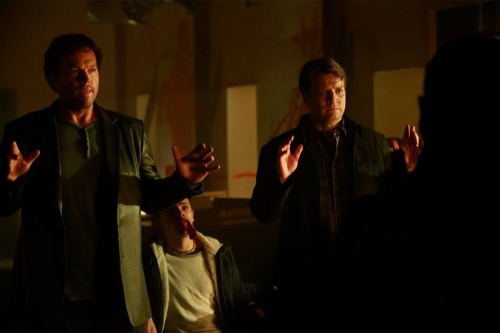 On the last episode, an art thief stole a rare painting and killed the person transporting it, so Castle and Beckett teamed up with the key witness in order to find the culprit. Did you watch the last episode? If you missed it, we have a full and detailed recap right here for you.

On tonight’s episode as per ABC’s synopsis, “Det. Slaughter returns seeking Castle’s help in a robbery case. However, Slaughter becomes a suspect when the heist case turns into a murder case, and Castle’s unsure about whether his pal is innocent or guilty.”

Tonight’s episode is going to be great so be sure to tune in to CASTLE on ABC at 10PM EST. We’ll be blogging all the action, be sure to hit up the comments and tell us how excited you are for season 8 episode 6. While you wait for the recap, check out a sneak peek of tonight’s episode below!

Ethan Slaughter is back for an all new episode of “Castle”. Apparently he was investigating the burglary at Booth Tower and he wanted his old friend Castle’s help because lately he couldn’t even get a partner if he begged.

Like usual, Slaughter had been up to his same old Neanderthal self. Yet it looks like his reputation had taken a particular nosedive when Internal Affairs decided to open an investigation on him and a missing couple of mill from one of his cases. So technically Slaughter was already riding the fence when he later pushed his way onto Ryan and Esposito’s murder case.

Their victim’s name had been Victor Lee and Victor was once Slaughter’s criminal informant. In fact Slaughter also claimed to have an opinion of the other man. Therefore Victor’s death definitely came as a blow but the real reason he needed Victor’s help and was unfortunately let down by his untimely death was because he needed a thief’s input on his case with Mr. Ronald Booth.

Mr. Booth was a tech billionaire and he was about to launch the latest microchip for the next generation cell phone. Thus that same microchip was literally on the brink of bringing in millions, possible even billions when it was stolen from what was supposed to be the most secured building in Manhattan. So Slaughter was going to use his old friend Victor to find out who was selling or about to sell a microchip. Yet, as it turns out, Slaughter might have been had by his number one informant.

Slaughter had thought Victor had turned his life around but Victor’s girlfriend spoke differently. She later mentioned to both Slaughter and Castle that Victor had confessed he was about to be coming into some money. Subsequently it was supposed to be an amount large enough to allow them to start over in California and like Castle pointed out – no way could Victor have afforded such a move on his minimum paying job.

So Castle questioned Victor and in turn made Slaughter doubt Victor as well. And so the guys had one last question for Victor’s girlfriend. They asked if Victor had mentioned anyone new in the last few days and all she could recall was the name Trucco.

And the guys found out that Brian Trucco fenced high tech items for a living. So they came up with a plan to calmly get answers out of the man rather than relying on Slaughter’s old form of interrogation that involved threats and/or fists. But during their investigation, Ryan and Esposito called Castle and they wanted him to tell them where Slaughter was.

It seems it was Slaughter’s fingerprints that was found on the murder weapon in Victor’s case. So that in addition to the ongoing investigation made Ryan and Esposito believe that it was Slaughter that was Victor’s partner in the heist. And that he killed Victor in order to keep the money from the sale all to himself.

Only Castle didn’t buy that story so he protected Slaughter from his friends and the guys continued investigating their robbery/ homicide. And once they figured out that Victor did indeed have a partner, Hayley helped them out with the rest.

She had did some digging into Victor’s movements and she had found out he had gotten involved with a mentoring program. That’s when adults take at-risk youths under their way. Though Victor did a little more than that. He got his kids involved in a heist.

Victor’s kid was Louis Prince. Louis’s advisor at the mentoring program, Mr. West, had thought Victor would be the best fit and in a way he was right. Victor came to be the only other person besides his mother that Louis came to trust. However Victor had used Louis to his own gain and it was that betrayal that allowed Slaughter and Castle to question whether or not Louis could have killed his mentor.

Luckily he didn’t. When they found Louis, he was being attacked by an unknown assailant though he did swear that he hadn’t played a part in Victor’s death before he ended up running off. So Castle felt like Louis really was telling the truth.

He had looked into the teenager’s eyes and all he saw was a scared kid. But Slaughter didn’t think the same until he had gotten hold of the man that was trying to attack Louis. The guy turned out to be a henchmen for David Lacey. David Lacey being a man that runs his own heist crew.

So the guys wanted to know why David Lacey was after Louis and were told that Louis had created a device that could disarm any alarm system. And as for David, he had found out about the all-key after Victor started to try and sell the kids’ services. Therefore Victor had betrayed Louis on more than one level.

But it wasn’t Louis that killed him. Hayley and Alexis did some digging on their end and they have proof that Louis was in Brooklyn when Victor was in the city. So they had proved that Castle had been right about the young man.

And they chose to follow Castle’s lead once again when he kept protecting Slaughter from getting arrested. Ryan and Esposito had found them while they were still with David Lacey’s guy and they had tried to bring Slaughter in. So Castle outmaneuvered them both by stealing their car keys and making off with Slaughter in the backseat.

Though, their hideout location did reveal a few things about Slaughter. They had gone to Slaughter’s ex-wife’s house because she was out of town and there Castle found out that Slaughter had been married to the Madeline Corday. His Maddie being a mezzo-soprano with New York City Opera.

Apparently the couple had met at college. They were both musical theater majors and just hit off. Only that bit of news wasn’t the last surprise.

Slaughter also knew how to cook and liked to use to music while he was it. So Castle suddenly saw a whole new side to Slaughter and was sitting back stunned when Louis reached out to them. It seems Victor had told Louis that if he ever needed help that Slaughter was his man and so Louis reached out when he realized David Lacey was close to finding him.

And so the guys went into rescue mode. They found Louis and they freed him from David Lacey’s guys by using the choreography from West Side Story. So finding out that Slaughter was into musical theater did come in handy.

But it turned out that Lacey hadn’t killed Victor. Victor had been killed by a second burglar that was in the Booth Tower the same time as Victor and Louis. And the other guy had stolen fifty million dollars from Mr. Booth.

So the guys took a look at both of their cases and it dawned on them that only person overlapped. Remember Mr. West from the mentoring program, well, it looks like he had set up Victor with Louis because he wanted to steal from Booth Towers.

Before he had begun working at the center, West had been an accountant that used to work for Booth. Then he hit on Mr. Booth’s wife and she had turned down his advances. So not only was his fired but he was blackballed from every other accounting firm.

And the reason he killed Victor was because Victor had found out about the missing fifty million dollars from Mr. Booth’s private account.