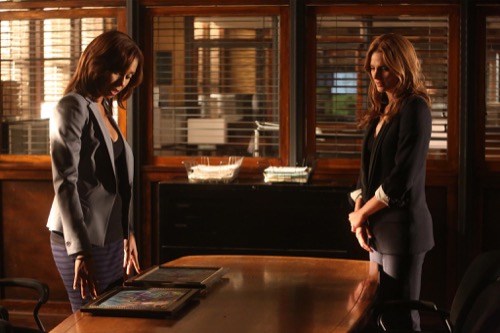 Tonight on ABC Castle starring Nathan Fillion continues with an all new Monday October 19, season 8 episode 5 called “The Nose” and we have your weekly recap below. On tonight’s episode an art thief steals a rare painting and kills the person transporting it.

On the last episode, when Castle’s idol, a famously reclusive author, turned up dead, Castle was determined to solve his hero’s murder. But as he and Beckett dug deeper, they discovered that truth was stranger than fiction. Did you watch the last episode? If you missed it, we have a full and detailed recap right here for you.

On tonight’s episode as per ABC’s synopsis, “an art thief steals a rare painting and kills the person transporting it, so Castle and Beckett team up with the key witness in order to find the culprit.”

Tonight’s episode is going to be great so be sure to tune in to CASTLE on ABC at 10PM EST. We’ll be blogging all the action, be sure to hit up the comments and tell us how excited you are for the season 8 episode 5. While you wait for the recap, check out a sneak peek of tonight’s episode below!

Tonight’s episode of Castle kicks off with a woman walking through a parking ramp, while she is waiting for the elevator, gun shots ring out. She begins panicking and hops in the elevator – and a man with a ski mask on joins her, carrying a metal briefcase, and wielding a gun.

Kate is called to the scene of the crime, they find Justin Fletcher shot to death in the parking ramp. His time of death was at 10:14 AM – there was a 911 call from an anonymous witness. His car was bulletproof (literally) – they think he might have been corporate security. Kate searches his car with Esposito and finds a hidden trap door in the floor of his car – she thinks that whatever he was hiding in the hidden compartment is what got him killed. Kate talks to Justin’s brother and he sees that he was a delivery guy and he left that morning to pick up something called “Falcon.”

Esposito and Ryan are sweating bullets waiting for the results of their seargents’ exams. They head to Mia’s house to pick up the woman that called in the anonymous 911 phone call. Mia is the woman that was in the elevator in the parking ramp, and she is a bit eccentric. Kate sits down to question Mia and learns that she has Hyperosmia, which means she is very sensitive to smells. Mia says that she ran in to the dead guy in the elevator, all she knows is that he was white and he was carrying a silver briefcase. Unfortunately, the parking ramp didn’t have any security cameras to back up Mia’s story.

Ryan and Esposito get their test results back – Esposito passed, but Ryan didn’t – he doesn’t understand how he could have failed and Esposito passed. Castle is still on a mission to win back Kate, he pops up at the police station and kate informs him that she is going to stop by the loft later to pick up the rest of her stuff, it seems like they aren’t getting back together any time soon.

Haley shows up at the police station – she wants in on the investigation. It turns out that the insurance company hired her to get back the item that Justin was transporting. It was a $65 Million Van Gogh that was purchased at an auction a few months ago. The insurance company obviously wants the art back and doesn’t want to have to fork over $65 Million to the owner. Haley says she will help them find the killer, and the killer can lead her to the Van Gogh. Esposito finds an ATM camera near the parking ramp – he thinks he may have found the killer. A man named Freddie Stark left the parking ramp a few minutes after the shooting.

Castle meets Mia leaving the police station and gives her a ride home. Mia says that Kate is still in love with Beckett, she can smell her hormones raging on her when she was talking to Castle. He is impressed by her Hyperosmia and gives her a ride home. He wants Mia to to help him win Kate back, Castle gets to talking to Mia and realizes that she knows way more about the killer than she told Kate. Mia confesses to him that she smelled an oil painting in the brief case – he calls Kate at the precinct and tells her that he got a break in the case. Kate can’t believe that he is weasling his way in to another one of her cases.

Castle brings Mia back down to the police station and they put Freddy Starks in a line-up, instead of ID’ing him – Mia walks through the line of guys and smells them all. Mia clears Freddy and says that there is no way that he was the killer in the elevator with her. After the line-up, Kate lies and tells Freddy that their witness did ID them. Freddy admits that he was at the parking garage – but when he got there Justin was already dead. Freddy says that Justin’s boss Gillian paid him to go steal the painting from Justin after he sent him on the trip to transport it. It sounds like Tom Gillian was setting up his own employee Justin Fletcher.

Things are a bit awkward between Ryan and Esposito since they got their test results back, but they head out to talk to Tom Gillian – Justin’s boss. He says he doesn’t know anything about Justin’s murder. Gillian admits that he hired Freddy Stark to retrieve the painting, Justin got greedy and took the job because he gets paid on commission. He stole the job from his co-worker Liam – and it cost him six figures.

Esposito and Ryan find Liam and follow him in to an abandoned building, he tries to make a run for it. Ryan and Esposito are searching the building and gun shots ring out – Esposito panics and sees a shadow and shoots his gun. He winds up shooting his partner Esposito in the butt. Ryan heads back to the precinct and reassures Kate that Esposito will be fine – he just needs a few stitches.

Kate puts an APB out on Liam’s Rolls Royce. Haley calls Castle, she thinks that Liam might try to sell his car for some quick cash to get out of town – she gets Castle on the case to search car salesmen to see if Liam visits them. They pull Liam’s phone records and realize that he called a billionaire art dealer named Hawthorne. He confirms that Liam tried to sell him the Van Gogh and he turned him down, then he tried to sell him a used Rolls Royce.

Castle drags Mia to a car salesman’s warehouse who just bought the Rolls Royce. Liam shows up and demands to know why Mia and Castle are snooping around his car. Mia is in the driver’s seat, she backs the car up in to the car dealer and he falls in the trunk – Castle slams the trunk on him. They call Ryan and Esposito for back up – they show up and bring Liam in to custody.
Back at the precinct, Liam insists that he isn’t the one that shot and killed Justin. Liam says that he was at the parking garage, but when he left – Justin was alive. He says that he confronted Justin that morning in the parking garage, and Justin apologized and gave him the painting and he left. They think that they have the case wrapped up, but then Mia reveals that the painting they found in Liam’s car is a fake – the oil smells too fresh, there is no way it was made in the 19th century.

Castle takes Mia back to his house so that his mother can cook her a bland meal that doesn’t smell. While they are eating dinner there is a knock at the door, Castle thinks it is the take-out guy and opens the door –he gets a gun pointed in his face. Castle demands to know who he is – the man says it is not important. He tells Castle that the Van Gogh belongs to his family, and there is no way he is going to let it sit in some billionaire’s man cave. The man wielding a gun tells Castle that he is taking his mother and Mia hostage and he will kill them if he doesn’t go to the police station and get the painting. Castle manages to take out the man, and accidentally breaks Mia’s nose in the process.

Castle calls Kate, and the police take Lorenzo in to custody. Lorenzo explains that he has been searching for the Van Gogh for years. He didn’t kill Justin though, he was Justin’s partner. Justin jumped Liam’s transporter job, and he was going to switch the Van Gogh with a forged one. Justin was at the parking garage to meet the man that was going to sell him a forged painting to switch with the real one.

Kate and Castle head back to the parking garage to search for clues. They realize that the killer was standing next to a leaky air conditioner while he was waiting for Justin, and they find a piece of his hair stuck in the air conditioner. Kate rushes the hair back to the precinct to test it for DNA – they find a match and bring Justin’s brother Graham in for custody. It turns out that Graham went to the art institute and was an amazing painter – but he also had a gambling problem. Justin cracks and says that he never meant to kill his brother, he just really needed the money.

Now that the case is finally solved, Haley can take the real painting back to the insurance company that hired to recover it. Meanwhile, Esposito is still ignoring Ryan after he shot him. Ryan begs Javi to forgive him, they try to hug it out and Ryan accidentally kicks Esposito’s cane out from underneath him. Esposito rants that he knows Ryan keeps hurting him on purpose because he failed the exam. Castle pays Mia a visit and brings her flowers to apologize for breaking her nose. She thanks Castle for helping her live again.