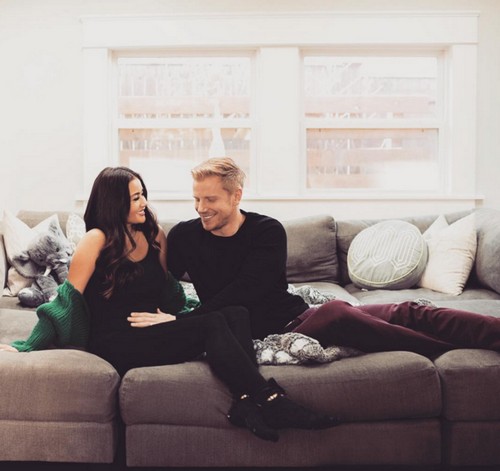 Are former Bachelor Sean Lowe and his pregnant wife Catherine Giudici having a baby as a last ditch effort to save their marriage? It really looks that way considering the Bachelor baby news came just days after a promo aired for the WE TV network hit Marriage Boot Camp showing the Bachelor couple going through some shocking relationship drama.

Just days after revealing in a Marriage Boot Camp sneak peek that their relationship was anything but perfect, Sean and Catherine announced that they are expecting. The timing of the Bachelor baby news coming so quickly after learning that Sean Lowe often threatens to quit their marriage put a damper on the good news.

Sean Lowe revealed that he was finally going to be a father via Instagram. The excited father-to-be posted a photo of himself and Catherine to Instagram on Monday, December 8 and captioned the snap, “It’s happening! I’m going to be a dad!”

It’s common sense that adding a baby to the mix of any relationship adds a whole extra layer of difficulty. It is never a good idea to try and save a relationship by getting knocked up but it looks like that is exactly what Catherine Giudici did. Maybe the season 17 winner of The Bachelor thinks that Sean Lowe won’t really leave her once their baby comes.

Sean and Catherine have been the sweethearts of Bachelor ever since their season 17 matchup. The ABC hit reality show often uses the successful marriage of the Lowe and Giudici as an example of the best of The Bachelor but now it looks like things aren’t so perfect after all.

Now Sean and Catherine will have to figure out how to get along with each other while also dealing with all the changes and challenges related to pregnancy. Who knows if the Bachelor sweethearts will even be able to hold their marriage together long enough to face the stress of caring for a brand new baby too.