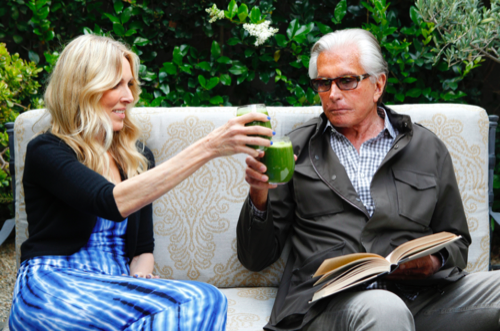 On the last episode, the wives of Sean Lowe and Jason Mesnick, former cast members on “The Bachelor,” swapped places. Sean’s wife left behind her life as a full-time homemaker in Dallas and headed  to Seattle, where she takes on Jason’s wife’s job as a morning radio-show host. Did you watch the last episode? If you missed it, we have a full and detailed recap right here for you.

On tonight’s episode per the ABC synopsis “George Hamilton is an iconic actor who has appeared in numerous movies and television shows including the classic film “The Godfather Part III.” Hamilton’s ex-wife is actress and former model Alana Stewart. Even though the couple was only married for five years, they’ve remained close and share a home together in Beverly Hills, CA. The couple employs a staff that oversees all of their needs, from cooking and cleaning to managing their schedules. George and Alana enjoy a stress-free, quiet life together practicing yoga and meditation on a daily basis and sticking to a healthy diet. Angela “Big Ang” Raiola is a reality TV star known for her role on VH1’s “Mob Wives.” “Big Ang” lives in Staten Island, NY with her husband Neil, a sanitation worker, and her children: Anthony, his wife Gabrielle, daughter Raquel and step-daughter Brianna as well as grandchildren Salvator, Angelina, Arabella and Anthony. “Big Ang” loves her loud and boisterous life with kids and grandkids coming and going all the time. “Big Ang” runs the home, taking care of all of the household needs and regularly prepares big, Italian dinners for the family.”

We will be covering tonight’s Celebrity Wife Swap, season 4 episode 10. You don’t want to miss this episode; you never know what craziness is going to break out! Don’t forget to come back to this spot at 8PM for our coverage of the episode.

The incredible actor George Hamilton (primarily known for his tan) and his ex-wife/ strange soulmate Alana Stewart (she also happened to have married and divorced Rod Stewart) have decided to swap wives with Mob Wives Angela “Big Ang” Raiola and her husband who is a nice sanitation worker on tonight’s episode of “Celebrity Wife Swap”. And, well, things looked like it was going to be chaotic even as everyone was describing their personalities.

Alana is a woman that has raised her kids and like that they have been put out to pasture. So, back at her house, everything is neat and in its right place. And there’s no one there, besides George that is, that will kick up a fuss.

But Big Ang is Alana’s complete opposite. She likes things to be loud at her house and her children are always welcomed to come over for dinner. Even if it’s all at the same time. Plus Ang tends not to follow the healthy eating edict that Alana does. So she came close to tears when she saw only vegetables in the refrigerator.

And over in Staten Island, Alana was freaking out when she realized how many grandchildren that Ang has. Especially when she was asked to baby-sit while she cooked pasta from scratch. So these two women were in for a trial.

Yet Ang did find one thing to love about the swap. It seems she’s a big George Hamilton fan and if she has to do spiritual meditation (which she believes is all crap by the way) then she was glad to do it with George. And, anyways, Ang is a flirt. Thus she likes to flirt with George and he in turn can use his charm on her to get her to drink her health drinks.

Alana, though, was put through the ringer on her first day. After she had cooked a meal that included pig feet that this vegetarian has never eaten or cooked before, she then found out that she was hosting a drinking party for all of Ang’s friends. And these ladies refused to let her sleep. So Alana was left dead on her feet on Day One.

And really Day Two wasn’t all that much better.

Alana barely made it through watching all four of Ang’s grandkids. And again she was tired when she went out to represent Ang at an event. So the funniest thing happened there. Alana broke down and dropped the “f” bomb on a crowd of people that were asking for it in an unusual display of anger. That in other words would be something Big Ang would have done.

And that’s why on the Rule Change day, Alana came up with a lot of new rules for Ang’s family to follow. Alana you see has noticed how many things Ang is doing for others but that aren’t really being returned. So she got Ang’s daughters to doing the cleaning for once and she got rid of the free daycare.

Thereby leaving her chance to relax and enjoy a quiet dinner at home.

But, back in LA, Ang had been left feeling bored by Alana’s lifestyle and she chose to shake it up by bringing George outside to get dirty.

George hasn’t been a blue collar type of a guy for a while now. Hence the first thing Ang did as part of her rules was to get rid of his assistant that simply does everything for him. And had George travel around in a garbage truck working.

See, it was part of Ang’s plan to connect him with everyday life again. And so she took him to Hollywood Boulevard where he got to bask in being George Hamilton. Then she had a big dinner back at the house with some of her friends and George actually enjoyed that as well.

Alana normally doesn’t have big family dinners so a change from that would be nice and he later discussed that with his ex-wife at the sit-down.

Alana had told Ang that sometimes it could be ok for step back. Ang had a tumor in her throat that she was still dealing with and Alana knows what cancer can do to a person. So she advised Ang to give her body a rest every now and then. And Ang, being her blunt herself, told Alana relax on some of her house rules.

Have family dinners and go out to more than just a health restaurant. And surprisingly Alana did listen. She started to spend more time with her kids and grandchild after her experience with Celebrity Wife Swap.

Meanwhile, Ang went ahead with another surgery yet refused to slow down or take care of herself first. So, all in all, at least both Alana and George got something from all of this.

And now George takes out his own trash.