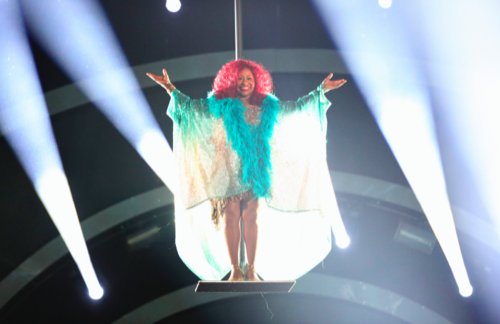 Tonight on ABC Dancing With The Stars returns for a second week and Chaka Khan and her professional dancing partner Keo Motsepe danced a Foxtrot routine. On tonight’s episode the 13 couples dance to a song that commemorates the celebrity’s hometown. Did you watch tonight’s episode? If you missed it we have a full and detailed recap, right here for you. Did you miss any of tonight’s performance videos? If you did we have them all, right here for you!

On last week’s premiere episode of DWTS Chaka performed a Cha Cha Cha and the judges scored Chaka a 13/30 for her performance. Carrie Anne loved his performance and had this to say, “That was my groove in high-school! I can’t believe you are performing in front of us, it’s fantastic to have you, such an honor. It was super fun, but you were having so much fun – sometimes you forgot the choreography. But, it’s only week one!”

Judges’ comments on Chaka’s Week 2  Foxtrot: Julianne: “You were on an upward gradient! It took a minute to get there. It was a very nice improvement. You stretched those lines, you filled the space and we feel that. That’s what we all want – to feel something.” Bruno: “One you got going it was like cruising along the Lake, majestic! You didn’t think, and that is important my darling. It’s a step forward.” Carrie Ann: “What I love about you is your incredible smile when you dance. Like, you make a mistake but you keep it in check – you aren’t blowing it out of proportion. It’s dancing, it’s supposed to be fun, tomorrow I want you to really memorize that choreography. I want to see you when you don’t forget the choreography because I know there is something magnificent right there.”

Watch the video below and let us know what you think, do you agree with the judges comments? Do you think Chaka did enough to avoid elimination tomorrow? Sound out in the comments and let us know your thoughts?