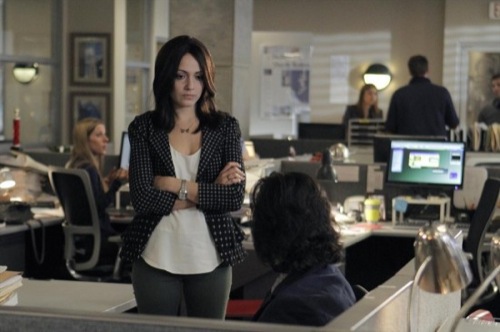 Chasing Life returns to ABC Family tonight for with all new Monday January 19 season 1 episode 12 called “Next April,” and we have your weekly recap below. On tonight’s episode April [Italia Ricci] returns to work after a four-month absence and fumbles her first assignment for her new boss. Meanwhile, Sara [Mary Page Keller] searches for Natalie’s mother; and an overzealous Brenna looks forward to reuniting with Greer at school.

On the last episode April began her battle and month-long hospital stay with mixed emotions. Her resolve to fight started to wane as her treatments took a toll. Not sure she could be cooped up in the hospital for much longer, April began to panic. With her family by her side, April made a surprising outreach to someone who may be the only person who could help her. Did you watch the last episode? If you missed it, we have a full and detailed recap right here for you.

On tonight’s episode as per the ABC Family synopsis, “after leaving Leo flat-lining at the end of the Christmas episode, April must deal with the outcome of the surgery. Facing her new reality, she must also face her first day back at work after being gone for four months. In remission and determined to move on with her life, her return reveals a new, young and ambitious boss at the paper who is ready to shake things up. But April’s attempt to make a good impression may fall short when she botches her first assignment.”

Leo is alive although the technicality of it actually means Leo is barely alive. For you see even though his surgery did remove all traces of the tumor – the effects of such a risky procedure have now left him in a coma. And that’s one thing Leo never wanted to happen to him. In fact that’s the main reason why he didn’t want to have the surgery in the first place – he was afraid he was going to end up a vegetable.

Yet, no one has given up hope on him recovering. His doctors, his family, and also April believe Leo is going to wake up from this. And that isn’t false hope on their part. Leo has been turning his head whenever he hears his mother’s voice. So there is progress with his case.

And in the meantime, April for the most part has been trying to move on with her life whenever she’s not visiting him in the hospital.

April has been getting better with handling chemo but it seems she’s still going to need a bone marrow transplant. And unfortunately the closet blood relative she has left who hasn’t been tested is her half-sister Natalie. So April wants to reach out to her to see if she’s a match and before she could do that she had needed her mother’s blessing. Because Natalie is still sort of a sore subject with Sara.

It hasn’t been easy for Sara. She’s still is angry about her husband having an affair and him impregnating someone else is not just an average day hurdle. So when she volunteered to reach out to Natalie’s mother (her husband’s mistress) for April – at first she jokingly wrote a hate filled message.

It was supposed to be a way to vent out her feelings however Sara had never intended to send the email and her elderly mother got confused by the keyboard. So now a nasty message is out there that has the potential risk of coting April a donor that can save her life. And that’s if she wants to still have a life after she made such a huge career mistake on her first assignment back.

April had wanted to impress her new boss so she told him to treat her like everyone else and that’s what he ended up doing. He asked her to interview a close successful friend of his and April flubbed it by not recording the session. Apparently, chemo has impaired her memory so she basically had nothing to fall back on when it came to writing up her assignment.

Thankfully, April was saved by Raquel yet Raquel had also warned her about this new direction of the paper. For it seems their new boss is also new to journalism and he has no idea what he’s doing. Aaron Phillips snapped up the paper on the cheap and he thinks he should run like an investment instead of a real paper.

So April’s is safe, for now that is, and now all she has to deal with at work is Dominic. Dominic appears to still be angry with her and he’s been trying to avoid her at all costs.

Which is something April is getting used to because Natalie and her mother did decide to come for a visit and it turned out Brenna was right about their sister. Natalie was dismissive towards them and her attitude left a lot to be desired. So when their meeting was cut short – April was relieved.

Though she wasn’t happy about why the meeting came to an end. It seemed Brenna was close to getting arrested after she tried to sneak in to Greer’s house to see her. Greer still has feelings for Brenna but as long as her parents are against it – Greer is strong enough to go against them. Hence the sneaking in that eventually went terribly wrong.

Greer’s parents called the police and Sara had managed to talk them out of pressing formal charges. But they told Sara to keep her daughter away else they won’t go easy on Brenna a second time.

Meanwhile, Natalie agreed to get tested and that meant April only had one thing left to worry about – Leo. Who walk up from is coma asking “what’s next?”