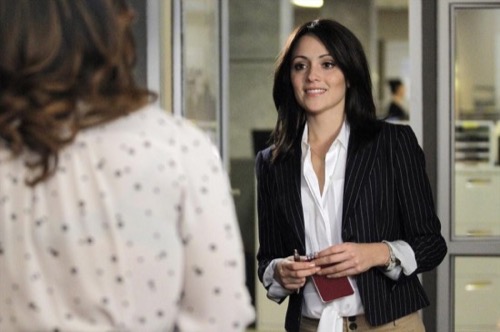 Chasing Life returns to ABC Family tonight for an all new Monday January 26 season 1 episode 13 called “Guess Who’s Coming to Donate,” and we have your weekly recap below. On tonight’s episode, Natalie learns she’s a donor match for April [Italia Ricci], but she’s hesitant to undergo the procedure.

On the last episode after leaving Leo flat-lining at the end of the Christmas episode, April had to deal with the outcome of the surgery. Facing her new reality, she also faced her first day back at work after being gone for four months. In remission and determined to move on with her life, her return revealed a new, young and ambitious boss at the paper who was ready to shake things up. But April’s attempt to make a good impression fell short when she botched her first assignment. Did you watch the last episode? If you missed it, we have a full and detailed recap right here for you.

On tonight’s episode as per the ABC Family synopsis, “Natalie learns she’s a donor match for April, but she’s hesitant to undergo the procedure. Meanwhile, April takes on a soft-news assignment to please her boss; Brenna and Natalie spend time together; and Beth’s relationship with Graham causes problems.”

Leo is awake now but he’s making everyone around him regret what they thought was going to be miracle. Consequently, on tonight’s episode, Leo hasn’t been himself since he woke up from his coma. It seems he forgot a few things (the surgery messed with his short term memory) and lately he’s been questioning his loved ones about why he changed his mind about the surgery.

Apparently, he doesn’t remember April talking him into fighting his tumor. So he’s been upset about his lack of motor skills (which is what he feared all along would happen) and he’s taking that out on everyone brave enough to come near. April included!

And, well, April hasn’t had easy herself. Her boss has put her onto “soft” pieces because he doesn’t trust cancer girl enough to put her on the more interesting pieces. Plus, after she flubbed her last article – he probably wants to play it safe with her.

However, such a move has set April’s career back some. And the one good thing she does have to look forward to – Natalie’s testing – came back with both good and bad news. Natalie did turn out to be a half match and yet because it’s only half a match that means the marrow has to be directly taken from her bone. And such a procedure has frightened Natalie. So much so she wants to pull out on donating.

Sara and George tried to intervene but all they got was a “I’ll see”. So it’s a toss-up on whether or not Natalie will come through.

In the meantime, though, Natalie has oddly changed her mind about having a younger sister. She approached Brenna and asked her to come to a party that she had been invited to. And Brenna wants to go. Brenna feels like if maybe they bonded – she could possibly get Natalie to change her mind.

But someone drugged Greer the last time these two hung out and in spite of April’s optimism – Brenna doesn’t trust her new “sister”!

Anyways, it’s a good thing she’s on guard. Because the first thing Natalie did when they met up later on was to give her underage sister a beer. A beer! Even though she knows Brenna is already trouble with her mother and that Brenna had to lie in order to attend the party in the first place. So what is Natalie really up to?

Does she want to bond is this another one of her games?

As for Leo, he’s acting just as oddly. He suddenly changed his visitor’s list and now April can’t visit him in the hospital. Though, she didn’t let a little thing like that stop her. She found Leo at his physical therapy and demanded answers. And do you know what he said to her – he said they weren’t friends.

The four months he spent in a coma didn’t mean a thing to him. So this relationship she’s built up is completely one-sided. And April was so hurt by that – she told him ok. She’ll give him the space he so desperately wants.

Yet the bad news just kept on rolling in because April’s new boss would go on to try and exploit her cancer. He told her he wanted a sappy Oprahesque piece and when she attempted to write about insurance companies robbing people in need – he told her he wanted a chick article. Meaning he wanted women to cry when they read what she wrote.

So April rewrote her paper and she did put her heart into it. But she hadn’t done that for her boss. She wrote about her experiences so that other people going through a similar situation didn’t feel alone.

And after Brenna and Natalie came home drunk from their tailgate party – April had to put some of her experiences to use.

For it looks like Natalie was sincere when she told Brenna she wanted to hang out. And though she doesn’t have the best judgment (i.e. the underage drinking) – Natalie was hurt when she found out Brenna had only hung out with her in order to change her mind. So later April went to Natalie and told her it was ok if she didn’t want to donate. She knows how it feels to be exploited.

Then, she told Natalie that she still wanted to get to know her. No strings attached. And surprisingly that acceptance alone is what got Natalie to finally agree to donate.

And back to Leo, April told him that she didn’t want their friendship to end over something so stupid. So for the time being – he’s got to stop being so melodramatic!