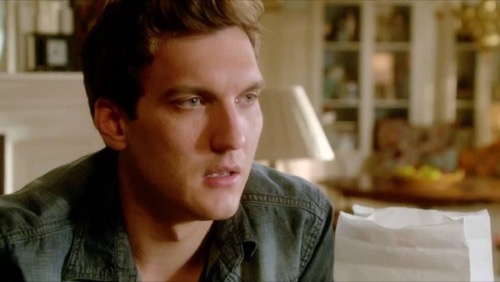 Chasing Life returns to ABC Family tonight for an all new Monday February 16, season 1 episode 16 called “The Big Leagues,” and we have your weekly recap below. On tonight’s episode, April [Italia Ricci] uncovers a big story concerning a baseball player, but it creates an ethical dilemma for her. Meanwhile, Leo [Scott Michael Foster] grows increasingly uncomfortable with his family’s affluence; and Sara [Mary Page Keller] gets into a dispute with her office neighbor.

On the last episode April started to regret becoming such a homebody, especially when she learned Beth had been partying without her. When Beth hosted a house party, April let loose – a little too loose – which lead to a major blowout with her friend. The new school year found Brenna feeling alone and bullied, but an old friend proposed a truce to take down a common enemy. Meanwhile, Leo got some valuable advice from Sara and ended up getting a job, but he found the new experience more challenging than he expected. Dominic had an awkward encounter with Natalie. Did you watch the last episode? If you missed it, we have a full and detailed recap right here for you.

On tonight’s episode as per the ABC Family synopsis, “April gets some welcome news from Dr. Hamburg that bodes well for both her and Leo. At work, she gets wind of a possible story opportunity with baseball player Richie Miranda, but when she gets a bigger scoop than she bargained for, she is faced with a tough moral choice. Meanwhile, Leo grows increasingly uncomfortable living in the shadow of his family and their wealth and looks to Sara for guidance. Sara feels a need to make more of a positive impact with her therapy work after a clash with her office neighbor, an immigration lawyer. And Greer makes a bold change in her behavior at school that intrigues Brenna.”

Tonight’s episode begins now – Refresh Page often to get the most recent updates!

April received good news on tonight’s new episode of “Chasing Life”. It seems the doctor is willing to ok her for sex. Which is good however April now realizes maybe it’s not the best idea to always have her mother there when she goes to see the doctor. April had put off her mother during the sex talk by asking to speak to her doctor on her own. But then Sara wanted to know afterwards what they talked about. So April lied. She told her mother that she wanted to talk with her very married doctor about the doctor’s boyfriend.

April and Leo haven’t been together in “that way” since chemo (for her) and coma (for him). And April misses that aspect of their relationship. So at the first opportunity she got – she practically jumped him.

And, truthfully, Leo hadn’t mind. Although the next morning, things were kind of awkward as April tried to sneak him out of the house before her mother noticed. Which was unsuccessfully by the way. Hence, Sara and Leo ended up having a good laugh at April’s expense.

Yet, once all jokes were put aside, Leo found himself needing to talk to Sara. In the professional sense at least. Sara is still a therapist and it seems Leo needs direction. He doesn’t know what to do with his life now that he’s tumor free, but he knows he doesn’t want to spend the rest of his life living off of his dad.

So Leo is having an identity crisis. And in a strange twist his girlfriend has never been surer of what she wants than ever!

April knows she wants to be a writer. But she doesn’t want to spend the rest of her life being known as the cancer girl. So at the moment she’s chasing a story that would hopefully get her boss to see her as something more than puff material. And whilst she’s doing that, she’s also going after a heartfelt article about a young teenager with cancer.

Meaning April is willing to do the grunt work to get where she eventually wants. Leo on the other hand just wants to find something now and run with it.

And in the meantime, Brenna and her friends have found out for themselves that life isn’t that easy. Greer, who has been acting strange for a while now, suddenly showed up at the tattoo parlor. She had told Brenna at the time that she had wanted to hang out but soon no wanted to hang out with a girl that was showing signs of being a psycho. Their words!

Greer was acting out of character and it had gotten so bad that no one else could take being around her. Including some of her supposedly good friends back at school. So Brenna did what she had to in regards to her ex. She cornered Greer and finally got her to talk. Because, really anyone could see Greer wouldn’t have acted out of she didn’t want people to notice.

And Greer did have something pressing on her that she wanted to share. It seems she has a condition. One that apparently needs to be modified by a strict regimen of meds yet Greer hasn’t been taking them.

It looks like Greer doesn’t appear to like her medication, the same ones she wasn’t allowed to be drinking while she was on in case another Florida situation crops up, and now that her parents are away on a business trip or whatever – Greer has decided to “free” herself. But, unbeknownst to the poor girl, she’s actually more of a danger to herself without her meds. So Brenna and Kieran chose to keep an eye on her until her parents get back.

They knew they could keep Greer from getting into trouble and while she’s was coming down off her high – they also got her to open up. And soon they were all talking about where they’ve been. Though, no one had a shocking story like Brenna. Because although she didn’t get an inappropriate tattoo of a teacher’s name or stop taking her meds – Brenna had a secret abortion that only two people knew about. And neither of them were family.

So, yeah, Leo has been through some rough stuff but he wasn’t the only one. And his past is no excuse for why he followed April to an assignment and then was busted doing a line of coke.

Leo says that’s who he was before he got sick and somehow that’s supposed to be enough for April who caught by the way doing drugs with the guys she was going to get a story on. So April threatened him. She said she could always write a story about him and that got them both to a point where they clearly needed a break from each other.

And yet April did write a story about what she saw. It’s just that in the finishing article, she left out Leo’s involvement and simply wrote about a professional ball player doing drugs. So right now April is considered to have gained the scoop of the year.

But at what cost?