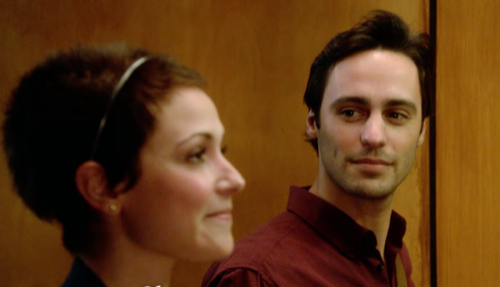 Chasing Life returns to ABC Family tonight for an all new Monday February 9, season 1 episode 15 called “April Just Wants to Have Fun,” and we have your weekly recap below. On tonight’s episode, April [Italia Ricci] lets loose at a party at Beth’s [Aisha Dee] house, which leads to a fight between them. Elsewhere, a lonely Brenna [Haley Ramm] gets bullied at school; Leo [Scott Michael Foster] follows Sara’s advice and gets a job; and Dominic and Natalie have an uncomfortable encounter.

On the last episode while April and Leo tried to chart new relationship waters, April and Dominic spent an incredibly awkward night together covering the same event for the newspaper, and it was clear that the pain of their breakup was still very fresh. With Dominic’s heart on his sleeve and not knowing where she stood with Leo, would April be more confused than ever on what to do about either guy? Meanwhile, Natalie and George had some unexpected news for the Carvers. Did you watch the last episode? If you missed it, we have a full and detailed recap right here for you.

On tonight’s episode as per the ABC Family synopsis, “April starts to regret becoming such a homebody, especially when she learns Beth has been partying without her. When Beth hosts a house party, April lets loose – a little too loose – which leads to a major blowout with her friend. The new school year finds Brenna feeling alone and bullied, but an old friend proposes a truce to take down a common enemy. Meanwhile, Leo gets some valuable advice from Sara and ends up getting a job, but he finds the new experience more challenging than he expected. Dominic has an awkward encounter with Natalie.”

Beth quickly stopped the Natalie and Dominic kiss the moment she caught them at it. So, afterwards she had to explain herself to the slight dazed and confused couple because Dominic really wanted to know why she was interfering in what he was hoping was going to turn out to be a very good night for him. And so Beth had no other choice but to come clean.

She ended up dropping the ball about who Natalie really was and whatever feelings the couple had before instantly evaporated after they both realized the kind of line they just crossed. And it was pretty big line they stumbled upon. Though Natalie later tried to treat what happened as a joke and even told April all about it thinking she would give her sister a pretty good laugh.

But that wasn’t the case with April. When she heard what had happened – it left a pretty bad taste in her mouth and she was left comfortable by it. And nor was she happy about learning the news from Natalie rather than from Beth. You see, Beth is supposed to be her friend and April actually was more upset about her friend hanging out with her sister than she was about Dominic.

However, Beth downplayed her recent increased dealings with Natalie. She told April that she was hanging out with someone else because it was pretty unavoidable seeing as Natalie was her new roommate. But there was also a part of Beth that missed going out.

Since April got sick, the two of them have been mostly stuck indoors watching TV and Beth is still in her twenties. So rather than be honest with April about how she truly felt – she started secretly hanging out with Natalie. Unfortunately, though, someone forgot what secrecy meant and several photos were posted in Instagram.

April had found those photos and then she started to worry about her friendship. Other cancer survivors had put ideas in her and head and now she was afraid Beth was going to ditch her because of her cancer.

So to stop that from happening, April suddenly wanted to go out partying with Beth and her sister Natalie. Meanwhile, her other sister Brenna was busy trying to ward off cyber bullies by hiding out at home.

Sadly, Brenna’s ex had told a friend about what happened over the break and now everyone at school thinks Brenna is a freakish stalker. And Brenna doesn’t even have friends to come help cheer her up.

Though not all hope is lost because Ford, unexpectedly mind you, came back into the picture just when she was needed. Apparently she doesn’t like Brenna’s main tormentor either and she figure they could make an alliance against her. At least that’s what she claimed when she stopped by.

Yet, she later admitted to missing Brenna. The two of them were really good friends before Brenna’s ex Greer kind of ruined everything.

So things were beginning to look up for Brenna right when April was going into crisis mode. After valiantly trying to keep up with healthy twenty year olds, April was coming apart. She was tired all the time and on top of that she was growing more and more jealous of Natalie.

Usually, Leo would have been the perfect balm to such a situation but he wasn’t doing so well either.

Sarah had convinced him to start thinking about his future and so he got a job. However, that job lasted less than a day because Leo ended up getting frustrated by his still healing motor skills.

Hence April was on her on at the housewarming party Natalie and Beth threw. And what started off as harmless fun got ugly when April had too many drinks.

It seems April is the sort of drunk that lashes out and several people in fact ended up being a target. Most especially Beth who finally came clean about how she felt. She told April that everything about her and that sometimes she doesn’t want to put herself first for a change.

They had a huge argument and by the next morning – April didn’t even know if they were still friends.

Thankfully, though, Beth is the forgiving sort. And once they talked it out – April no longer felt jealous. And she stopped comparing herself unfavorably to Natalie which was the real blessing.