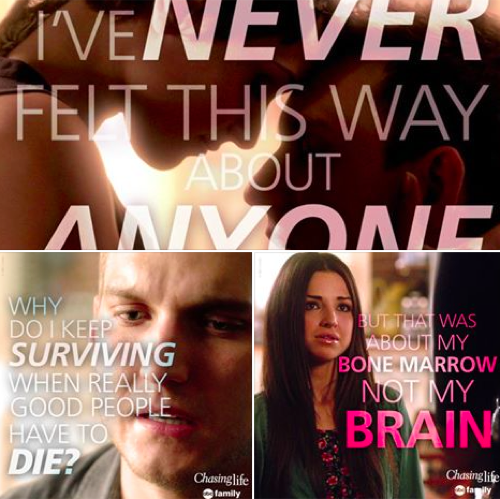 Chasing Life returns to ABC Family tonight for an all new Monday March 9, season 1 episode 19 called “Life, Actually,” and we have your weekly recap below. On tonight’s episode, April [Italia Ricci] and Beth [Aisha Dee] want to know each other’s boyfriends better, so they arrange a double date. Elsewhere, Sara’s [Mary Page Keller]  laid-back fling gets complicated; Dominic [Richard Brancatisano] and Natalie bond; and Greer [Gracie Dzienny] seeks out Brenna in the wake of a quarrel with her mom.

On the last episode some cancer symptoms reappeared, which lead April to panic and seek out ways to deal with anxiety. Elsewhere, Brenna felt overwhelmed by the pressure Sara was putting on her regarding college; and Beth neglected her personal life because of work. Did you watch the last episode? If you missed it, we have a full and detailed recap right here for you.

On tonight’s episode as per the ABC Family synopsis, “April and Beth confide their doubts about each other’s boyfriends and decide to arrange a double date to get to know the guys better. April tries to hide her disappointment when Leo pulls away from the cancer support group while Beth and Graham find themselves at odds over a recent big decision. Dominic gets closer to Natalie after learning they share a sentimental connection, but Natalie worries about what April might think. Meanwhile, Sara wants to keep her latest fling easy and uncomplicated but then learns something shocking about her lover. And, after a fight with her mother, Greer turns to Brenna for support.”

Well, Leo and April are back together but unfortunately not everyone is as thrilled about it as April. On tonight’s all new episode of “Chasing Life”, Beth has some concerns about Leo. You see as April’s best friend, she’s heard all about him (from the bad to the truly horrible) and she isn’t all that sure he’s the right guy for her friend. So, when she was confronted with their reunion, she just couldn’t keep quiet and simple had to tell April how she felt.

And April doesn’t want her best friend and boyfriend to be at odds. So she told Beth they should throw a dinner party with the guys. She thinks that way Beth can see how wonderful Leo can be and April in turn could also do to learn some more about Graham. As far as she was concerned, Graham was always merely Dominic’s roommate and an often irritating one at that.

Back when April and Dominic were together, Graham was always complaining about the noise and he could also be kind of frustrating at times. So at this dinner party, April promised Beth she was going to look beyond their past relationship. However, after listening to a few things April has said, Beth began having doubts about moving in with Graham.

Thus, when the couple did sit down for dinner, it was sort of a tense environment. Apparently, April and Leo have been having their issues as well so no one ended up being the perfect example of relational bliss.

Leo, it seems, wants to distance himself from all things cancer. He says that is his way of living in now, but by cutting everything that is cancer related – he’s made April worry about their relationship. After all, she’s still in recovery and there’s a chance she can relapse at any time.

Speaking of backsliding, though, Greer is once again causing issues in Brenna’s life. According to her, she tried talking to her parents about them possibly staying home more and all her mother took that to mean is that Greer was being disrespectful towards them. So Greer ran away and has been staying in Brenna’s room for the last couple of days.

Sara eventually found out about it but seeing as Greer was reportedly having a rough time – she decided to let it slide. Yes, Brenna shouldn’t have been around Greer yet after the day she had – Sara didn’t feel it was her place to judge. The guy she was interested in and had even been making out was ultimately revealed to be married.

So now Sara has been on both sides of the cheating issue. And after finding herself entangled in a second love triangle, Sara realized she needed answers. She returned to the office and she asked Owen about his marriage and as it turns out he has an open one.

Owen can do as he likes and so can his wife. But the two of them do love each other!

And as for April and Beth, they realized that in order for their respective relationship to work – they were going to need to compromise. Beth had had an anxiety attack when she came close to signing off on an apartment and moving in with Graham. But April told her it was ok if she was freaking out.

On her part, though, April didn’t have to stop pushing Leo about getting involved in their old charities and support group. Because, in the end, Leo decided to continue doing good work with cancer patients and he even showed up at a charity function he knew April was attending. Right before, that is, he announced he loved her in front of everyone.

It was so heartfelt that others in the audience realized they wanted the same thing. Take for instance, Greer and Brenna. Greer told her parents about their parenting and they essentially cut her off after she voiced her disapproval. So she’s been staying with Brenna lately and the two have rekindled their relationship. And feel happier than ever.

Even going as far as to make public displays. Including at the charity event!

And Leo’s speech didn’t stop there. You see it convinced Dominic to pursue a girl he liked and it also made Graham second guess his relationship with Beth. So Beth is now single and Natalie was last seen in bed with Dominic.