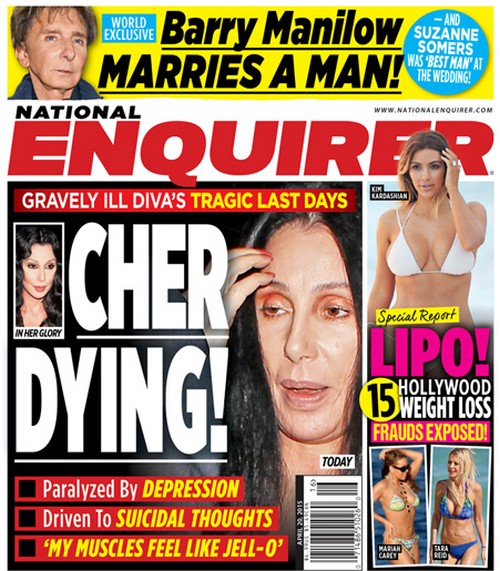 According to the latest cover issue of the National Enquirer, Cher is ‘paralyzed’ by depression and suicidal thoughts. The report claims that the 68-year-old super star is dealing with major health issues as her personal life and career spiral out of control. For example, Cher’s D2K tour ended up having 29 shows cancelled at the last minute, which left Cher reeling and just added an additional strain on her career.

Plus, Cher is reportedly feuding with her estranged son, Elijah Blue Allman, as she forces him and his new bride to leave their Malibu home. And all this while Cher allegedly battles the Epstein-Barr virus, which reportedly caused issues with her heart and kidney.

A source tells the Enquirer, “She’s tired at almost 70. Tired of fighting battles for everyone, her neighbors and her own family. She’s truly depressed!”

Sources close to Cher confirmed that doctors had given her a heart monitor to keep track of her health as it worsens, but that Cher’s not letting any of this get her down for good. In fact, she’s scheduled to make a public appearance in Brazil on April 10th, proving that just because you have a debilitating health issue doesn’t mean you should shut yourself in and never leave the house.

The Enquirer also has a story about Barry Manilow marrying a man, and a feature on 15 Hollywood weight loss frauds exposed – i.e., plastic surgery and liposuction, anyone?

What do you guys think about Cher’s health issues, her battle with Epstein-Barr, and her alleged depression?  Do you think Cher’s failing health will lead to more career issues down the line, or will she somehow manage to make a valiant comeback from all her struggles? Plus, will her family issues resolve themselves, especially if her health worsens?