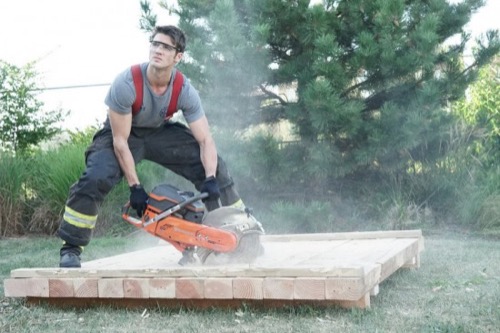 Tonight on NBC Chicago Fire returns with an all new Tuesday, October 27, season 4 episode 3 called, “I Walk Away” and we have your weekly recap below. On tonight’s episode, evidence that seems to exonerate Boden (Eamonn Walker) may not be enough; Brett (Kara Killmer) and Chili (Dora Madison) find themselves in a precarious situation.

On the last episode, Boden’s job was on the line pending an internal investigation; Severide adjusted to Patterson, his new commanding officer; Dawson shook things up at the work; Casey searched for important evidence in his investigation of Nesbitt; and Herrmann tried to keep the peace with Molly’s new neighbors. Did you watch the episode? If you missed it we have a full and detailed recap, right here for you.

On tonight’s episode as per the NBC synopsis, “evidence that seems to exonerate Boden may not be enough; Brett and Chili find themselves in a precarious situation; the team responds to a stuck elevator in a hotel; and Jimmy Borrelli’s older brother wants him transferred to a different house.”

Tonight’s season 4 episode 3 looks like it is going to be great and you won’t want to miss it, so be sure to tune in for our live coverage of NBC’s Chicago Fire.

After everything that’s happened, what with an internal affairs now breathing down their necks, Chief Boden knew his squad couldn’t afford to make another mistake.

The Chief had been personally advised to keep his head down. And later he invited the captains out to breakfast where he informed them to continue on as if nothing was the matter. So he didn’t want the investigation to affect their work and what he really wanted after such a trying time to prove how worth was for Firehouse 51 to return to normal.

That’s why he spoke with the captains. He wanted them to keep their men in line and once he dealt with them he then chose to also speak with Brett. Brett had delivered a baby awhile back and it seems she kept on visiting him at the hospital. Now the Chief understood why she felt there was a connection between her and this baby, the child did after all lose its mother on the same day it was born, but he told Brett that she couldn’t get attached.

How thing work in their line of business is that they’re there when they are needed and leave after a job is done. And that’s a philosophy he purposely endorsed when they got emergency call from 24th street again.

24th Street was where the fire at the crack house happen and the latest call out there had fortunately not been blocked off by neighbors. In fact the neighborhood put up no forms of resistance the second time around because it was one of their own that injured. A moving trunk had collapsed on a family man that was just trying to move said family out of neighborhood.

So at first there were going to move the truck off the victim’s leg yet Brett made them stop. She said the man would bleed out if they did. Therefore they had to call for a surgeon and amputate the leg. And though that wasn’t what his wife Tricia originally wanted for him, she was told that it would be the only way to save her husband’s life.

And the man was saved. Even if there wasn’t a single person that applauded afterwards. But Tricia did at least remember what the squad did for her husband and she later gave them a tape her sons had created on the day of the fire. The tape proved their tried to answer the call that day and that they were stopped from tending to fire right away.

Though that tape proved a few more other things as well. It made Dawson realize that it wasn’t the neighbors that had set the fire and if it wasn’t them that begs a question why would arsonist choose that particular house? So she began to look into the matter and a certain name kept popping up after she noticed a pattern in burnt properties.

Roger Maddox who happens to be a property developer went on to buy mostly houses in up and coming neighborhoods that have suffered fire damage. Those type of houses are usually sold on a cheap but they each had higher initial values before the fires. And Roger bought them all up.

So Dawson presented her superior with all the evidence she’s collected and he said he was going to open an official investigation. However Dawson was upset that CFD couldn’t just bring this Roger in for questioning. She felt like her bosses were taking it too slow and couldn’t be bothered so that made her turn to her old Chief Boden. Dawson knew he would know what to do.

And he did. He was going to take Dawson’s evidence to the Times and let public opinion decided what was going to happen next in the case.

But Brett wasn’t doing so good. She tried to shut her feelings off for the baby and instead she searched for the child’s father. She used her association with Officer Roman to locate the man that had essentially abandon his child and at first it looked like she was going to attempt to convince him into being a father. Only that’s not what she did. She simply told the man that she was technically the first set of hands that his son had ever known and that the baby was doing ok.

And apparently that was enough. The father eventually went down to the hospital and he’s assumed responsibility. Though it doesn’t feel like it’s officially over for Brett.

Nor for the matter did it feel over for Jimmy at House 51. His big brother wanted him to transfer out. You know to a house that hadn’t been under investigation. Only Jimmy refused to. He said he felt like 51 was the best place for him and hopefully that proves to be true.

Because the Chief is under fire for that article in the Times. His superiors demanded evidence in regards for his comments against Roger Maddox and, luckily for him, Dawson had evidence. She had it right up until she gave it to her boss and deleted everything.

So when she saw that everything was gone, she started to experience cramping.