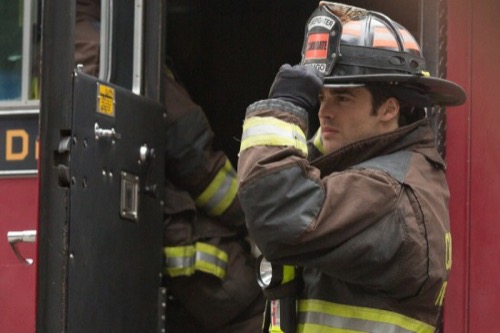 Tonight on NBC Chicago Fire premieres with an all new Tuesday, October 20, season 4 episode 2 called, “A Taste of Panama City” and we have your weekly recap below. On tonight’s episode, Boden’s (Eamonn Walker) job is on the line pending an internal investigation.

On the last episode, in the season 4 premiere, Casey was placed in a dangerous situation while working undercover to bring down a trafficking ring being run out of Nesbitt’s club; and the squad’s high turnover rate resulted in an unwelcomed surprise for Severide. In other events, Dawson recognized that her life was about to change; a new candidate made an unusual first impression; and residents banded together to protest a drug den in their neighborhood. Did you watch the episode? If you missed it we have a full and detailed recap, right here for you.

On tonight’s episode as per the NBC synopsis, “Boden’s job is on the line pending an internal investigation; Severide adjusts to Patterson, his new commanding officer; Dawson shakes things up at the work; Casey searches for important evidence in his investigation of Nesbitt; and Herrmann tries to keep the peace with Molly’s new neighbors.”

Tonight’s season 4 episode 2  looks like it is going to be great and you won’t want to miss it, so be sure to tune in for our live coverage of NBC’s Chicago Fire.

Last week it was revealed that Severide had been stripped of his rank so that has left the man in question to ponder his future at Firehouse 51. His first instinct upon being demoted was to resign right away but then Cruz had spoken with him. And he told Severide that he counted him as an inspiration. So tonight’s episode of Chicago Fire did not begin with Severide making a big announcement. That, surprisingly, turned out to be Dawson and Casey.

The couple had apparently been thinking over their options and they’ve decided that Dawson should transfer to the arson’s unit. She’s pregnant so she can’t necessarily continue to ride the truck anymore. Though the couple hadn’t been planning on telling anyone about the pregnancy until they had crossed the crucial 12 week mark.

Thus it was not part of a plan to first tell the chief and then the whole squad about the real reason Dawson was transferring out when she still in the early stages. Yet that’s what happened. People were naturally curious about the transfer and Dawson just couldn’t resist.

So the firehouse was happy for her and they had even promise to keep the pregnancy a secret until she was ready. But Connie was a different story. She had been there when they all swore not to spread the word and then she talked to her friend from SoulCycle that ended up being Dawson’s newest co-worker. Therefore everyone at the new job found were about the baby.

Although the baby’s father wasn’t all that concerned about the rumor mill. He had other things on his mind like the recent visit that Nesbitt paid him. Nesbitt it seems wanted to work with Casey on finding Katya’s notebook because he claims they’re on the same side. He told the other man that they both entered the game for the right reasons and that he wanted to end the vicious cycle of violence just as much as Casey. Which was crap but luckily Casey hadn’t bought into Nesbitt’s lies.

Casey later went to Hank Voight of the Chicago PD’s offices and he told him about his suspicions. Rather than help Nesbitt, Casey believes the notebook was the one thing that could take Nesbitt down and that’s probably why Nesbitt wants it so much. So Casey wanted Voight to continue looking for the notebook. Yet Voight tried that and it’s been a while since everything had gone down.

Therefore the trail, if there still was one, was cold.

Everyone had moved on and it was only Nesbitt and Casey that hadn’t let the notebook situation go. So Casey began to feel desperate right around the time his own firehouse was coming down under attack. Remember that fire at the crack house last week? Well it was being investigated and the honchoes at HR were demanding that internal affairs open an investigation into whether or not the firehouse was negligent in responding to call.

So Dawson tried to do her part on the arson’s team and investigate the crack house fire but she was warned. Her new boss liked her gumption and so he told her that even if they captured a guy holding tank of gas and matches – proving arson would still be hard. Therefore he wanted her to manage her expectations. And continue doing what she was doing despite any setbacks she could come across.

However Dawson brought the case files for the crack house home with her and Casey got an idea after looking at them.

Earlier, Dawson had inadvertently found a kill wall at the site and that meant there was a second fired that was covered up be sheetrock. So Casey got an idea about where Katya’s notebook was. He thought it was still at the club but hidden behind sheetrock that had recently gone up at the time. And he was right.

Casey snuck back into the club and went digging into the wall where he eventually found the notebook. So all that was left was for him to deliver the notebook to the authorities. And that was easier said than done.

Nesbitt had been following Casey’s whereabouts and so he saw when Casey collected the notebook and was going to kill him for it. Though fortunately Nesbitt wasn’t the only one following Casey around. Voight had put his own detail on Casey as well and so they caught Nesbitt red-handed.

Nesbitt had the notebook in one hand and the other holding a gun that was pointed at Casey. So the police department of good ole Chicago had enough to arrest him.

And as for the trouble that Molly’s has been experiencing, Herrmann is taking care of it. Those expats from Portland that had snootily tried to shut down his bar because of the noise are about to be introduced to karaoke night. A new thing that Herrmann is starting as part of his noise warfare.

But Severide is finding out that living under Captain Patterson’s rule is going to be pure hell. And that might sway into making a rash decision.