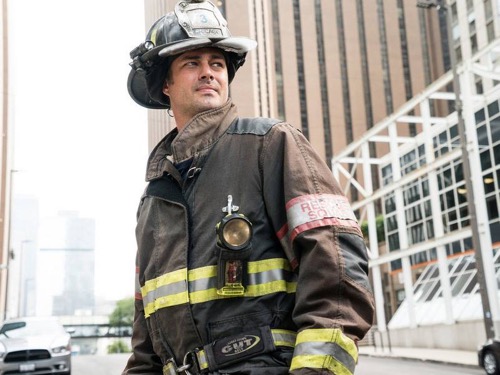 Tonight on NBC Chicago Fire returns with an all new Tuesday, November 3, season 4 episode 4 called, “Your Day Is Coming” and we have your weekly recap below. On tonight’s episode, the squad members come together to support one of their own.

On the last episode, evidence that seemed to exonerate Boden may not have been enough; Brett and Chili found themselves in a precarious situation; the team responded to a stuck elevator in a hotel; and Jimmy Borrelli’s older brother wanted him transferred to a different house. Did you watch the episode? If you missed it we have a full and detailed recap, right here for you.

On tonight’s episode as per the NBC synopsis, “the squad members come together to support one of their own; Herrmann tries to figure out how to reopen Molly’s after it gets shut down; and Severide digs deep into the arson investigation.”

Tonight’s season 4 episode 4 looks like it is going to be great and you won’t want to miss it, so be sure to tune in for our live coverage of NBC’s Chicago Fire.

Dawson began feeling some pain in abdomen last week because of an incident involving her new boss in the Arson Unit. However Casey didn’t care about what she was working on, he was more focused on her health. And unfortunately it had been compromised.

Dawson’s cramp was actual a symptom from bleeding out on the inside. Therefore the doctors down at Chicago Med couldn’t afford to wait around until her pregnancy stabilized. They just had to go in as soon as possible. Though Dr. Will Halstead was kind enough to warn Casey beforehand.

He said that when he goes in, his first priority was going to be Dawson and not the baby. So Casey was left with an understanding in the back of his mind that there wasn’t much of a chance for the baby to survive. Yet it still came as a blow when the doctor told him Dawson had miscarried.

But he tried to comfort the other man by saying it simply wasn’t a viable pregnancy. Meaning it might not have been the shock from earlier that caused her miscarriage. It was just always not meant to be and Dawson could have likely have miscarried under the best circumstances.

Yet that’s not what she or the Firehouse believe. They believe someone purposely removed all pieces of evidence that showed the real estate magnate Maddox had initially set fires to drive down the asking price for buildings in up and coming areas. So Severide didn’t waste anytime confronting his ex who somehow wrangled her way into becoming Maddox’s latest attorney.

Severide simply went down to her office and accused Jamie of telling Maddox about the evidence. After all, at the time, she was the only one Maddox’s team that had inside knowledge of Dawson’s investigation being as she was there when Dawson had brought paperwork home with her. And so Jamie had seen the files for herself, but claimed not to have been behind the theft.

So Severide kept looking and he got a friend from the Police Department to come down and check out the Chief of the Arson Unit’s computer. The chief had been a friend so Severide didn’t believe he could erase evidence. However there had been a third person brought in on the case and Mouse did find out that the computer had been hacked from someone with prior knowledge.

And that’s where Susie Wilder comes in. Susie was the chief’s second in command and so she had both access as well as knowledge of the files Dawson had gathered. Yet Susie had called in sick the second they found out the system had been erased. So Mouse felt it was finally time to bring in the rest of Chicago PD.

If guilty, Susie’s offence could carry out a lengthy sentence. Thus the Police Department had to check out her alibi and thankfully Susie had been surrounded by witnesses when someone hacked in.

But with Susie cleared, that left only Severide’s close friend and Dawson’s boss. So Severide had to ask even though he didn’t want to. He asked Duff if he had been the one to tamper with evidence and Duff swore he didn’t do it.

Though if it wasn’t him then who else could have done it? That was the question that was plaguing Severide even as heard Dawson’s health had taken a turn for the worst. Apparently there had been a piece of the placenta that had accidentally been overlooked so that caused Dawson to bleed out again. And she had to be rushed back into the OR.

So the whole house was worried about Dawson but the new cadet tried to turn around the tide of bad news by looking into Molly’s so that he could get it reopened. Those Portland transplants had eventually figured out a way to close down the bar. And all they had to was tell city officials that it was 13 feet from the sidewalk rather than the mandated 15 feet.

Therefore Jimmy asked his cousin Anthony to look into Molly’s for him and Anthony managed to figure something out. It seems he checked out the limestone brick on the outside of Molly’s and he found out it had historical promise. So that’s when and Jimmy came up with a plan. They went down to the City Hall and they had Molly’s declared a landmark.

And what that means is no one can legally tamper with the building. Plus Herrmann gets to keep his bar open despite it being only 13 feet from the sidewalk.

So Jimmy did good on tonight’s episode of “Chicago Fire” and he had also impressed Chili in the process. Which looked like his biggest motivation in doing what he did. But, in the end, Severide found out his friend Duff had betrayed him. Duff had deleted the files. Yet he hadn’t gotten rid of the paperwork so he had it dropped off outside of Severide’s old office.

And after he had dropped of those files, Duff had tried to kill himself by jumping off a bridge. Only Severide had to jump in the river after him. So he was able to save the other man’s life but there was no saving their former friendship.

So that night Molly’s like always and again like always Herrmann knew just what to say to Dawson to help her in the time of need.